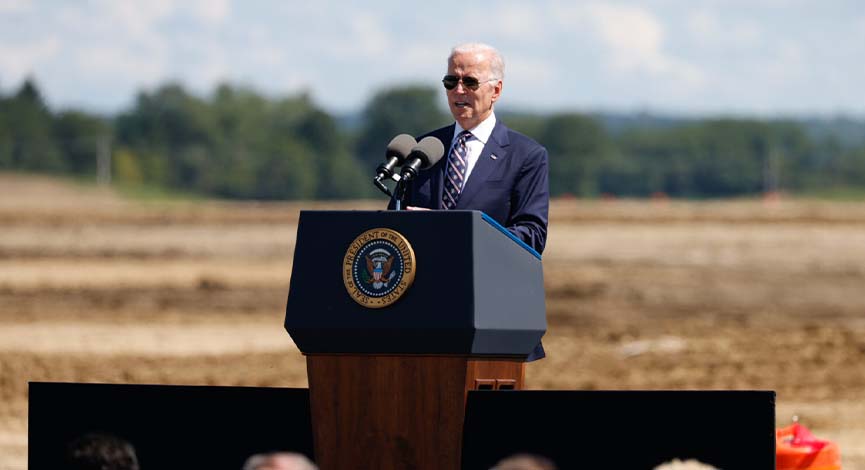 White tents sprung up like mushrooms Friday on the dusty patch of dirt where Intel is building two microchip factories. Returning to a line from his last state of the union address, President Biden called it a “field of dreams” serving notice that “the industrial Midwest is back.”

“Since I took office, our economy has created nearly 10 million new jobs,” Biden trumpeted. “More than 668,000 manufacturing jobs prove the point that made in Ohio and made in America is no longer just a slogan — it’s happening.” 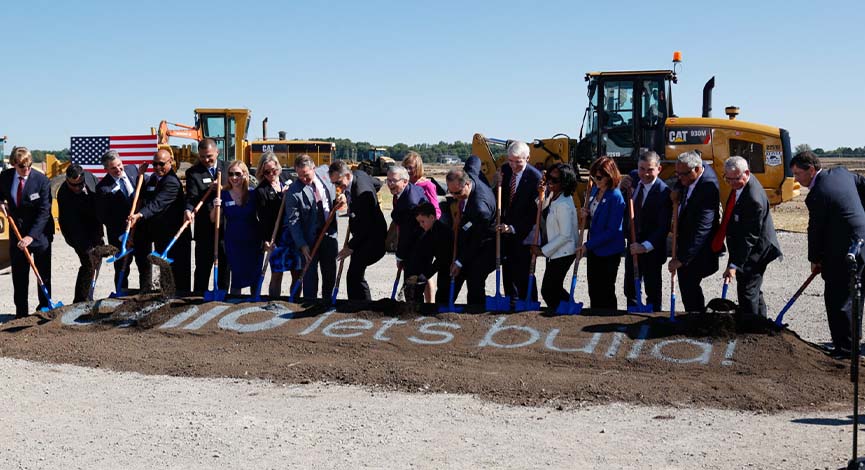 Inside the main tent, waiters brought out finger sandwiches and canapes while nearly every political, business, and education figure from within 50 miles milled around making small talk. Outside, the sun beat down on a cobalt blue sheet of AstroTurf lined with white chairs. The constant clank and rattle of earthmovers blended with the faint smell of manure.

The facilities, or “fabs,” which the company dubs “Silicon Heartland” provide a singular answer to a long list of political worries. Concerned about the supply chain? Inflation? Jobs moving to the coasts? Jobs moving overseas? Competition from China? Intel’s investment in Ohio offers a comforting response.

“I tell you,” he told the crowd, “initially when we started this project, I thought it was gonna take us another year and a half basically to get through the permits, get the lines going. And right behind me, we already started.”

The tractors crawling over the site attest to that work starting weeks or even months ago, but Friday marked its ceremonial beginning. Gov. Mike DeWine, Lt. Gov. Jon Husted, U.S. Reps. Mike Carey, R-OH, Troy Balderson, R-OH, U.S. Sen. Rob Portman, R-OH, and a handful of Intel executives plunged shovels into a purpose-made mound of dirt for the cameras.

DeWine described a future where students from universities, community colleges, trade schools, and career centers all flow to this site. He argued that talent pool will lay the foundation for “the third and fourth fabs, the fifth and sixth fabs, and the seventh and eighth fabs, and on and on.” 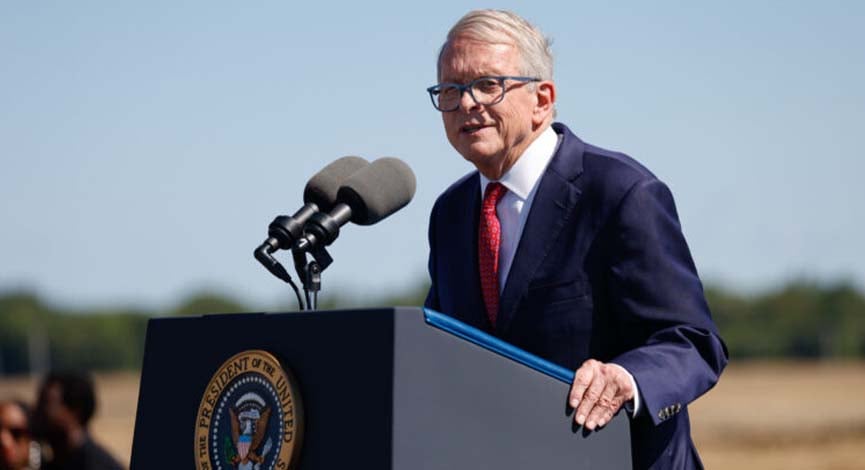 “This is a great victory and it is just the beginning,” DeWine said.

“In the days and months and years to come, there will be many more victories in Ohio,” he went on. “Because we are investing in and preparing our young people and our older people for the future — a future that is bright, a future that holds great promise, and a future where all Ohioans, all Ohioans, can live their American dream.”

Intel laid the first few bricks in that workforce education plan Friday as well. The company announced a $17.7 million investment in higher ed programs that will help train the engineers and technicians they’ll one day employ.

“It’s not low-end workers. It’s not medium. It’s not the highest PhD. It’s not construction workers,” Intel CEO Pat Gelsinger said. “It is all of them across the entire spectrum is what we need.”

He described joining the company after getting an associate’s degree and working his way up. Gelsinger earned a bachelor’s degree and a master’s while working for Intel.

Intel officials say they plan to eventually put $50 million into the education pipeline to prepare some 9,000 workers for jobs in the field. But given how the initial investment is diluted over space (eight programs tying in 80+ institutions) and time (three years), it begins to look modest. 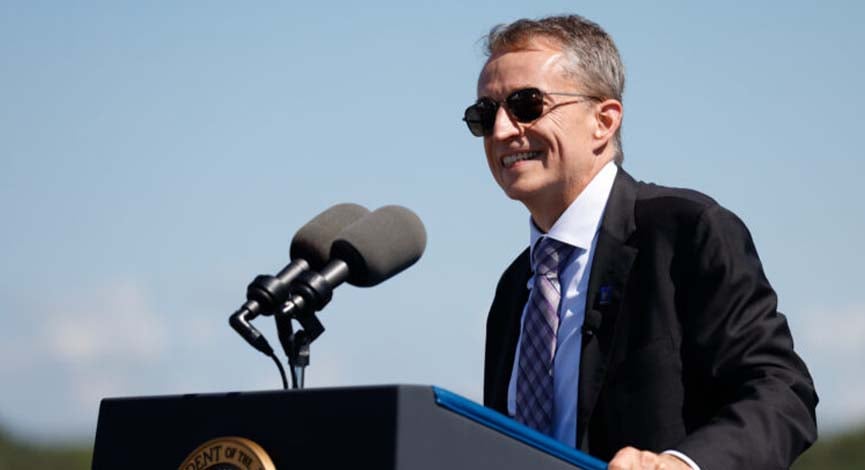 Columbus State president David Harrison was quick to push back on that.

He explained all 23 community colleges have existing programs roughly aligned with Intel’s needs, and the company’s input will help them harmonize their efforts. Harrison went on to argue those dollars can help prime the pump for further investment down the line.

“You know, if I look at other private investments we’ve had from JP Morgan Chase, from AEP as examples, those were absolutely catalysts for federal funding, and other state opportunities, and even have allowed us to influence policy by developing case statements around success stories,” Harrison described. “This will absolutely be fuel for that.”

But the biggest employment demand, and the most immediate, will be for construction workers. Intel believes building the fab will require 7,000 of them. They only expect to employ about 3,000 people to run the facility once it’s done.

Building the structure will be a limited term job, but speaking the day before the groundbreaking, Dorsey Hager predicted a long tail of projects for those construction workers. The Central Ohio Building and Construction Trades executive secretary offered Facebook’s entry into the region as example.

“They basically said we’re like a McDonald’s,” Hager recalled. “When you get off an exit (and) you see a McDonald’s, you always see a Burger King and a Wendy’s. (They were) absolutely right. That’s why Google’s here. That’s why Amazon is also here.”

From the stage, speakers shared a steady stream of mutual appreciation. U.S. Sen. Rob Portman described it as an “honor” to lead the push for the CHIPS Act in the Senate. That measure provides federal funding for companies making semiconductors in America, and Intel insisted its passage was crucial to their long-term expansion plans in Ohio.

“Each of my Senate and House colleagues here today played an important role,” he said. “In this case, at least, Congress put partisanship aside and focused on how to close the growing gap in semiconductors and other technologies that will ultimately determine the fate of nations.”

Portman could afford to be magnanimous. The retiring two term senator won’t be appearing on this November’s ballot. Helping to pass the CHIPS Act and negotiate the bipartisan infrastructure package may wind up the being the signal achievements of Portman’s final act in public office, but they also only papered over abiding partisan disagreements.

Senate Republicans had initially threatened to block the CHIPS Act to hold off a broader Democratic spending package. But shortly after the CHIPS Act passed, and that leverage was gone, long-stalled negotiations came back to life for what eventually became the Inflation Reduction Act. Needless to say, there have been some hard feelings among Republicans about getting out-maneuvered on two significant spending measures.

So, while Ryan sees a starting point, across the aisle, Rep. Troy Balderson is more inclined to tap the brakes.

“Let’s not get too far ahead of ourselves and start funneling more money, doing more projects,” Balderson cautioned. “We know what the needs are right now to get this going. Let’s focus on that and get that done first, and then we can do this piece-by-piece, day-by-day.” 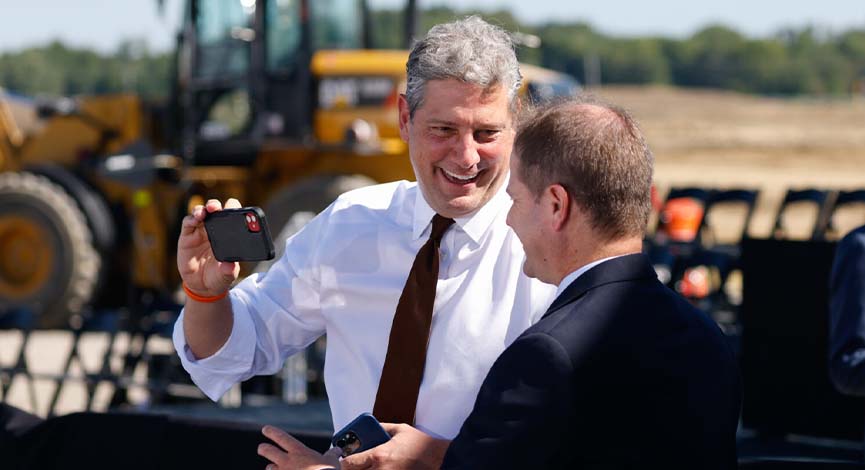 And differences of opinion about public spending weren’t the only political divisions on display.

Ryan, who has been desperately trying to distance himself from the president and his own party, offered a lukewarm response to questions about Biden pursuing reelection in 2024.

In an interview with WFMJ in Youngstown the day before the groundbreaking, Ryan didn’t explicitly voice opposition to a Biden running again, but said he wanted to see a “generational move” from both parties.

Friday, he elaborated that “I’ve been saying this since 2016,” and “This is what President Biden said too, he’s going to be a bridge to the next generation.”

“I think, guys like (Senate Minority Leader Mitch) McConnell should not be running,” he added. “To me, I think it’s just got to be, we need a generational shift. That’s my, it’s my opinion.”

Pressed on the same point in a different interview Ryan said “well, that’s up to him,” about Biden seeking reelection.

A campaign spokesman for Ryan’s opponent, Republican J.D. Vance, lashed out in statement calling Ryan a “two-faced fraud” for undercutting Biden and then standing alongside him.

“Remember, this is the same Tim Ryan who votes with Joe Biden 100% of the time in Washington, DC and who endorsed Joe Biden for President in the 2020 Democrat Primary over numerous other options,” he went on. “Tim Ryan can’t run away from his own record of supporting Biden and his leftwing agenda no matter how many times he decides to flip and flop.”