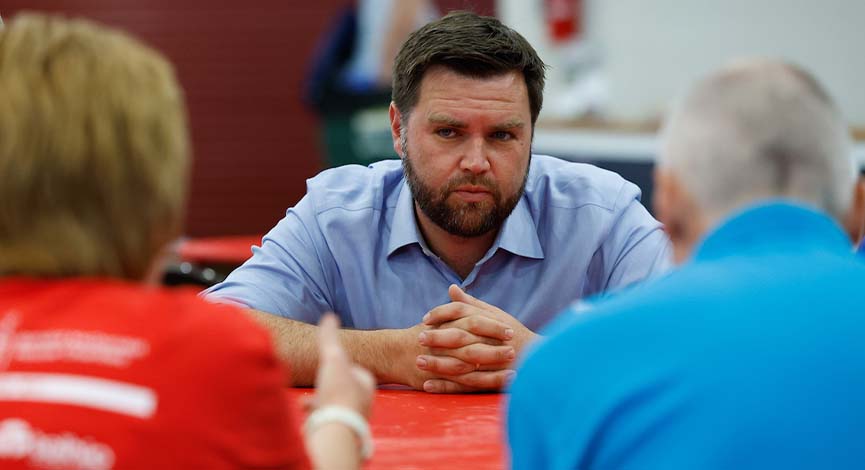 Republicans running for the U.S. Senate and governor’s office in Ohio declined to face their opponents in a debate, organizers announced Wednesday.

Both incumbent Gov. Mike DeWine and U.S. Senate candidate J.D. Vance will not appear at the planned October forums hosted by the Ohio Debate Commission, an independent outfit with ties to media around the state. The gubernatorial race now has zero debates on the horizon, and the Senate race is hardly looking more hopeful on the subject.

“This election year has been plagued with candidates from both parties who prize their campaign consultants’ input over voters’ information needs. When 84% of Ohioans are saying they want debates and campaigns refuse a good faith offer from a statewide organization, democracy is paying the price.”

In both races, the Democratic candidates have lambasted their rivals’ apparent unwillingness to debate in public — without the filter of political handlers or media outlets. Both have emphasized a recent USA TODAY Network Ohio/Suffolk University poll indicating 84% of Ohioans want to see their candidates debate.

Democratic gubernatorial candidate Nan Whaley has criticized DeWine’s refusal to debate and his noncommittal statements on the subject over the past few weeks. DeWine has said his openness to interviews, newspaper editorial meetings, and decades in office are enough for voters to consider.

The Senate debate prognosis is more of a mess.

Vance spurned the ODC debate, with a spokesman calling its executive director a “liberal Tim Ryan donor who has repeatedly and publicly smeared Republicans.” On Monday, in the hours before the deadline to respond to ODC’s debate invitation, two conservative media outlets published stories noting the moderator’s history of contributing $250 to Tim Ryan in 2014 and running for office as a Democrat in 2014 and 2016. FEC records show the director, Jill Zimon, ceased donating to politicians in 2018.

Meanwhile, WFMJ invited both Senate candidates to debate in July. Ryan agreed. Vance has not.

“We have no feedback or answer from the Vance campaign as to whether they are or are not interested,” said news director Mona Alexander.

The Vance campaign declined to comment on the WFMJ matter.

Ryan’s campaign said he won’t do the Nexstar debate because he already committed to the WLWT event. In a statement, he accused Vance of trying to “double-book” himself as an excuse. Vance declined to comment on the WLWT event.

Jeff Benscoter, news director for WLWT, said in an email that both campaigns have “formally agreed to debate on WLWT” but they’re still finalizing a date.

A Nexstar spokesman didn’t respond to an inquiry.

Both Whaley and Ryan expressed frustration with the lack of debates — a longstanding tradition in American politics.

“This is incredibly disappointing. I agreed to this and numerous other debates across Ohio,” Whaley said. “I guess Mike DeWine is too big of a coward to defend his record. Ohio deserves better.”

A DeWine spokesman did not respond to an inquiry.

Ryan’s campaign, in a statement, criticized Vance, noting he participated in an ODC debate in the Republican primary.

“Tim Ryan remains as eager as ever to debate JD Vance, but in order for that to happen, JD needs to stop hiding from debate organizers and trying to back out of forums both candidates have already committed to,” said Ryan’s campaign manager Dave Chase in a statement. “All we want is JD and his team to stop playing games and have the courtesy to respond to these reputable news outlets attempting to give Ohio voters the fair debate they deserve.”

The refusal to publicly debate follows the steady tapering away of democratic norms on the political right. Republicans have similarly declined Senate debates around the country. The New York Times reports that four Republican-controlled states (including Ohio) will hold elections this year on redistricting maps that their state supreme courts have found to be unconstitutional gerrymanders. Polls from different universities in the last two years have found between 60% and 80% of Republicans falsely believe the election was stolen — a claim echoed by Vance. Republican state legislatures around the U.S. in 2021 passed dozens of voter restrictions around mail voting, voter registration, voter identification requirements, and others.