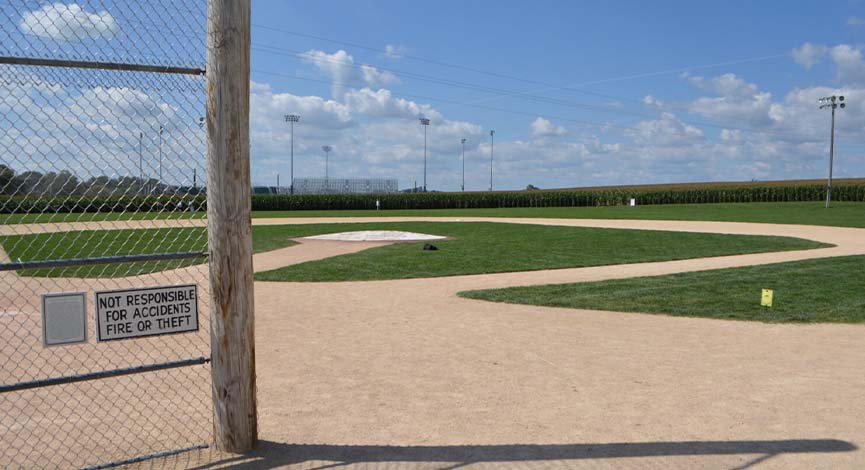 The “Field of Dreams” field. Photo by Denis Smith.
ShareTweet

President Joe Biden’s recent address about the threat to our democracy posed by Donald Trump and his MAGA followers affirmed what many Americans have felt for years. He identified the problem in the most direct way.

“Too much of what’s happening in our country today is not normal,” the president told the nation as he stood in front of Independence Hall in Philadelphia.

He spoke those words just days before a man stole a plane in Mississippi, flew the twin-engine aircraft erratically for hours, and threatened to crash it into a WalMart.

Aside from those traumatic troubles in Tupelo, a tour last week with a group of individuals through several Midwest states presaged some of the salient points in the president’s speech, helping me to focus on what we in this country may soon face.

As our bus threaded its way through the bountiful Iowa cornfields, the tour director, without fanfare, quietly placed a DVD into the vehicle’s video system, stimulating sleepy passengers, otherwise zoned from looking at endless farmland.

Within seconds, as the monitors flickered on, the tour members immediately identified the images from the iconic 1989 film, “Field of Dreams.”

It was no surprise to see the movie on the motorcoach’s monitors inasmuch as we were scheduled to stop later in the day in Dyersvllle, where “Field of Dreams” was filmed. And if there was one piece of dialogue our group anticipated hearing yet again, it was that now immortal voice in the character Ray Kinsella’s head which told him, “If you build it, he will come.”

But after viewing the film for at least the second time, I am now assured that based on the current state of national division, there is another piece of dialogue from “Field of Dreams” that will in time be remembered even more than if you build it.

In a gripping scene, Ray (Kevin Costner), relates to his new friend Terence Mann (James Earl Jones), about a heated conversation he had years earlier with his father. That discussion was about Chicago White Sox outfielder Shoeless Joe Jackson and the money he took from gamblers to throw the 1919 World Series.

“I could never respect a man whose hero was a criminal,” Ray told his dad.

The fact that Jackson was later acquitted by a jury did not change the national judgment that he was indeed guilty of collusion, forcing Baseball Commissioner Kenesaw Mountain Landis to ban him forever from having any involvement with the game.

That fact is important in anticipating what might happen next in these dramatic times, when people are shaken by an errant plane rattling and rolling over Elvis Presley’s hometown.

Now, as each day brings more and more revelations about the conduct of a twice-impeached and disgraced former president, including possible charges of espionage for his theft of government documents containing this nation’s most vital national security secrets that were found in his Florida home, combined with his role in the Jan. 6 insurrection, most Americans are beginning to accept the fact that Donald Trump, like Shoeless Joe, may indeed be a criminal.

As difficult as the acceptance of that thought might be to some Americans, we are back to examining the implication of Trump’s criminality with our fellow citizens, and particularly those neighbors and friends who, in spite of daily revelations, remain his most ardent supporters.

Indeed, we are, according to many legal experts, just weeks from criminal indictments against Trump and some of his aides. What then?

The developing shift in public opinion, particularly among independent voters and  a residue of sane Republicans, is having some effect in directing the national conversation regarding Trump’s flagrant violation of law and ethical behavior.

That leaves the hard core, the shock troops otherwise identified as MAGA Republicans, those True Believers who may never waver in their support of a former president awaiting indictment for crimes against the United States.

What then could this identification of MAGA Republicans as “a clear and present danger” to our democracy portend for the future, a potential Fifth Column that could further destabilize our now very fragile and imperfect Union?

More to the point, what happens in the near future when neighbors look over their fences and say to one neighbor about another, “I could never respect a man whose hero was a criminal.”

That statement resonates much more with me now than if you build it.

It is important to remember that it was an Indiana congressman who was asked about Richard Nixon’s guilt upon the release of the damning Oval Office transcripts.

“Don’t confuse me with the facts. I’ve got a closed mind,” Earl Landgrebe said in August 1974, hours before Nixon’s resignation.

Could that statement be a motto for the MAGA cult? After all, there is a big difference between magicians and MAGAcians, to be sure.

For the good of the country, let us fervently hope that MAGA Republicans won’t channel Earl Landgrebe but instead will painfully accept that their hero is a criminal, unworthy of respect.

Indeed, let’s also hope that these True Believers accept the self-evident truth spoken by Joe Biden, who told the nation that “you can’t love your country only when you win.”

Like the other questions posed here, we will find that answer soon enough. And we’ll also find out, after we more fully realize the importance of the documents stolen by the man who has to win at all costs, how much Donald Trump loves his country.