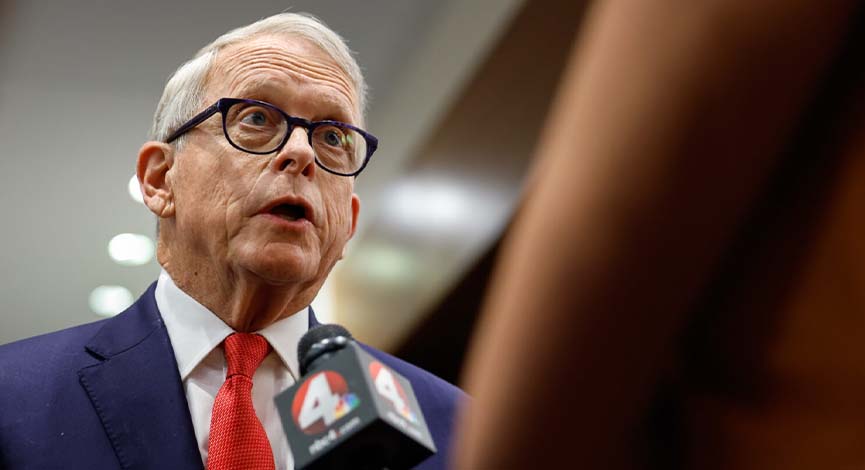 COLUMBUS, OH — AUGUST 26: Governor Mike DeWine talks with the press at a gubernatorial forum hosted by the Mid-Ohio Regional Planning Commission (MORPC) in partnership with the Ohio Association of Regional Councils (OARC), August 26, 2022, at the Hilton Columbus Downtown, in Columbus, Ohio. (Photo by Graham Stokes for the Ohio Capital Journal)
ShareTweet

In about two months Ohioans will decide on their next governor. But so far, Gov. Mike DeWine has refused to debate his Democratic challenger, former Dayton Mayor Nan Whaley.

“Throughout the fall, Governor DeWine and his opponent will have ample opportunity to outline their very different records and visions for Ohio,” a DeWine campaign spokeswoman said in an emailed statement.

She pointed to a recent policy forum, another planned for next month, and nodded to “the multiple Ohio newspaper endorsement screenings that have long served as de-facto debates.”

It’s just the latest entry in a long and vibrant tradition of Ohio politicians avoiding public debates. In 1974, Jim Rhodes gave the City Club of Cleveland the OK to put an empty chair on stage when he refused to debate then-Gov. John Gilligan.

That’s not how this dance usually goes.

In general, challengers are champing at the bit to get on the debate stage early and often. Incumbents meanwhile, tend to push for a limited debate schedule. DeWine has found himself on both sides of that argument.

Thanks to the archives of the Columbus Dispatch, it’s possible to track much of DeWine’s record.

DeWine’s first few positions in public service fall into a category that don’t usually generate significant campaign coverage. Between 1977 and 1990, DeWine climbed from Greene County prosecutor, to the state Senate and then to the U.S. House of Representatives.

These local or regional offices don’t always feature a debate. Even when they do, those events don’t always generate broad news coverage. An archive search yielded no examples of DeWine debating — or refusing to debate — during that initial stretch of his political career.

His campaign didn’t offer a statement about his record during that time.

Once DeWine began running statewide, the picture becomes much clearer. In 1990, he joined the George Voinovich gubernatorial ticket.

Early on, Bob Taft challenged Voinovich to four televised GOP primary debates. Instead, Voinovich sewed up the backing of then pivotal Franklin County Republicans and hired Roger Ailes as his media consultant. Taft decided to run for secretary of state.

In the general election, DeWine debated Democratic candidate for lieutenant governor Eugene Branstool. An article at the time described it as the “tamest” of the bunch, with DeWine insisting “Gene, that’s a low blow,” after criticism for his vote on a federal tax measure.

DeWine signed on as Voinovich’s number two after a commitment they would “redefine” the lieutenant governor’s role. He didn’t sit still for long.

In February of ’92, a little over a year into his term, DeWine announced he’d run against Democratic U.S. Sen. John Glenn. Voinovich agreed to be his campaign chairman but admitted to “mixed emotions,” according to a Dispatch story at the time.

During the primary, George Rhodes pushed DeWine to debate. Instead, DeWine went to a campaign event with President George H.W. Bush in Cleveland. DeWine’s campaign said Rhodes’ invitation arrived after they committed to the event with the president. The campaign wasn’t eager for a rain check.

“I don’t think there will be a debate between now and Election Day,” DeWine’s campaign manager said.

In the general, however, DeWine eagerly pursued debates with the incumbent. His campaign’s opening bid was for a total of six — four of them televised. They wound up holding one televised primetime debate.

In another debate at the City Club of Cleveland they traded nick names. DeWine was the “sultan of sleaze” Glenn said. DeWine called Glenn “senator” but couldn’t resist sharing that his advisors wanted “king of crybabies” or “wizard of whiners.”

Their chief attacks against one another now seem similarly quaint. Glenn was sitting on a $3 million dollar debt from a previous presidential bid. DeWine bounced checks while in Congress and accepted paid speaking gigs.

This time around, DeWine couldn’t get enough of the debate stage. During the primary, he and his rivals met for a whopping eight debates. George Rhodes — the Republican DeWine beat in 1992 — even got invited to a few of them.

After sewing up the nomination, DeWine set his sights on the Democratic nominee businessman Joel Hyatt — and only Hyatt. Although DeWine agreed to three debates with the Democrat, he refused to participate if independent Joseph Slovenec was part of the event.

Hyatt’s team suggested DeWine was worried Slovenec would split the GOP by raising the issue of abortion. Slovenec took a hardline, no exceptions position against the procedure, while DeWine favored exceptions for rape, incest, or the life of the mother. DeWine’s position now is a bit murky as he signed Senate Bill 23 into law that has no exceptions for rape or incest, but does for protection of the life of the mother. After the U.S. Supreme Court overturned abortion rights this summer, the 2019 Senate Bill 23 became law.

DeWine held to his refusal to debate Slovenec. That was likely a tad easier given his former boss George Voinovich’s reelection bid. Voinovich was fending off a conservative, independent challenger of his own in Billy Inmon, head of the state fair until Voinovich fired him in 1992. After Voinovich refused to debate him, Inmon held a hunger strike on the Statehouse lawn and eventually needed to be hospitalized.

DeWine and Voinovich both won handily.

When DeWine ran for reelection in 2000, he faced former congressman Frank Cremeans and gun show promoter Ronald Dickson. He ignored them both, picked up the party’s endorsement, and cruised to a primary win.

DeWine ran a similar campaign in the general against Ted Celeste, the brother of former governor Dick Celeste. A story was quick to note the apparent experience gap between 24-year political veteran DeWine and the first-time candidate across the stage.

Meanwhile, Democrats, still smarting from George W. Bush’s 2004 reelection and increasingly frustrated with the Iraq War, seemed primed for a massive wave election. In a series of four general election debates, DeWine tried to paint Democrat Sherrod Brown as “on the fringe of his own party.”

It got bad enough DeWine alleged an employee working for then-Secretary of State Brown became ill after eating a banana laced with marijuana. Turns out it was a brownie, the reporter corrected, but “there was no evidence Brown was aware of it.”

For his part, Brown hung the Iraq war around DeWine’s neck.

“I see no ideas, nothing new coming out of him or the Bush administration,” Brown said. “He’s always where George Bush is on the Iraq war.”

Come November that wave crashed across Ohio just as it did in many states around the country. Brown won the race handily.

After a few years in putting his law degree to use in private practice DeWine dipped his toe back into politics. First, he helped advise John McCain’s 2008 presidential campaign in Ohio, and two years after that he announced his bid for Attorney General.

Instead of the typical format with candidates standing behind a lectern trading barbs with their opponent, the candidates met in series of smaller forums. In one, Cordray, DeWine and two other candidates sat side by side on a kind of talk show set. Their moderators, from Lakeland Community College, sat across from them maybe six feet away, posing questions to the candidates in turn. The candidates met a few other times, but Cordray was frustrated they didn’t hold a traditional debate.

“Senator DeWine is trying to mislead Ohioans into thinking he wants a real discussion of ideas in this race when that is anything but the case,” Cordray’s campaign spokesman said in a Dispatch article. “The fact that Senator DeWine is disguising these events as political debates is dishonest to say the least.”

It might seem like a bit of a headscratcher that Cordray, the incumbent, was the one demanding more debates instead of his challenger DeWine. But just like the election that carried DeWine out of office in 2006, a wave was coming. Come November that wave swept DeWine into office.

DeWine didn’t see a primary challenger when he sought reelection in 2014. In the general election he faced former Hamilton County Commissioner David Pepper. The day after the primary, Pepper called for a total of five debates. A Dispatch story at the time noted “no immediate response” from DeWine.

The closest they got was a meeting with newspaper editors from Gannett. DeWine demanded Pepper “take down” an ad put out by a progressive group. Pepper said he had nothing to do with it and added, “I don’t need a lecture from someone who doctored 9/11 footage.” The reference was to a 2006 ad in which DeWine’s campaign added smoke footage of the Twin Towers attack.

DeWine won the nomination without much trouble. Afterward he once again faced off with Democratic nominee Richard Cordray.

Unlike DeWine’s first AG bid, he agreed to three debates with Cordray.

They fought over abortion, the opioid crisis, and a multi-million dollar homegrown Ohio scandal — not FirstEnergy though, ECOT, a shuttered for-profit private charter school that became mired in turmoil over fraudulent student attendance data.

In one exchange about the opioid crisis, DeWine criticized Cordray for backing a constitutional amendment that would’ve reduced sentences for drug possession. Cordray argued opioid deaths shot up under DeWine’s watch and compared taking his advice on drug policy to asking for directions from the captain of the Titanic.

Looking at DeWine’s overall record, he’s eagerly sought the debate stage and stubbornly avoided it whenever it has suited him. Sometimes he’s won and sometimes he’s lost, but it doesn’t appear he has paid a political price yet for ducking a debate.

If he holds out and refuses to debate Democratic nominee Nan Whaley, it won’t be unheard of, but DeWine will certainly be an outlier.

Jim Rhodes, the governor who left the chair open in 1974, didn’t debate in 1978 either. Dick Celeste beat him in the general election. In 1982, Celeste made a fuss about including the libertarian candidate, but he eventually agreed to a debate.

Since then, the major party candidates have held a general election debate in every single election save one — former Republican Gov. John Kasich’s refusal in 2014 to debate Democratic nominee Ed FitzGerald.