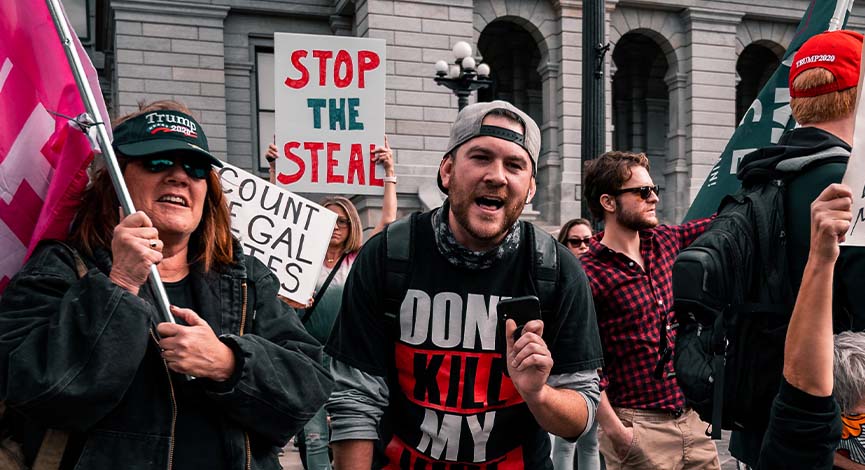 Adrian Fontes is tired of responding to the outrageous claims of Mark Finchem, a Trump-backed Republican election denier with ties to QAnon. Fontes faces Finchem on the ballot this year for Arizona secretary of state.

Finchem has said that if elected the state’s chief election official, he would ban early voting, move away from electronic vote counting, and allow state legislators to be able to reject election results. But he’s offered little rationale or explanation for his extreme proposals.

“He needs to explain himself and he’s not doing it,” Fontes said. “All he does is throw out these crazy theories, these crazy ideas, and nobody is asking him why.”

Much of Fontes’ frustration stems from the fact that he is not running in a typical race for Arizona’s top election official. Finchem isn’t a traditional Republican who might propose restrictions on voting, but would come to the campaign with explanations for why he believes his policies would protect the integrity of elections.

Instead, Fontes is running against someone who has said without evidence that the 2020 election was rigged and who marched on the U.S. Capitol on Jan. 6.

Election deniers are running for secretary of state in five critical states across the country, and the Democrats challenging them in November say their campaigns have taken on increased importance.

As Fontes put it, “It’s a great deal of pressure knowing you’re running in a political contest to save the republic.”

The stakes are just as high in Nevada, where Democrat Cisco Aguilar is looking to defeat Jim Marchant, an election denier who has parroted former President Donald Trump’s voter fraud conspiracies. In Michigan, New Mexico, and Minnesota, incumbent Democratic secretaries of state are seeking reelection against GOP candidates who have said that the 2020 election was not legitimate.

Colorado Secretary of State Jena Griswold, a Democrat who chairs the Democratic Association of Secretaries of State, said the Democratic candidates are feeling pressure to defeat “big lie” candidates who support Trump—those who will “suppress the vote, destabilize elections, and push out further lies.”

The association has given unprecedented levels of support to candidates this year, due to the high stakes. Before she became chair in 2019, the group had never had any full-time staff and now it employs six people. It’s also raised close to $20 million so far this cycle compared to a previous all-time high of $1.6 million, according to Griswold.

“We’re doing everything in our power to save democratic institutions,” she said.

“We have Democratic nominees across the country who will stand up for the fundamental right to vote for every eligible Republican, Democratic, and unaffiliated voter, and we’re up against people who are telling us that they will tilt elections away from the American people for their own political, partisan gain.”

Here’s a closer look at how two Democrats are running against election deniers who want to control elections:

Fontes, the Maricopa County recorder from 2017 through 2021, won the Democratic primary in August with more than 52 percent of the vote. As county recorder in Arizona’s most populous county, Fontes enacted significant changes to how Maricopa County runs elections, increasing the number of registered voters by almost 500,000 and setting records in 2020 for the number of early ballots cast.

In 2020, nearly 92 percent of Maricopa County voters sent in an early ballot.

Though he lost his bid for reelection, Fontes said he would bring some of the lessons he learned as recorder to the secretary of state’s office.

“I’m just a county election official who knows how to do this stuff and would be best suited to be Arizona’s next secretary of state,” he said.

Fontes said he’s not pleased that Finchem has drawn so much attention to their race by spewing falsehoods about the election system and proposing radical changes to voting procedures.

“Banning ballot by mail when 92 percent of our voters used it in 2020 and 88 percent of primary voters, including almost that many Republican primary voters? It’s a stupid idea,” he said. “I mean these are the people who actually vote, and he wants to force them to stand in line? Come on. That’s just dumb. If that isn’t clear evidence of poor judgment, I don’t know what is.”

Finchem has also called for Fontes’ arrest for rigging the 2020 election, a contest in which Fontes himself lost reelection. “What would the probable cause be?” Fontes asked. “He needs to explain himself.”

Fontes also worries what the future for election administration looks like if those with experience doing the job are pushed away because of threats and harassment and are replaced with people like Finchem who have no experience in elections.

“There’s an active campaign to gut election professionals out of the system by the very people who have no justification for doing it in the first place,” he said. “There’s a systemic brain drain that’s happening all across the United States of America.

Cisco Aguilar ran unopposed for the Democratic nomination for Nevada secretary of state and will face Jim Marchant, a former state lawmaker, in November. Aguilar is an attorney who has worked for former Democratic U.S. Sen. Harry Reid and served on the Nevada Athletic Commission.

His first foray into electoral politics has not been an easy one. Aguilar said he lays awake at night worrying about the future of Nevada’s elections, given how much is at stake if he were to lose.

Marchant, like Finchem, has ties to QAnon and continues to claim that Biden did not legitimately win the 2020 election. He also said he would not have certified the election had he been secretary of state at the time.

Marchant has said that if elected, he would get rid of electronic voting machines, vote by mail, and early voting, and would replace electronic vote tabulators with hand counting of paper ballots.

“What he’s doing is irresponsible and dangerous,” Aguilar said. “He’s not a serious leader but the threat he represents is extremely serious.”

“We are a 24/7 economy,” he said. “When you ask somebody to try to limit their opportunity to vote to a single Tuesday in November between 7 a.m. and 7 p.m., that’s a working shift for many people.”

Aguilar’s campaign has seen an influx in money from both Nevadans and people outside the state concerned about what could happen if Nevada, likely to be a battleground in 2024, has an elections director who believes Trump’s “big lie” he said.

Despite having no primary challengers, Aguilar raised more than $450,000 during the second quarter of this year and reported having significantly more cash available than Marchant.

“People understand the severity of this campaign,” he said. “We have to make sure our elections are secure because not only could we hurt Nevada, we could potentially impact the entire country.”

“That’s what keeps me up at night,” he added. “We cannot allow somebody to put their finger on the scale for the benefit of him and some other individual at the cost of every citizen in the country.”