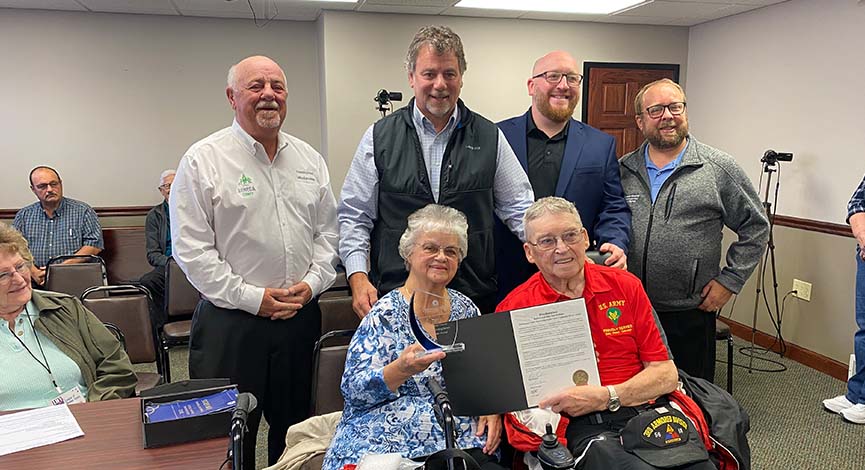 Tiffin, Ohio — The Seneca County Commissioners presented a proclamation to a local couple after they received a prestigious award earlier this month.

Robert and Rita Mae Kelbley were given the 2022 Senior Citizen Outstanding Community Service Award by the Ohio District 5 Area Agency on Aging this September.

The two were in attendance for Thursday morning’s board session to receive a proclamation from the commissioners recognizing this honor.

Robert is a US Army veteran and former fire chief and long-time firefighter for New Riegel Volunteer Fire Department. Both Robert and Rita Mae have dedicated their lives to service through various community organizations, including working as precinct election officials.

Each of the commissioners expressed gratitude to the Kelbleys.

Seneca County Commission on Aging Executive Director Bryan Glover also joined the meeting to celebrate the Kelbleys. Glover said he is truly proud to be from Seneca County.

“What really makes Seneca County great? It’s the people,” he said. “It’s people like the Kelbleys.” Robert and Rita Mae thanked the commissioners for the recognition and the area agency on aging for selecting them for the award.

“We were really proud of that,” Rita Mae said of being chosen.

In other action, the commissioners allocated $25,000 for the creation of a façade enhancement program to reinvest tax funding back into the local community.

Commissioner Tyler Shuff proposed the program during a board session last month.

Seneca County is partnering with Seneca Regional Planning Commission to administer the program to provide grant money to assist with the revitalization of exterior facades across Seneca County. A committee, which includes representation from all across the county, is to be formed to review and rule on applications.

The program is to be similar to Tiffin’s downtown facade enhancement program but will cover areas of the county not currently covered by an existing program.

“If this is a fraction as successful as the city’s downtown program, that would be great news,” he said, adding that the funding has served as a multiplier and led to major improvements.

Learn more about the program by clicking here.

Also, Commissioner Anthony Paradiso said that because $50,000 in grant funding was received for the demolition of the former Youth Center building, that money has been freed up to help with repairing the roof at the Seneca County Justice Center Annex.

The project includes a silicon roof sealant product that extends the warranty of the roof for 10 years.