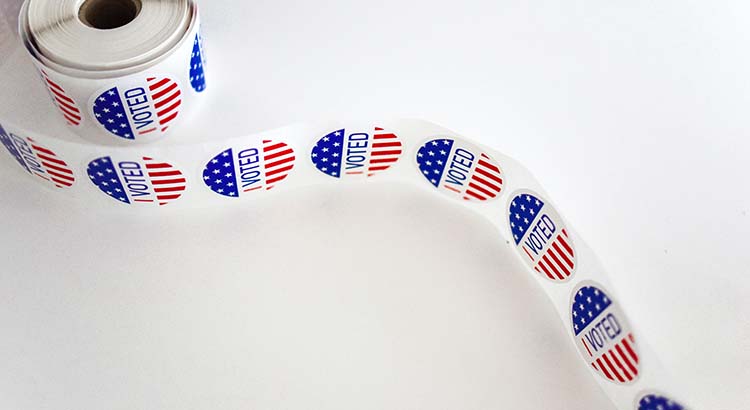 With the 2022 midterms little more than two months away, Republicans and their allies have blitzed the nation’s courts with election-related lawsuits, with more than half the legal actions attacking mail-in balloting.

Republican-affiliated groups filed 41 lawsuits through Sept. 16, compared to seven last year, and 13 by the same point in 2020, according to a new report by Democracy Docket, a group spearheaded by Democratic elections attorney Marc Elias.

The number of lawsuits filed by Democrats and their allies has remained relatively constant, with 35 actions filed so far this year, and 52 in 2021, the analysis showed. 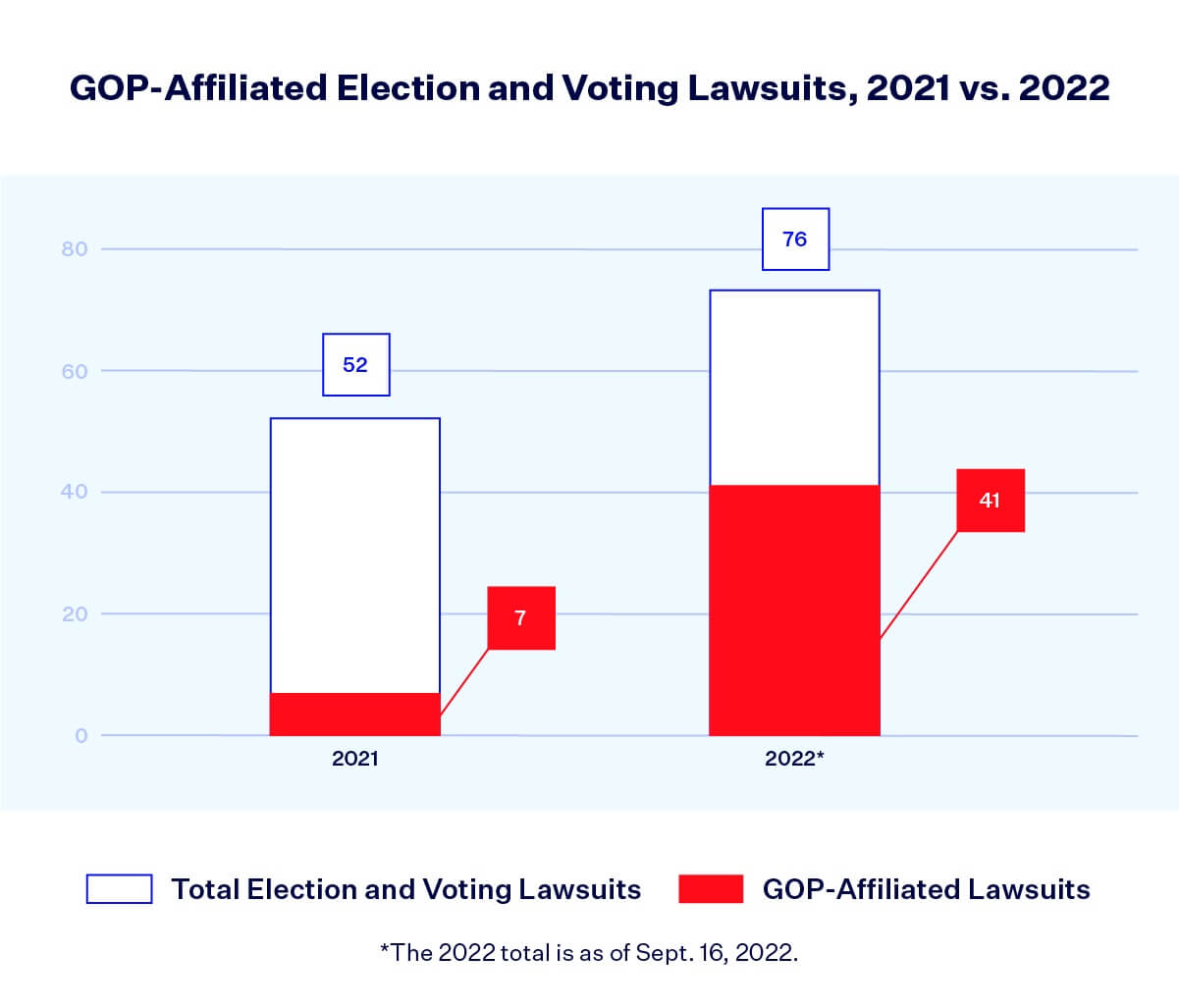 While Republicans and their allies proactively filed lawsuits in just seven instances last year, they were far from idle. Eighteen states enacted restrictive voting laws in 2021, sparking immediate litigation from civil and voting rights organizations, the Democratic Party, and the U.S. Dept. of Justice. National and state Republican organizations filed motions to intervene in nearly every case, the analysis showed. 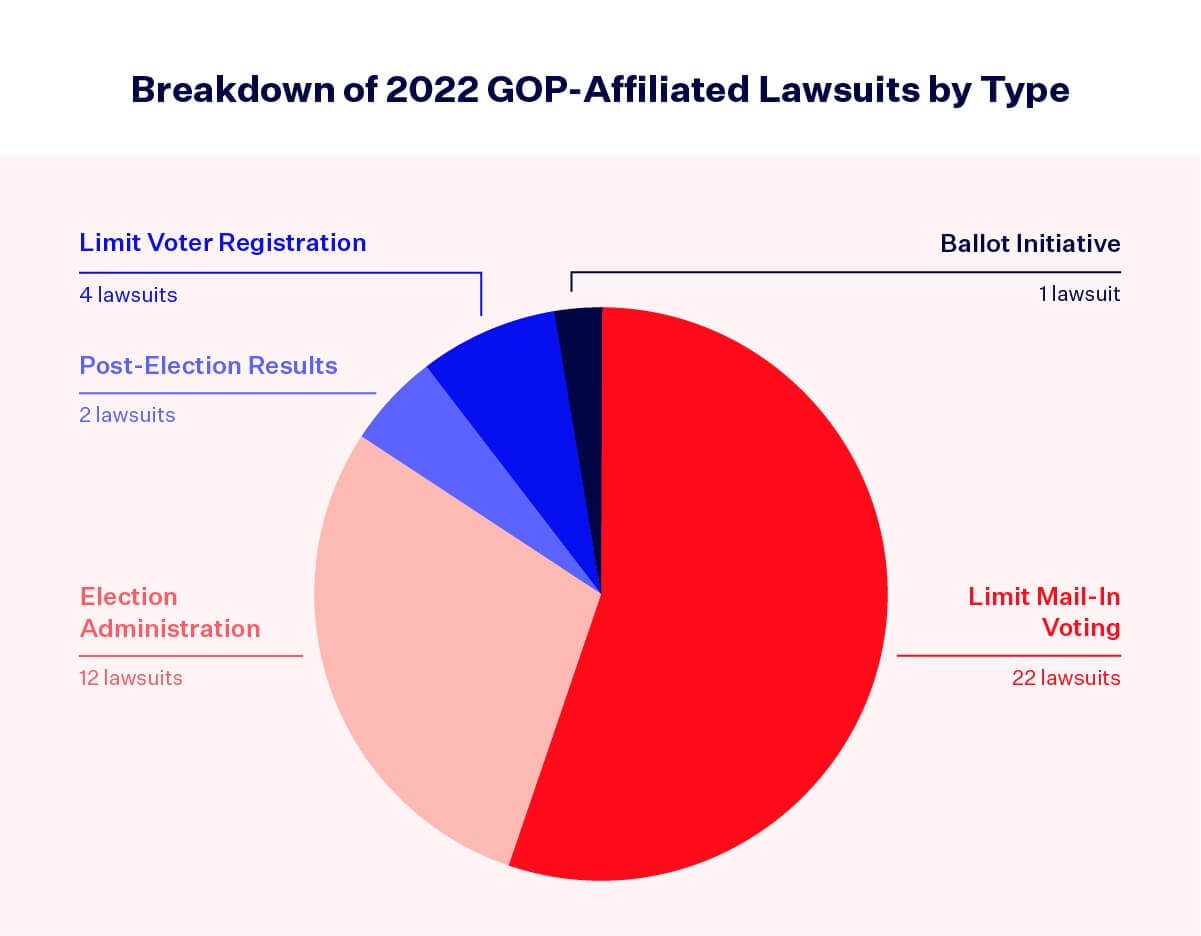 Through Sept. 16, Democracy Docket’s analysts said they’d tracked 76 voting and election-related lawsuits. Of those cases more than half (41) were filed by Republicans and their allies, a “486 percent increase in new lawsuits by GOP-affiliated groups from 2021 to 2022,” the report’s authors wrote.

Half of the lawsuits (22) filed this year include challenges to mail-in voting, which is legal in Pennsylvania and has faced repeated legal assaults by the GOP and its allies.

The legal actions filed this year include cases that challenge absentee ballot deadlines, the use of drop boxes, signature matching rules, and ballot curing procedures, which allow voters to fix errors with their ballots, according to the report.

“An [Associated Press] survey recently confirmed that even in 2020, an election year with a significant increase in drop box use due to the COVID-19 pandemic, there were no widespread problems with drop boxes,” the report’s authors wrote.

According to the report, a dozen Republican-led lawsuits filed this year have focused on the logistical aspects of running an election. That includes  conspiracy-based challenges against voting machines, the analysis found.

“Among the other lawsuits filed this year, one successfully blocked a pro-voting ballot initiative from appearing on Arizona’s ballot this fall, two dealt with post-election results and four seek to limit voter registration opportunities,” the report’s authors wrote. 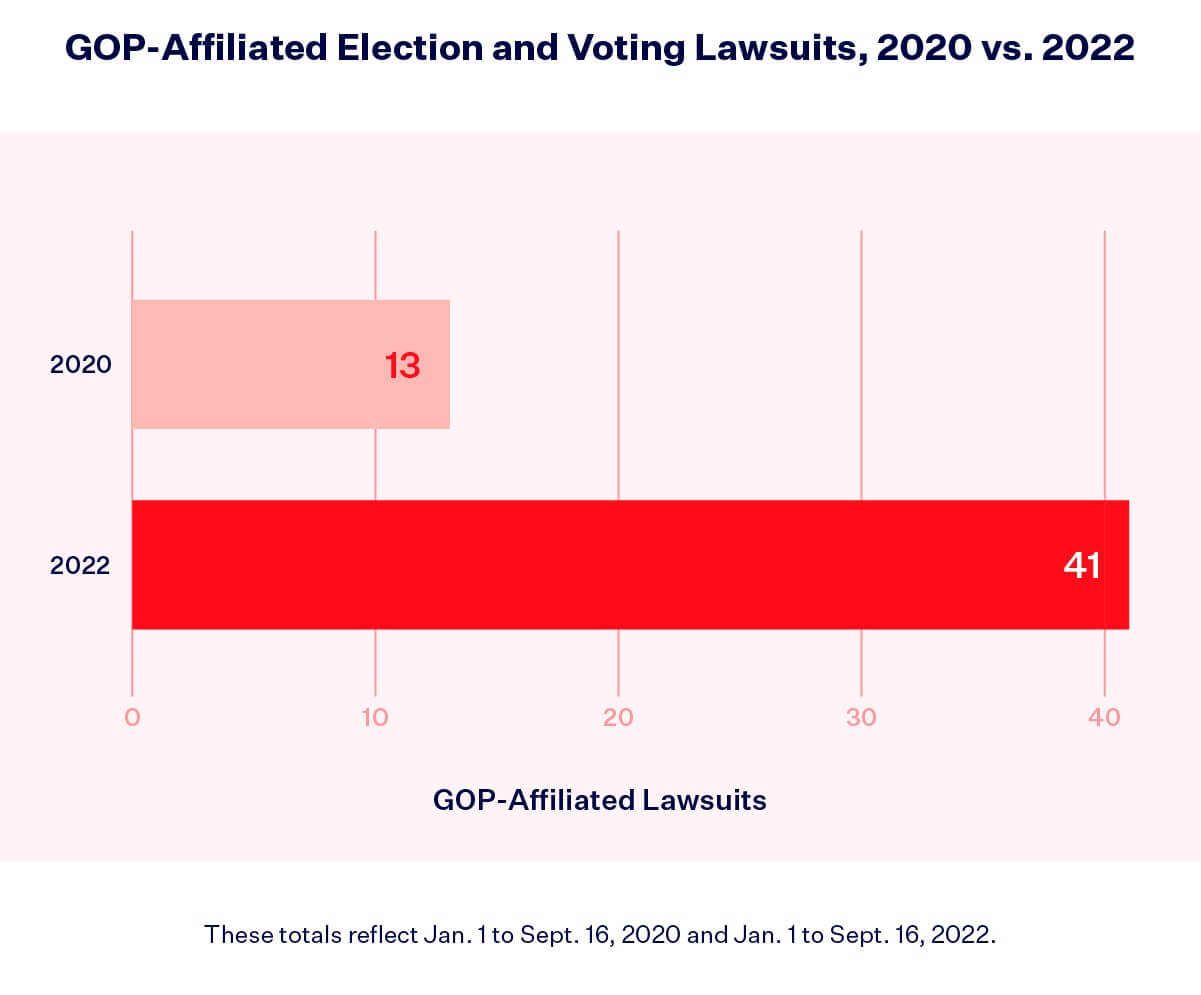 As the midterms near, Republicans have shifted their tactics, moving away from attacking from who can vote to which votes count, the analysis indicated.

On Sept. 1, for instance, the Republican National Committee filed a lawsuit challenging “the authority of Pennsylvania county officials to notify voters of technical mistakes with their mail-in ballots and allow voters to fix simple errors to ensure their ballots are counted, a routine process known as ballot curing,” according to the report.

Based on the litigation so far, analysts say they expect to see an “even greater” number of legal actions filed in the run-up to Election Day on Nov. 8.

“Even though the first few months of the COVID-19 pandemic created a unique legal environment where a number of voting laws were litigated prior to the general election, 2022 GOP-filed litigation is significantly outpacing 2020 already,” the report’s authors wrote.

A 3-decade veteran of the news business, John L. Micek is the Pennsylvania Capital-Star’s Editor-in-Chief. An award-winning political reporter, Micek’s career has taken him from small town meetings and Chicago City Hall to Congress and the Pennsylvania Capitol. His weekly column on U.S. politics is syndicated to 800 newspapers nationwide by Cagle Syndicate. He also contributes commentary and analysis to broadcast outlets in the U.S., Canada and the U.K. Micek’s first novel, “Ordinary Angels,” was released in 2019 by Sunbury Press.

This column was republished from the Pennsylvania Capital Star under a Creative Commons license.