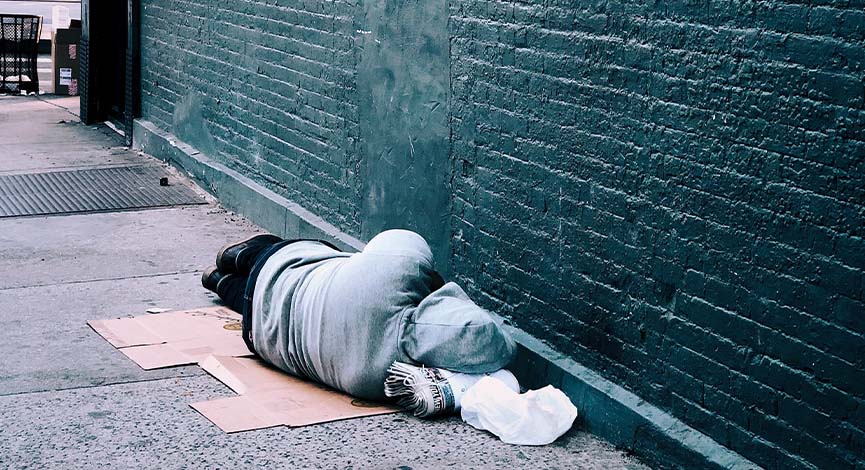 The Department of Housing and Urban Development has opened up millions of dollars in funding for groups serving unhoused people in rural areas — an unprecedented move by the agency, say housing advocates.

People living in cars, parks, and on the street at night, which the agency labels unsheltered homelessness, has increased across the nation, particularly in urban areas on the West Coast, but rural areas across the country are also being affected, a department spokesperson said.

Continuums of Care, the planning bodies that address homelessness within specific regions, have until Oct. 20 to apply for a portion of $54.5 million targeted at rural homelessness. HUD could not provide an estimate for how many organizations  would benefit from this funding but said that 127 of them are eligible to apply.

Steve Berg, vice president for programs and policy at the National Alliance to End Homelessness, said the housing challenges are different in rural areas. Berg said the issue in rural areas is not always a lack of housing as it is in urban areas but a lack of safe housing.

“In rural areas, there’s housing and a lot of it is vacant or it’s run down. It’s not kept up well, so it’s substandard housing. If that goes on for too long, then people just can’t live there safely.”

Berg added that the systems in place for addressing homelessness in rural areas also operate differently from urban areas.

“There aren’t homeless programs in a lot of rural areas. A county that’s mostly rural might get a little bit of federal homelessness money, but it’s not enough to really run a program or people’s salaries,” he said. “So in a big city, you’ve got a whole sort of system of homeless programs that are dealing with different aspects of the problem and are overseen usually by a centralized agency that makes decisions about how the funding will be doled out and who will go to work. None of that really exists in a lot of rural areas.”

Adrienne Bush, executive director for the Homeless and Housing Coalition of Kentucky, said that understanding how many unhoused people are in rural areas is challenging because of “service deserts” where there aren’t shelters or housing programs available to count the number of unhoused people.

Bush said that there is a need for more resources for outreach as well, which looks different in rural areas. For example, it could require going to a state park and walking up and down river beds rather than going to an encampment under an overpass.

In 2020, the states with the highest percentages of unsheltered unhoused people overall were Nevada, Oregon, California, Hawaii and Arkansas. Maine, New York, Nebraska, Massachusetts, and North Dakota had the lowest rates, according to the 2021 HUD report. HUD also has $267.5 million in funds available to address the unsheltered homeless population in non-rural areas. The report also found that largely rural Continuums of Care that had the highest percentages of unsheltered unhoused people were in West Tennessee, including the city of Jackson; Lake County, California; and seven counties in Florida: Hamilton, Columbia, Suwanee, Lafayette, Hardee, Highlands and Hendry.

The HUD funding will begin to address the challenges advocates describe.

Brenda Gray, executive director of Heartland Coalition for the Homeless in Florida, whose coverage area includes Hendry, Hardee and Highlands counties, said that some of the challenges to preventing homelessness in the area include a lack of affordable housing.

Gray said she hopes that at least a few of the six counties the Heartland Coalition serves will be selected for projects. One possible project she’s looked at would be a pilot project in Hendry County for 12 or 13 tiny houses on a third of an acre of land.

“We’re a small Continuum of Care and what we really need funds for is a housing specialist. My clients that we serve right now — we try to assist them as much as we can in locating housing,” Gray said. “But without a housing locator or a housing specialist, there’s not too much we can do. So what we ask them to do is to find housing and then we will help you get into that place financially, providing you will qualify. So housing specialists and outreach is the most important in my point of view. Because we’ve got a case manager trying to do everything.”

Bush said that she sees the HUD funding as an opportunity for areas that can’t supplement federal dollars with money from their local general fund and tax base like Louisville and Lexington can.

“Some of these smaller communities, say Hopkinsville, Kentucky, don’t have that luxury and so whatever money for homeless services they have, it’s going to be coming from the federal government and dependent on whether there is a local organization that has the capacity to apply for and deliver high quality services with federal funds,” she said. “The state is not supplementing anything from its general fund towards homeless assistance and that is unfortunately true for a lot of southern states.”

She added that one of the things she likes about the funding opportunity is that it incentivizes projects that have partnerships with housing providers.

“The idea here is to increase the [housing] stock and streamline the process from people experiencing homelessness to actually get into the housing,” Bush said.

HUD says that one of its policy priorities for the funding is a “housing first” approach. The department says that Continuums of Care should “engage landlords and property owners to identify an inventory of housing available for rapid rehousing and permanent supportive housing participants, remove barriers to entry, and adopt service delivery methods that respond to the preferences and needs of the individual or family presenting for assistance.” It also requires that Continuums of Care describe their current strategy for recruiting landlords and how they would use data to change their recruitment strategy.

She said that the HUD funding provides for services like short-term emergency stays in hotels, emergency food and clothing, prevention of homelessness for those who are behind on paying rent, and things that will help build agencies and organizations’ capacity, such as employee education, that aren’t usually available to Continuums of Care.

“They have programs that are well designed to get good results, but they’re just never funded enough to really go to scale.”

For upcoming federal appropriations, the National Alliance to End Homelessness is advocating for $3.6 billion in funding for HUD’s Homeless Assistance Grants and $32.1 billion for the Tenant Based Rental Assistance account.