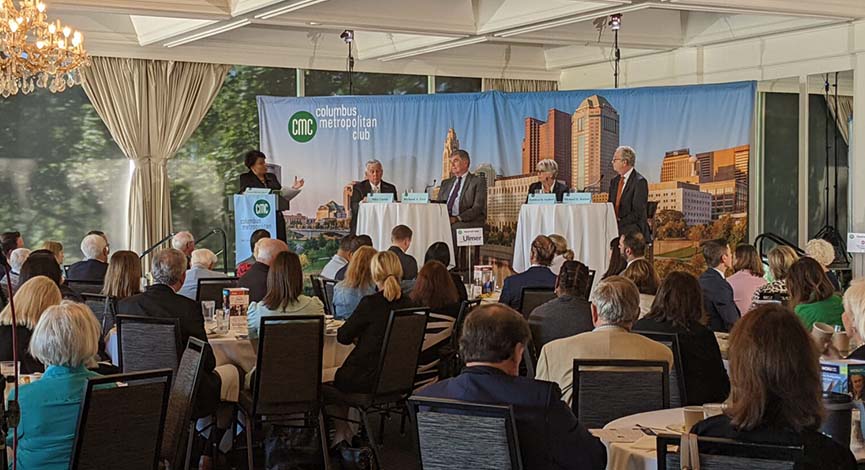 In a Columbus Metropolitan Club forum last Wednesday, Yvette McGee Brown moderated a panel discussion with experts about public attacks on the court system and how to maintain its integrity. The group also gave their insight on social media’s role in public affairs in light of the upcoming Nov. 8 General Election. Panelists agreed that to improve civic education, one must look to the past.

“There are different ways we can respond to judicial decisions. If you have a legitimate principle disagreement with a decision, that is one thing. If you have a personal attack on the integrity of the judge who decides the decision or the court itself, that is an entirely different entity,” panelist Kathleen M. Trafford said.

Trafford is a fellow with the American College of Trial Lawyers and an attorney with Porter Wright.

“You have to blame social media as part of the problem because it is instantaneous. It spreads so wide and so quickly that there is no time to formulate any thoughtful response,” Trafford said.

Trafford also referenced a Gallup report released in June. According to the results, only 25% of Americans who filled out the survey expressed a “great deal” or “quite a lot of confidence, in the U.S. Supreme Court. Fellow panelists and judges at the Franklin County Court of Common Pleas believed that it goes deeper than social media perception. Many entertainment outlets portray judges in theatrical light to keep the viewer’s attention.

“It’s not just an age-old criticism. It is now a magnified criticism because of social media,” Franklin County Court of Common Pleas Judge Richard A. Frye said. “It is also magnified by the absence of as much civics education for our young people as we used to get back when I was growing up in the ‘50s and ‘60s.”

Some civic education could consist of Ohio’s history with judicial elections. Ohioans have been electing judges to the Ohio Supreme Court since 1851. One major change since then was the Non-Partisan Judiciary Act of 1911.

However, Senate Bill 80, passed in July 2021, repealed the act, and Ohio Supreme Court and Court of Appeals candidates will run with their party labels on the ballot.

According to Michael Curtin, former editor and associate publisher at The Columbus Dispatch, this is a sign of one of the ugliest elections ever.

The proposed solution was to encourage more people to seek out more reliable sources, and attend other public events that explain how the courts work. Organizations that were named proponents of this include the Columbus Bar Association, The Vets Law Group, and the American College of Trial Lawyers.

“There’s a whole universe of solutions, but they all require people to get involved,” Curtin said.