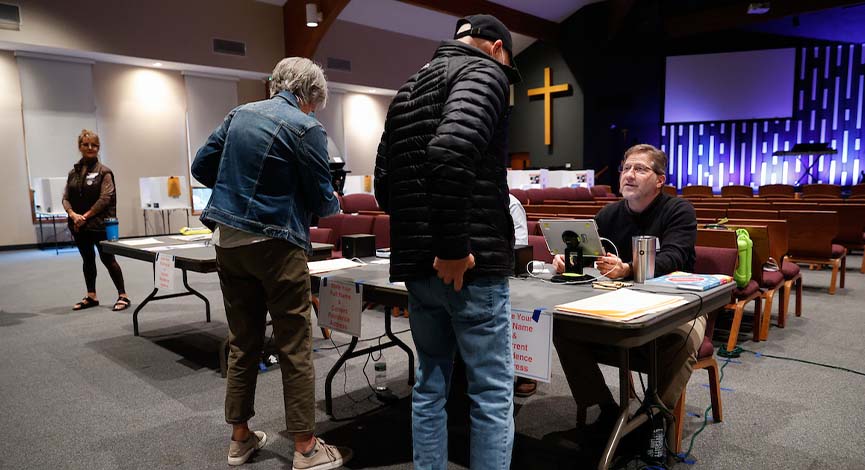 Polls closed Tuesday on a displaced and largely neglected primary election in Ohio. Unofficial turnout figures were just 7.93% according to Secretary of State Frank LaRose.

But even if turnout was anemic, the results still count, and those results offer a couple of firsts worth highlighting.

In Northeast Columbus-area Districts 3 and 9, voters are on the verge of electing the state’s first Somali officeholders. The city’s Somali community is one of the largest in the country — second only to Minneapolis according to the Somali Community Association of Ohio.

In the 3rd district, attorney Ismail Mohammed emerged from a five-way Democratic race and is clinging to a narrow lead. In the 9th district, meanwhile, nonprofit program manager Munira Abdullahi won the Democratic nomination handily.

Both are running for seats that lean far to the left, and in Abdullahi’s case, a Republican won’t even appear on November’s ballot.

Tuesday saw two incumbents lose to primary challengers. In Licking County, Rep. Mark Fraizer, R-Newark, was defeated by Thad Claggett, the president of a Newark construction firm. This was actually the second time the two have faced off.

In 2020, Fraizer was running to defend his seat after being appointed by the Republican caucus to fill out an unexpired term. His selection came while Larry Householder held the speaker’s gavel, and during that 2020 primary, Householder money flooded into the race attacking Claggett. Fraizer eked out a victory and insisted he would’ve prevailed even without Householder’s influence.

In a Facebook post late Tuesday, Fraizer thanked his family and supporters and said “although I do not know what is next, I know I will continue to strive to serve others with dignity, respect, and compassion.”

Rep. Shawn Stevens, R-Sunbury, was shown the door Tuesday as well. Like Fraizer, Stevens assumed office by appointment, but he was sworn in less than five months ago. He lost his reelection bid to Beth Lear, who describes herself as a “BATTLE-TESTED CONSERVATIVE” on her website.

The power of incumbency

Meanwhile, a few notable races saw incumbent lawmakers fend of challengers. Rep. Susan Manchester, R-Waynesfield, who is running to represent Lima-area District 78 saw one of the highest turnout races in the state. She was able to hold off J.J. Sreenan, but it was one of the narrower margins among incumbents.

Rep. Thomas Hall, R-Madison Twp., held off challenger Matt King by a similar margin despite a funding disadvantage. On Twitter, he shared a screenshot of the results with the message “onto November.”

All glory to God! Thankful for my family, friends, and AMAZING team on this win. THANK YOU to so many of you for voting and getting people out to vote yesterday! Onto November 🇺🇸 pic.twitter.com/hiceFj9dGp

Across the aisle, two Democratic incumbents ran against each other in the suburban Cleveland-area District 16. Rep. Bride Rose Sweeney, D-Cleveland, was able to overcome Rep. Monique Smith, D-Fairview Park, in that race.

Despite expressing anger at party leaders lending support to Sweeney’s bid, Smith was gracious after the results came in, committing to supporting Sweeney in November.

“We WILL keep our district blue,” she wrote on Twitter.

In the Senate, Republican incumbent Nathan Manning of North Ridgeville easily fended off a challenge from state school board member Kirsten Hill. At the same time Reps. Kent Smith, D-Euclid, and Shane Wilkin, R-Lynchburg, successfully earned their party’s nomination in their Senate bids.

It can be dangerous to read too much into primary election results — even more so when turnout is in the single digits. Still, there are some results worth flagging.

After losing the Secretary of State race in 2018, Democrat Kathleen Clyde is making a comeback bid for her old House seat, District 72. Rep. Gail Pavliga, R-Portage County, currently represents the district, and although it’s a toss-up, it leans ever so slightly to the right. Neither Clyde nor Pavliga faced a primary opponent, but Clyde got about 500 more votes on Tuesday — a roughly 11-point lead.

Ohio’s 89th district in the Sandusky area is far more conservative, but Democrat Jim Obergefell was able to turn out a handful more voters than Rep. D.J. Swearingen, R-Huron. But the lead plaintiff in the case that established marriage equality in the country will have his work cut out for him to repeat that in November. Swearingen was one of the prime movers behind a constitutional amendment that appears to be the centerpiece of “tough on crime” messaging Republicans are teeing up for the general election.

Across the aisle, Republican Beth Bigham outpaced Rep. Casey Weinstein, D-Hudson by about 500 votes as well. That translates to a roughly 8-point edge in a district that favors Democrats by about three points. And in one of the most closely divided districts in Ohio, Republican newcomer Ronald Beach was able to turn out slightly more voters than Rep. Richard Brown, D-Canal Winchester.