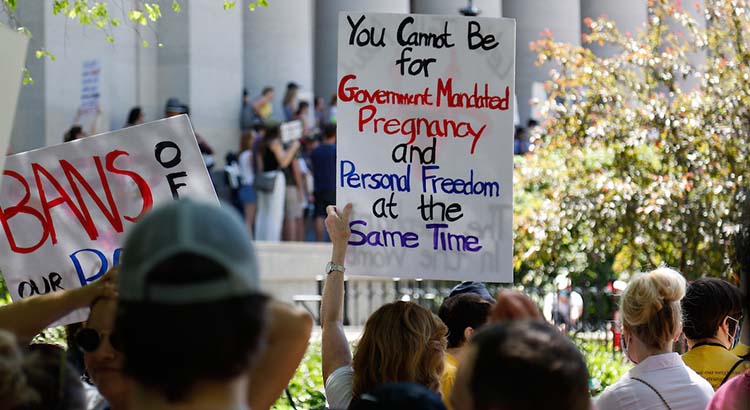 COLUMBUS, OH — MAY 14, 2022: Hundreds gather at a rally to support abortion rights less than two weeks after a leaked Supreme Court draft opinion showed a likely reversal of Roe v. Wade, May 14, 2022, at the Ohio Statehouse, Columbus, Ohio. (Photo by Graham Stokes for the Ohio Capital Journal.)
ShareTweet

Hell hath no fury like a woman scorned, goes the famously true idiom. Ohio candidates running for office on an anti-women agenda in 2022 would be well to remember the phrase. Women will not go quietly into a repressive post-Roe world.

Campaigners who think they can hide from their rhetoric or records and avoid the fury of newly subjugated Ohioans — who make up over half of the voting-eligible population in the state — have a lot to learn about women.

Anger over the Dobbs decision denying women the right to abortion isn’t going away. Whatever your opinion about the issue, the longstanding constitutional protection gave women agency over their lives. It gave them options and the freedom to act on those options. Abortion rights gave women the same bodily autonomy afforded men.

That’s gone. A right-wing patriarchy on the U.S. Supreme Court and wielding predominant political power in Ohio took it away to put women in their place.

Two generations of women were free to decide the most intimate aspects of their lives without political intrusion until June 24, 2022. The ramifications of losing that fundamental freedom of self-determination hit home for many in deeply personal ways. Disbelief over banned access to abortion — that for 50 years empowered women to take and keep control of their lives — has given way to indignation.

How dare men in robes and leading state government in Ohio reduce women to second-class citizens subject to restricted liberties? How dare they refuse sovereignty to women over something so central to them, to their dignity? How dare they mandate forced birth for Ohio women, girls and 10-year-old rape victims?

How dare they impose their minority beliefs about abortion on a majority who believes it should remain legal and accessible?

Dobbs changed the dynamics of an otherwise low energy, low voter turnout election year in Ohio. Abortion is on the ballot. Across the political spectrum in Ohio cities, suburbs, villages and townships, women are livid about losing their freedom to choose their own medical care and laser-focused on who gets elected in the upcoming election.

Suburban women are connecting with urban and rural women about the danger of extremists eliminating further freedoms if they win in November. Extremism overturned Roe. It enacted a near total abortion ban in Ohio. It stands ready to pass more radical measures in the Statehouse undermining women’s rights after the election.

No freedom is safe.

The midterm election has become a referendum on endangered rights — from choice to contraception and marriage equality — and who can be trusted to preserve them. Women are mobilizing like only women on a mission can. Ohio candidates who endorsed or enacted extreme restrictions on abortion — and joined a chorus of largely male partisans who applauded the Dobbs ruling against women — can hardly be trusted to protect fundamental personal freedoms.

Gov. Mike DeWine signed some of the most restrictive abortion bills in the nation into law. A near-total abortion ban in Ohio went into effect the same day Dobbs did. He pledged to go “as far as we can” to cancel abortion rights entirely if reelected. That posturing was sidelined after the cruel impact of his abortion ban on a 10-year-old rape victim rocked the world.

DeWine doesn’t want to talk about it. He’s evasive about how far he’ll go to make things worse for rape and incest victims in his second term. He appears irked when questioned about his record of ripping away reproductive rights from Ohio women.

He suggests people are overreacting to one gender being dehumanized with regulated destinies. The blowback by incensed women “has gone off the rails.” DeWine plans to “let the debate play out a bit” and change topics — as if women can’t hold two thoughts in their heads at once.

Urbana Republican Jim Jordan slammed the landmark Obergefell decision by the Supreme Court legalizing marriage equality and inferred that a bill codifying that right was distraction from more important problems like inflation. Republican carpetbagger J.D. Vance, the Ohio GOP nominee trying to buy an open U.S. Senate seat, dittoed Jordan’s opposition and declared he would have been a no vote to protect the rights to same-sex and interracial marriages if he were in office.

Good to know. The lack of empathy or regard for voters — extremists are ostensibly courting to win power — is profound. But they can’t hide from half the electorate in Ohio scorned and furious and motivated. They will learn a lot about women before this campaign over denied rights is called.