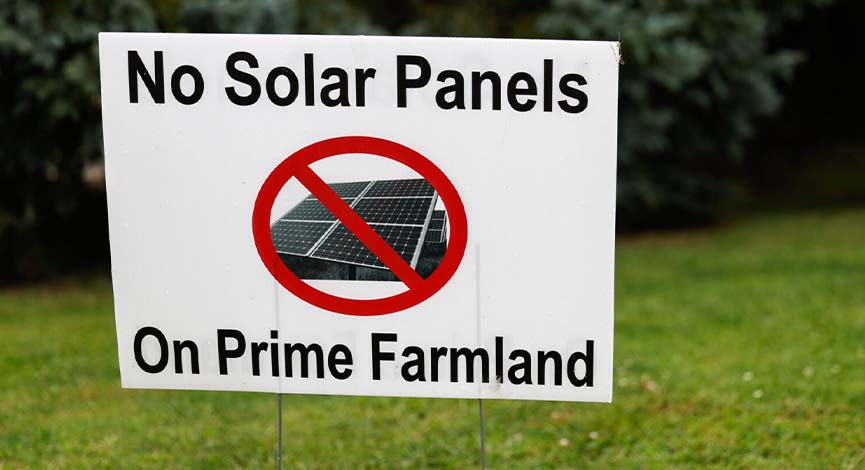 FAIRFIELD COUNTY, OH — AUGUST 29: An anti-solar power sign outside a home, one of many in a rural area east of Lancaster, Ohio, August 29, 2022, in Fairfield County, Ohio. (Photo by Graham Stokes for the Ohio Capital Journal)
ShareTweet

Solar energy developers are facing peril after state officials recommended against granting them a permit to build a solar farm in Greene County capable of powering an estimated 34,000 homes per year.

Opposition from local governments, primarily concerned about the rural aesthetics of the area, trump the Kingwood Solar’s signed leases with landowners, the payroll and tax benefits for locals, and clean electricity for the grid, per the Ohio Power Siting Board’s staff conclusions.

The OPSB’s voting members aren’t obligated to heed the staff recommendation, though they typically do. There’s no firm timeline for a decision.

Board staffers originally drafted their report last year recommending a green light for the 175-megawatt application from Kingwood Solar, according to testimony from an adjudicatory hearing. But on Oct. 28, 2021, one day before its publication, OPSB executive director Theresa White directed an employee to call local townships to determine their position on the project.

After the call that same day, the all-Republican Greene County Commission voted to pass a resolution declaring the solar farm to be “incompatible with the general health, safety and welfare” of residents. Kingwood officials had been engaged with the commission but weren’t told in advance of the hearing and didn’t get to come in and make their case. That resolution ultimately flipped OPSB staff’s recommendation from yes to no.

Kingwood officials said the practice of feeling out the locals makes sense, but the timing is baffling. Why wait until one day before a report is due to do so? And why weren’t the developers told of the vote?

“This certainly seems like a coordinated effort on the OPSB’s part to have a basis to deny the permit,” said Juan Suarez, Kingwood’s chief development officer, in an interview.

OPSB lawyers acknowledged the phone call to the county and said in legal filings that it’s “proper and appropriate for the Board to consider local opposition” in its decision.

State law requires the OPSB to consider eight factors in the applications. Kingwood met seven of them, according to OPSB staff. But given the commission vote, staff said the project doesn’t “serve the public interest, convenience, and necessity.”

The Kingwood story shows how despite a boom in solar generation in Ohio, resistance from state and local governments and NIMBY-fervor continue to gum up projects and possibly chill future investments.

It also underscores locals’ ability to thwart renewable projects, an ability that doesn’t apply for fossil fuels. In 2015, the Ohio Supreme Court overturned Munroe Falls’ ordinances seeking to ban fracking, determining the state has “sole and exclusive authority” as to the regulation of oil and gas wells.

Rejection of the Kingwood permit would come at the cost of $1.575 million annually to the county in taxes. Kingwood officials estimated they’d hire 225 full-time employees over 16 months to build the project, creating $20 million in payroll. From there, it would employ four full time employees year-round that earn an average of about $111,000 annually, according to its application. That’s to say nothing of indirect economic benefits.

The project sits on 1,5000 acres of rural land in townships of Miami, Xenia, and Cedarville, including about half a mile from Gov. Mike DeWine’s own backyard.

Kingwood is a project of Vesper Energy, a Texas-based renewable developer with projects around the country, including the 80-megawatt Nestlewood Solar project in Brown and Clermont counties. (That project had been delayed by the OPSB’s former chairman, who has since been accused of taking a $4.3 million bribe from FirstEnergy Corp.)

Both Kingwood and the OPSB agree that state law and the courts provide little guidance as to what’s in the “public interest.” OPSB staff interpreted the phrase narrowly — the local government opposition alone meets the standard. The report section makes no note of the landowners who signed deals with Kingwood or the global need to shift away from fossil fuels to renewable energy sources.

Planning for Kingwood started about five years ago, which exempts it from recently passed state legislation that gives county commissions veto power over utility-scale wind and solar projects. However, the OPSB said the legislation has “emboldened” locals to oppose the grandfathered-in projects.

Just before Greene County passed its resolution, five residents voiced their support for the project and opposition to the commission’s action. Union electrical workers and operating engineers emphasized the construction jobs the project promised. Others, including some who leased land to Kingwood, emphasized the rights of property owners to do as they wish with their land, and the need to pivot to renewables.

All three county commissioners voted for the resolution, though they all noted they’re not “against solar.” Several mentioned the project is against the county use plan — which as they noted, only passed after the Kingwood developers applied for a permit. They said the solar panels will ruin the natural aesthetic.

“The Commissioners are not against solar installations altogether, they just want to make sure they are in the right places,” he said. “In this case, they do not believe it would be properly sited. The area under consideration is well populated and growing. It is near (and on the way to and from) several tourist attractions and natural scenic areas. They felt it would be a detriment to the local tourist economy and would negatively impact the quality of life of nearby residents.”

Some 17 residents entered lease agreements with Kingwood, and several residents have publicly expressed support for the project. However, considerable local opposition surfaced at community meetings. A November 2021 public hearing attracted 68 speakers over six hours, according to The Dayton Daily News, with the vast majority in opposition. Conversely, Kingwood submitted to the OPSB letters supporting the project from 76 union workers in support of the project.

Kingwood also commissioned a recent poll from a Virginia-based firm that consults for Republican candidates and corporate clients. Pollsters interviewed 350 registered voters in Greene County. Of them, most (60%) hadn’t heard anything about the Kingwood project. The respondents indicated support for Kingwood on about a 2-1 margin when the question was framed around the project’s tax benefits to the county.

Kingwood officials have asked the OPSB to ignore their staffers’ opinion and grant the permit. In an interview, they said they expect an unfavorable ruling that they plan to appeal to the Ohio Supreme Court.

“I have not taken a specific position on that,” he said. “It is in my backyard. I’m careful not to take a position.”

Besides the local government opposition, a few outside groups have joined the legal fight against Kingwood. Among them is a group called “Citizens for Green Acres,” which says it represents 47 people who live adjacent to the project. In legal filings, the citizens listened among their concerns: spoiled views, construction noise, potential threats to birds and wildlife, a failure to protect groundwater supplies, and a failure to protect the panels against wind, hail, lighting and fire. (OPSB staff disagreed on these points).

Citizens for Green Acres is represented by an attorney named Jack Van Kley, who represents citizens challenging at least 12 wind and solar projects around Ohio. He did not respond to an inquiry.

Kingwood staff emphasized that they’ve offered concessions to locals like payments to those adjacent to the property, expanded buffer zones between property lines and solar panels, and more robust vegetative screening.

The planet continues to warm, and a U.N.-backed international panel of scientists recently issued a major report on the worsening outlook of global warming and the pan-governmental need to shift from fossil fuels to renewable energy sources.

At a certain point, Suarez said, governments have to see a bigger picture than neighbors concerned about their unobstructed views.

“It needs to be interpreted broader than just the local community. You need to take the county and state into consideration,” he said.