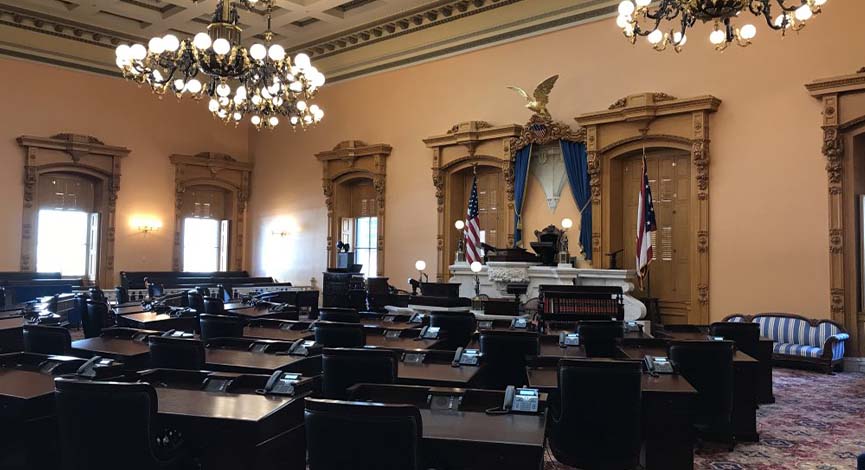 An obscure legal theory is in the sights of the U.S. Supreme Court, and that theory may create shockwaves, changing the power of the Ohio Supreme Court and the state legislature.

The independent state legislature doctrine is an old theory with its genesis in the U.S. Constitution, specifically the clauses that give the state legislatures the power to establish the “time, place and manner” of congressional elections, and in the establishment of presidential electors.

The theory can be interpreted to claim state legislatures have more power than state supreme courts, and even governors’ veto powers. This interpretation has been rejected by courts for several centuries, but there is a renewed push for it with Republicans now controlling the U.S. Supreme Court 6-3.

Debate has been widespread about how to interpret the power of the state legislature, giving rise to new use of the theory in events such as the 2020 election, and false claims that the election had been “stolen” from Donald Trump, including the isolation of ballots in Pennsylvania until a court could decide whether the ballots could be included in Pennsylvania’s official counts.

In Ohio, elements of the theory arose as the state’s General Assembly, and the Ohio Redistricting Commission made up of elected officials, spent the last year going back and forth with the state’s supreme court on whether or not redistricting maps were valid, and who had the power to say whether elections could be moved due to the chaos that ensued.

During their time as members of the state’s redistricting commission, House Speaker Bob Cupp and Senate President Matt Huffman argued that redistricting is a “legislative task because it requires legislative, not judicial, judgments” as they fought against a lawsuit asking the court to strike down congressional district plans because of concerns of undue partisanship.

Huffman also said the Ohio Supreme Court did not have jurisdiction over the congressional map and the commission stood “independent of any other branch of government in Ohio,” despite the state’s highest court explicitly claiming the power to approve or disapprove of redistricting plans.

The congressional map was eventually rejected by the court, and a second version of the map was struck down by the court on July 19. The General Assembly has yet to schedule a meeting to redraw the maps, despite being given 30 days by the court to do so. If the GA fails to do so, the ORC will be handed the job and another 30-day timeline.

The U.S. Supreme Court has heard arguments on the theory several times over the years, but this time seems to be different because of the court’s majority conservative makeup, which some argue could make them more friendly to the theory.

The court also specifically said it would consider Moore v. Harper, a case that explores the power of a state’s judicial branch to go against regulations for congressional elections, despite the fact that the state legislature has the authority to determine the “time, place and manner” of those elections.

“The main issue is whether it takes the state courts out of the mix,” said Steven Huefner, C. William O’Neill Professor in Law and Judicial Administration and Legislation Clinic Director at the Ohio State University Moritz College of Law.

“Then what we’ve seen is some bitter fighting over just what that state supreme court role is, and we’ve seen people talking about whether there ought to be some adjustments to the redistricting process to explain what the court’s role really is,” Huefner said.

Members of the redistricting commission even went so far as to say the Ohio Supreme Court did not have the authority to hold them in contempt for failing to pass a constitutional map in a court-ordered amount of time because the commission had fulfilled its “legislative duty.”

“The independent state legislature doctrine has the potential, if it were adopted to its full limit, of saying it would violate the U.S. Constitution to give the state courts any role,” Huefner said.

But, Huefner said, it’s “not at all clear to me” that the U.S. Supreme Court is ready to go that far, and the theory isn’t necessarily a definitive tome about the rights of the legislative branch. It stands more as another interpretation of how the power of the state legislature is defined.

“(The theory) isn’t really a unitary doctrine, it’s a set of documents that say what it could mean in terms of state legislature’s power,” Huefner said.

For that reason, the professor said it’s “not really a fair characterization” of the theory to say that it could lead to individual state’s overturning their state’s president election results.

Though state legislatures may have the power to establish the set-up of a federal election, federal law holds court over the process of counting electoral votes, and requires a state’s selection of its presidential electors to be “conclusive,” according to Huefner, therefore chosen in a process designed well before the election has even taken place.

“If a state somehow does something after that congressionally specified date, Congress doesn’t have to accept it,” Huefner said, citing the Electoral Count Act, codified in U.S. law.

Huefner’s colleague at OSU, Professor Ned Foley, expounded upon this fact in an Election Law Blog post, calling the Electoral Count Act “essential whatever the court decides in Moore v. Harper, and ECA reform can adequately handle the risk of any attempt by a state legislature to steal a presidential election.”

“A state legislature has no more power to manipulate the counting of ballots to achieve a dishonestly partisan outcome contrary to what an accurate count would show than does a state or local canvassing board,” Foley wrote.

The ECA has been under scrutiny since the 2020 election, and may see what many see as needed improvements to the act, which has been in effect since the 1880s, as bipartisan support surrounds a reform effort in Congress.