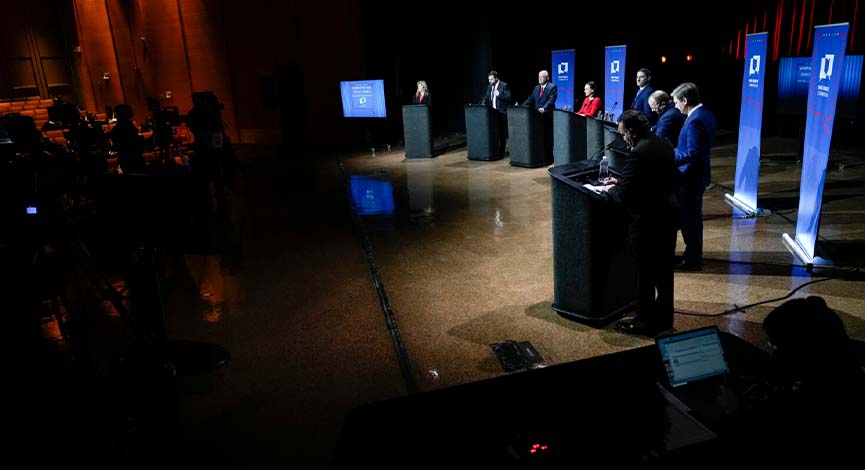 The Ohio Debate Commission announced its plans Monday for the U.S. Senate, governor, and chief justice of the state supreme court races. The Democrats in all three contests plan to attend. The Republicans haven’t signed on yet.

The commission’s schedule includes a gubernatorial debate Oct. 10 and a U.S. Senate debate Oct. 12. They plan to host the chief justice forum on one of those dates as well. They’ll hold all three events at the Akron-Summit County public library’s main auditorium.

The commission’s announcement describes intense interest and lengthy planning. Almost two dozen media outlets around the state want to carry the events. Organizers began reaching out to campaigns in mid-May — just weeks after the primary election.

“In an election cycle where voters have indicated how concerned they are about threats to democracy,” debate commission executive director Jill Zimon said, “candidates’ participation in high quality debates — and providing that content to as many Ohioans as possible — is more critical than ever.”

“Our record shows our capacity to reach millions of Ohio voters with this important content,” she continued.

In addition to providing a public service for voters, organizers will work with the University of Akron to provide educational programming for high schoolers and college students.

The announcement notes every candidate has previously participated in debates or forums hosted by the commission. But Republican opposition is familiar.

During this year’s GOP primary debate, some candidates bristled at moderator Karen Kasler fact checking their false statements. Josh Mandel and eventual nominee J.D. Vance both carved out time in their closing statements to complain about topics they didn’t discuss.

That hostility fits into a broader national pattern. This April the Republican National Committee voted unanimously to withdraw from the non-partisan Commission on Presidential Debates over perceived bias.

Gov. Mike DeWine, J.D. Vance and Justice Sharon Kennedy’s campaigns all failed to respond to requests for comment about whether they plan to participate come October. As for what happens if none of them show?

“We are always thinking about options,” Zimon said in an emailed statement.