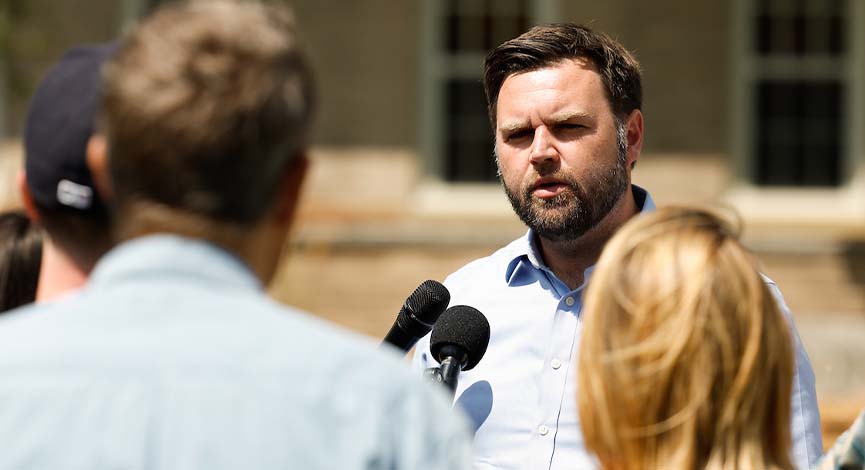 The average snake sheds its skin three to six times a year. The average politician sheds skin throughout the year — as soon as old layers become liabilities. J.D. Vance is in a class all his own. The Republican nominee angling to replace Rob Portman as U.S. Senator sports new epidermis so often snakeskin sightings on the campaign trail in Ohio have exploded.

The baby-faced bestseller grew a beard to morph from Silicon Valley elite to Midwestern mint when he moved from California to Ohio to run for the Senate seat. To compete with primary rivals jostling for a coveted (?) endorsement from the most corrupt president in American history, Vance did a 180-degree transition from Never-Trumper to Uber-Trumper.

He changed from center-right to full-on MAGA, embracing the far side of fanatical and everything the Dear Leader fabricated about a legitimate election he lost. Vance’s strategic conversion to the cult of personality paid off with a last-minute blessing from the loser. That affirmation (from an amoral psychopath) and the millions spent on his behalf by a billionaire benefactor, propelled Vance to a narrow primary victory.

As Nov. 8 closes in, the Hillbilly Elegy author has reinvented himself again. What worked on a rabid MAGA base might make general election voters, suburban moms, and independents recoil in horror. Vance must smooth the scary edges of his radical makeover. Appear more mainstream than extreme. To that end, his campaign rolled out its first TV ad for a broad electorate with a decidedly feel-good, instead of fascist bent.

The comfy commercial, narrated by Vance’s soft-spoken wife against a muted home background, extolls the virtues of a family-loving Republican who came up hard the way, served in the military and wants to fight for Ohio. Typical political fare of warm and fuzzy to mitigate immoderate and doctrinaire.

Of course, it tells Ohioans absolutely nothing about who Vance is, what he believes in, what he’ll do as a U.S. Senator and which campaign incarnation of the 38-year-old’s is authentic or opportunistic. But Vance’s exposure during the primary as a fascist-admiring extremist only Tucker Carlson could love tells voters plenty about his anything-but-mainstream positions.

The real deal is a real authoritarian who envisions a society under the jackboot of righteous conformity rigorously enforced. Gilead, if you will. But don’t take my word for it. Take his.

Vance talks about purging the government of nonbelievers, seizing the “institutions of the left,” replacing the American “regime” with loyalists of the New Right. “I think that what Trump (after he runs in 2024 and installs himself as king) should do, if I were giving him one piece of advice: Fire every single midlevel bureaucrat, every civil servant in the administrative state, replace them with our people.”

Vance uses “our people” as code for white Christian nationalists. “Our people aren’t having enough children to replace themselves.” When he fixates on babies and the need for more of them —which is all the time — Vance is not referring to nonwhite babies or immigrant babies. More of those babies, from an immigrant “invasion,” would replace real Americans. “You can’t have so many people coming to the country at a time when our own families aren’t replicating themselves.”

Dog whistle for the racist “white replacement theory.” When Vance isn’t obsessing over white birthrates and white fertility, he’s suggesting parents should get more votes than nonparents. So much for one man, one vote. Why can’t we incentivize bigger families like Hungary’s authoritarian leader, he asked, before submitting that the more babies parents have the more power they ought to wield over childless Americans. Extreme enough for you?

Women need to get with the program in Vance’s 1950s version of 2022. He insinuated that they’ve been duped into day jobs to ditch motherhood. “If your worldview tells you that it’s bad for women to become mothers but liberating for them to work 90 hours a week in a cubicle at the New York Times or Goldman Sachs,” Vance tweeted, “you’ve been had.” Gullible ladies should be tending to home and hearth and American babies.

As if that wasn’t insulting enough to over half the voting population in Ohio, Vance wants to ensure that women have no choice about having babies. “It’s not whether a women should be forced to bring a child to term,” he said, (about his forced-birth, abortion bans without exception platform) “it’s whether a child should be allowed to live, even though the circumstances of that child’s birth are somehow inconvenient or a problem to society.” Like the inconvenient pregnancy of a 10-year-old rape victim in Ohio Vance would have give birth.

Vance is shedding his right-wing veneer in an idyllic political ad about a man who loves his wife and kids. The smiling millennial with a Midwestern beard, from his last metamorphosis, isn’t wearing a red hat but that doesn’t belie the snakeskin he’s stepping over.