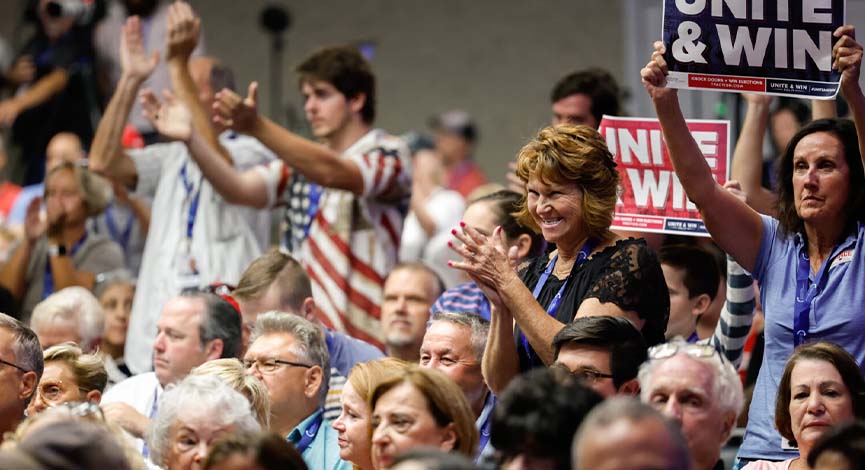 More than a thousand chairs were lined up in long neat rows, in a Girard, Ohio ballroom Friday. Organizers had laid out placards reading “Unite & Win” on each one, alternating in navy blue and red. A disco ball hung above the lectern.

People began lining up early Friday afternoon outside the Metroplex Expo Center eager to see Republican U.S. Senate nominee J.D. Vance and Florida Gov. Ron DeSantis. A man marched up and down the line waving a massive flag reading “Trump Won,” which, while true in 2016, was not true in 2020 when Donald Trump lost the U.S. presidential election.

The Florida governor’s Mahoning Valley visit was the last leg of a three-state tour backing conservative U.S. Senate candidates, and perhaps, the groundwork for return trips in 2024. 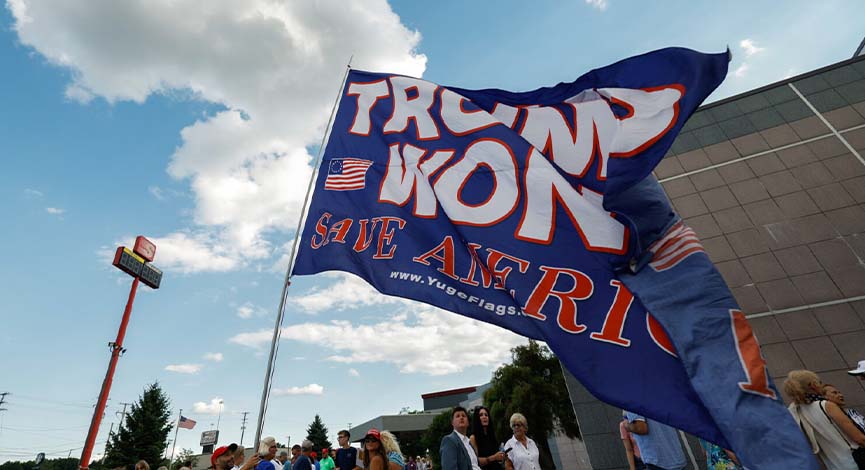 The rally made news well ahead of Friday. Turning Point Action, the conservative youth group organizing the event, initially said Youngstown’s Maronite Center would host. The facility operator shot that down shortly afterward — it was already booked for an annual church festival.

And so the Metroplex, with bathrooms tiled in a 1980’s mix of grey, mauve, and plum, and half the building now serving as a self-storage facility, was pressed into service.

Turning Point also raised eyebrows with an unusual set of demands for the press. According to a media policy, the organization “reserved the right” to demand footage for future “archival and promotional purposes,” and threatened to limit reporters from speaking to all but pre-selected attendees. Numerous outlets that would ordinarily cover such events passed. Chris Quinn, editor of Cleveland.com wrote a scathing letter explaining their rejection of the event.

Ahead of the event, right in Democratic nominee Tim Ryan’s backyard, he sent out a cheeky “itinerary” for Vance and DeSantis’ visit.

“I know you’re both new to Ohio,” Ryan began, before listing off a series of stops that highlight local restaurants and the region’s emerging electric vehicle and green energy manufacturing sector.

“As someone who was born, raised, and still lives in the Mahoning Valley,” Ryan said, “I hope my expertise can help you learn a little bit more about our world-class businesses, booming new Voltage Valley.”

In an emailed statement the Ohio Democratic Party said, “Ron DeSantis and J.D. Vance deserve each other — they both flipped on Trump on a dime and abandoned their states in order to promote themselves.”

With dangling light fixtures and a sprawling footprint, the ballroom ceilings seemed low, and only felt closer as the crowd filtered down the rows. A little after 7 o’clock they started a chant of “Let’s go Brandon.”

Friday’s rally was easily Vance’s most significant campaign appearance since winning the Republican U.S. Senate primary in May. While it’s typical for campaigns to gear down in the summer, Vance’s slow fundraising and continued absence on the campaign trail has rattled some in the GOP.

The extent of the party’s concern came into sharper focus Thursday. The Senate Leadership Fund, a campaign committee tied to Senate Minority Leader Mitch McConnell, committed $28 million to get Vance elected. The announcement marks a major escalation in spending. Earlier in the week, other campaign committees with ties to national Republicans promised roughly $5 million. 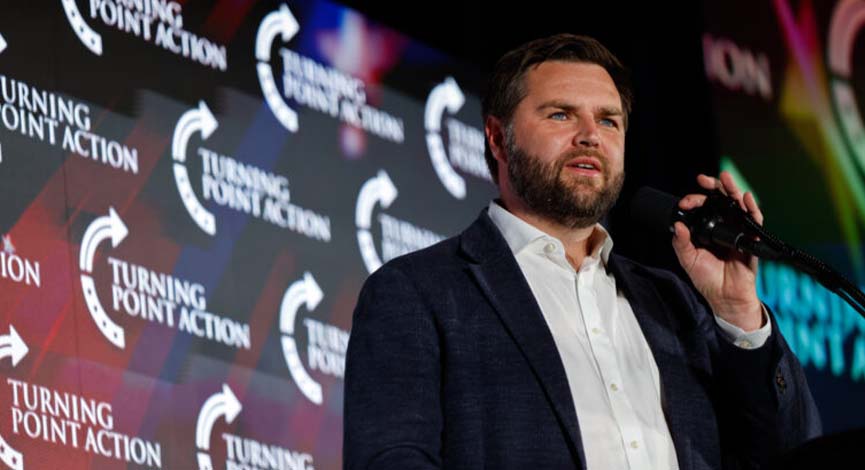 On stage, Vance leaned on familiar themes like securing the border and protecting American workers. He drew a straight, bright line between illegal border crossings and fentanyl trafficking — a dubious connection because most seizures occur at established ports of entry.

“This has nothing to do with hating anybody south to the border,” Vance said. “We want a secure border because we love the people north of the border.”

Vance also underscored the similarities between his hometown, Middletown, and the Mahoning Valley. Both former manufacturing hubs saw marked economic declines as those jobs moved overseas.

But most notably, Vance invoked red meat, COVID-skepticism more forcefully than he has in the past.

“Most recently,” Vance said, “there was something that happened in this country that required courage and it required leadership. And that was when Joe Biden and Tim Ryan said that in order to work, in order to earn a living, in order to put bread on the dinner table of your children, you had to get big pharma’s vaccine.”

“Now, ladies and gentlemen,” he added over a chorus of boos, “that was disgusting, and it was wrong.”

It was a strange attack line to describe as “most recently.” On Twitter and in a handful of recent campaign stops, Vance has spent most of his time criticizing Ryan’s vote on the Inflation Reduction Act. The U.S. Supreme Court struck down the most sweeping federal vaccination provisions more than seven months ago, without those provisions ever taking effect. As it stands the military and health care workers must get vaccinated unless they’re granted a medical or religious exception.

DeSantis offered the crowd a vision of a muscular Republican administration responsive to the demands, or fears, of the party’s most conservative faction. He recited a laundry list of state legislation he’s signed: a ban on vaccine passports, “don’t say gay” legislation, a crackdown on protesters, prohibitions on critical race theory and gender affirming care, as well as a bill to “protect the integrity and fairness of women’s sports.” 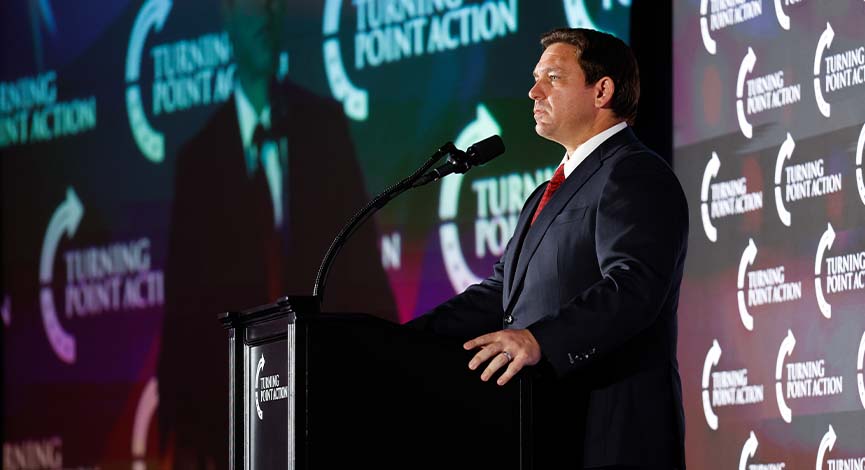 “Don’t just sit back and let the left eat your lunch,” DeSantis insisted. “Go on offense.”

“Important issues, get out in front of things and keep the other side on their toes,” he said, “and that’s what we’ve done time and time again.”

It’s not clear yet whether DeSantis’ offensive prowess will remake the state in his image or reveal itself as the empty calories of conservative wish-fulfillment. His administration faces a string of lawsuits over his actions. Last Thursday a federal judge struck down his priority Stop WOKE Act.

Although DeSantis took care to weave Vance into his 45-minute speech, his abiding focus — Ron DeSantis — raised obvious questions about the governor’s visit and longer-term ambitions. In a potential 2024 presidential bid, Arizona, Pennsylvania and Ohio represent substantial prizes in both the electoral college and the Republican National Convention delegate count.

In public, DeSantis has deflected questions about running, but his allies are already laying the groundwork. On stage, he repeatedly took aim at President Joe Biden. Meanwhile, he barely mentioned “your congressman here, who votes with Pelosi and votes with Biden 100% of the time.”

The full armor of God

Throughout, DeSantis stoked fears. Federal agencies created a “Faucian dystopia,” he said. They’ve been “weaponized,” he claimed, by the administration to “render the conservative half of the country second class citizens.” Vance’s emphasis on vaccine skepticism marked another notable escalation of the fear and grievance index, as well. 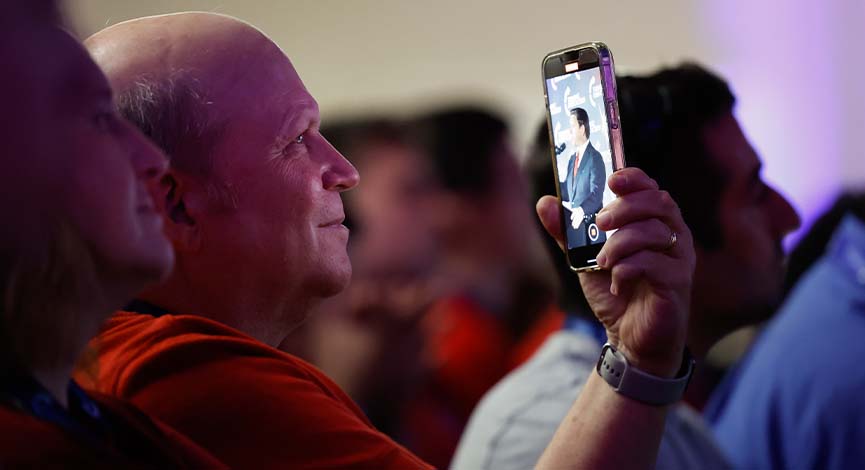 The response DeSantis offered to those fears was the language of war. In a strange echo of Winston Churchill, DeSantis committed to oppose the “mind virus” of “woke ideology.”

“And I can tell you this,” he added, “under my leadership, the state of Florida is where woke goes to die.”

He recalled how as a congressman flying into D.C., he marveled at the view from one side of the plane, including the National Mall and monuments. After a while, though, he came to appreciate the view out the other side, of Arlington National Cemetery.

And lest anyone miss the point, he went on, putting the onus on the crowd.

“So buckle up, put on the full armor of God, take a stand against the left’s schemes, stand firm, stand your ground, don’t back down,” he exhorted. “I’m on a mission to keep Florida free, let’s make sure Ohio remains free, and let’s take our country back.”