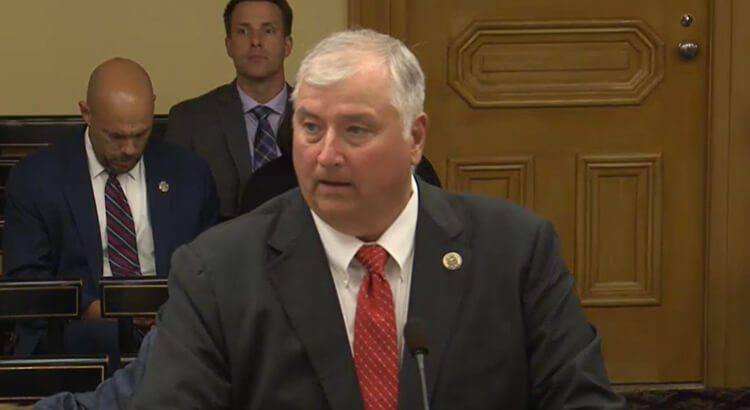 Federal prosecutors who brought a sweeping criminal case against FirstEnergy Corp. and Ohio House Speaker Larry Householder are now asking state regulators to hold off on their own investigations into the matter.

In a letter to the Public Utilities Commission of Ohio, Kenneth L. Parker, the U.S. Attorney for the Southern District of Ohio, asked the regulators to stay their four investigations into FirstEnergy’s conduct, which overlap in part with the prosecution. He asked for a freeze of at least six months.

In July 2020, prosecutors charged Householder and four allies with taking $60 million from FirstEnergy and using it for personal enrichment, political gain, and to engineer passage of favorable legislation worth an estimated $1.3 billion to the company. Two of them have since pleaded guilty to racketeering. Householder has pleaded not guilty and awaits trial.

FirstEnergy admitted last summer to the allegations against Householder, and also that it paid Randazzo himself a $4.3 million bribe. The admission came in a deferred prosecution agreement with prosecutors. The company agreed to pay a $230 million penalty, cooperate with the investigation, and publicly admit to the pay-for-play operation.

Randazzo has not been charged with a crime.

The Ohio Consumers’ Counsel has pushed for more information from FirstEnergy and its relationship with Randazzo in the PUCO investigations. The agency’s factfinding collided with the U.S. Department of Justice during a July 21 deposition of Ebony Yeboah-Amankwah, the company’s former general counsel, as the Ohio Capital Journal previously reported.

The OCC asked several questions related to FirstEnergy’s payments to companies owned by Randazzo. Documents obtained by the OCC from FirstEnergy show Yeboah-Amankwah’s name on a 2016 invoice from Randazzo’s company. Other emails show correspondence between them on the subject.

Lawyers for both Yeboah-Amankwah and FirstEnergy objected to the line of questioning, citing a purported conflict with the criminal investigations. After a ruling from the PUCO allowed the questioning, a FirstEnergy attorney called a federal prosecutor handling the case seeking to cut it off.

“I would just say nobody is trying to prevent consumers from getting access to this information and to these witnesses,” said Adam Hollingsworth, an attorney representing FirstEnergy, according to a transcript of the hearing.

“It’s just a matter of timing, and the U.S. Attorney’s office has represented to us that the timing of these questions would materially impact their investigation.”

“We don’t believe that the questions that have been posed here are proper,” Lape said.

Lape did not respond to an email Tuesday night.

Other parties to the case objected to FirstEnergy’s request, noting that the investigations have a distinct interest of protecting consumers. Plus, they said the PUCO shouldn’t take FirstEnergy’s word for what the DOJ may have said. The PUCO sided with FirstEnergy, blocking further questioning of nonpublic information relating to the deferred prosecution agreement.

A spokeswoman for the U.S. Attorney’s office said at the time that its goal is to keep the public informed. She noted the office’s success in securing the deferred prosecution agreement and said “information will become public in due course.”

“For two years the Consumers’ Counsel has been battling to obtain truth and justice at the PUCO for customers of scandal-ridden FirstEnergy. Now the Ohio public is facing potentially more unwelcome delay in getting answers,” she said.

Householder is set to face trial in January 2023.