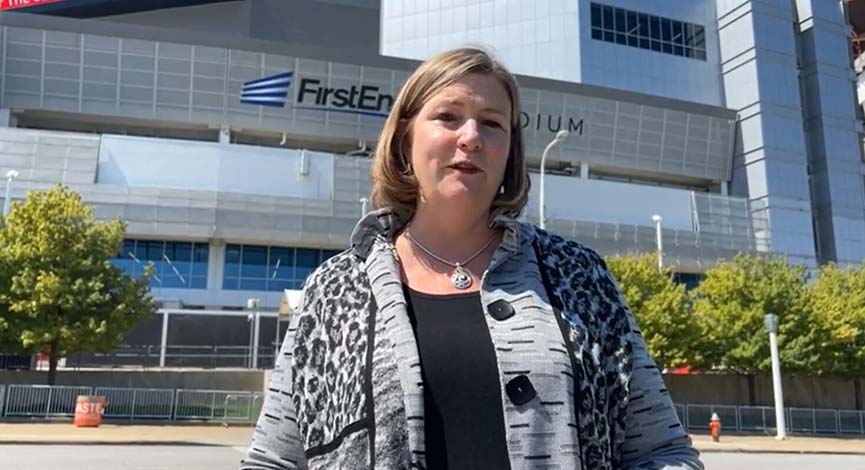 Democrats are hammering the administration of Ohio Gov. Mike DeWine for a rash of stories over the last few months they say raise serious ethical questions that highlight the need for changes to Ohio law.

In late May, Ohioans learned that Lt. Gov. Jon Husted quietly took a seat on a bank’s board a few months earlier. As chief of the DeWine administration’s Common Sense Initiative, which reviews state regulations to “to propel job and economic growth in Ohio,” the lieutenant governor’s influence could offer substantial, and potentially unfair, advantages to a bank looking to expand.

It took Husted more than a month to reveal how much he was making on the board.

More recently documents related to the FirstEnergy bribery scandal indicate DeWine and Husted played a much more active role than previously known. Text messages describe the two men performing “battlefield triage” to secure Sam Randazzo’s seat heading up the state utility commission. Randazzo resigned after FirstEnergy admitted to paying him a $4.3 million bribe but has not been charged and denies wrongdoing.

In a pair of press conferences Thursday, Democrats pitched plans to ensure accountability and prevent similar behavior in the future.

Stop me if you’ve heard this one…

In Cleveland, Democratic nominee for governor Nan Whaley stood on a street corner in front of FirstEnergy Stadium, using it as a backdrop for her criticism of the DeWine administration’s role enriching the company through HB 6.

“Frankly more and more, their name should be on the governor’s mansion, too.” Whaley said.

Whaley was particularly angry about a familiar issue.

“What is especially troubling is that they’ve been doing this work with their private emails to avoid detection, and thus far have refused to release any of those records,” Whaley said.

“So again, today I’m calling on DeWine and Husted to release all — all of their private emails and texts about this scandal,” Whaley said. “That includes any communications with legislators which John Husted has refused even to discuss.”

DeWine spokesman Dan Tierney dismissed Whaley’s demands as “disingenuous,” and argued “she knows better than that.”

He acknowledged DeWine uses a personal email account but treats any messages related to public business as a public record, and he regularly shares those emails when they’re requested.

“It would be beneficial for Ohioans to see greater transparency from Ms. Whaley on this matter instead of her trying to push baseless smears,” campaign spokeswoman Tricia McLaughlin said in an emailed statement.

That investigation was closed, however, and Whaley was never charged.

Late last year her campaign issued a “fact check” document that cited and responded to multiple portions of the court documents. In it, Whaley noted she was not a target of the investigation and she had never met or interacted with the person who accused her of wrongdoing.

In a statement at the time Whaley said, “Investigators did exactly what they should do: thoroughly looked into it and found nothing.”

She insisted she was glad the FBI stepped in to “root out corruption” in the city, and even found a chance to take a shot at DeWine.

“Unlike our current governor,” she added, “when I realized that there was a corruption problem in my city I took immediate action to address it and prevent it from happening again.”

House minority leader Allison Russo joined Reps. Casey Weinsten, D-Hudson, and Mary Lightbody, D-Westerville, Thursday to announce a new State Official Integrity Act. The measure would prohibit statewide elected officials from performing private work or holding any private position for which they receive compensation. The only exception is compensation from serving in the armed forces.

Rep. Weinstein called Husted’s decision to take a seat on the board of Heartland Bank “a slap in the face.” If passed, he said, their proposal would require officials forfeit their office if they took on private position while serving.

The measure applies to governor, lieutenant governor, attorney general, auditor, treasurer, secretary of state and any state supreme court justice, but not representatives or senators. Russo explained lawmakers representing a district, rather than the state as a whole, fall into a different category.

“Our Constitution requires that our legislature is a part time citizen legislature which means that many of our members are encouraged to be members of their community,” Russo said. “That means holding employment, participating on boards, sometimes they may be compensated for that. I think the distinction here is we’re talking about statewide officials — these are full-time, well-paid positions.”

Rep. Lightbody added sometimes lawmakers have to give up private roles to avoid even the perception of a conflict of interest. She recalled having to step down from her spot on the Westerville Public Library board after her election.

“That’s certainly an indication of the standard of ethical behavior that we’re expected to be held to, and we’re simply asking that our statewides, who do have full-time jobs with the state and represent all Ohioans, hold to at least the same standard that were expected to hold.”

The measure charges the Ohio Ethics Commission with enforcement of its provisions.

In an emailed statement Lt. Gov. Husted’s spokeswoman said, “We appreciate their acknowledgment that the Lt. Governor has followed all of the rules.”

“Certainly,” she added, “if they change the rules in law, he’ll of course follow the new ones as well.”