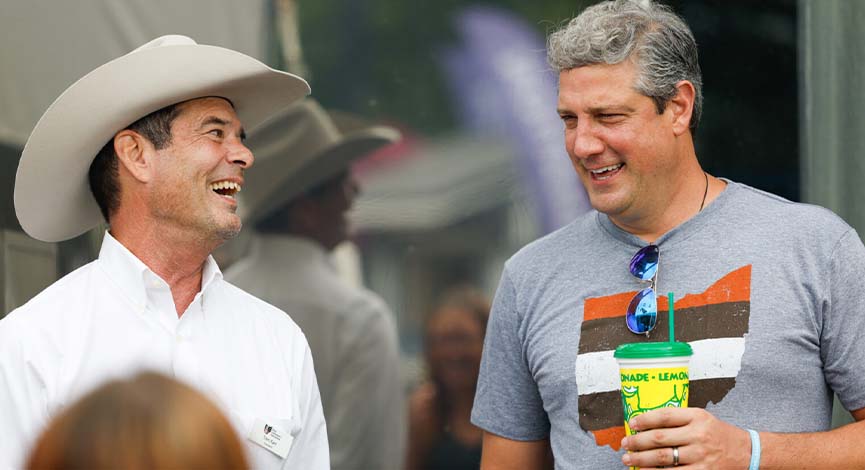 Democratic U.S. Senate nominee Tim Ryan bashed his Republican opponent J.D. Vance as “clueless,” and disengaged with policies that matter to Ohioans. Ryan spoke at the Ohio state fair a few days after Vance made a visit of his own.

Shortly after judging a ribs and pulled pork competition last Tuesday, Vance declined to weigh in on so-called burn pits legislation or the political maneuvering that put the measure on life support before eventually passing.

“I honestly haven’t paid much attention to it, but I think that obviously veterans who are exposed to toxic injuries, we should be taking care of them,” Vance said. “The specific legislation, I’d be lying if I said I knew anything about it, other than it took care of veterans, which is a good idea to me.”

That wasn’t good enough for Ryan.

“This burn pits legislation has been on the agenda for two years. It’s named after Heath Robinson who died as a veteran from Ohio,” Ryan railed. “And every veteran — especially one who served like him — every veteran, Iraq and Afghanistan, knows about burn pits, and he’s asked about it and he doesn’t know? That just shows you he has no interest in representing the people of this state.”

We have sky high inflation and an economy now officially in recession. But don’t worry, Tim Ryan and his Democrat buddies have a solution: tax credits for rich people to buy electric cars made in China. What a joke. pic.twitter.com/RtcdiIQYov

Ryan also took Vance to task for criticizing electric vehicle subsidies contained in the Inflation Reduction Act — the climate, health care and corporate tax package the Senate announced a little more than a week ago. Vance dismissed the deal in a Twitter post the day after it’s announcement and insisted a recession has begun.

“But don’t worry, Tim Ryan and his Democrat buddies have a solution: tax credits for rich people to buy electric cars made in China. What a joke,” Vance wrote.

Ryan argued more affordable electric vehicles are on their way to market — some of them built in Ohio.

“This is exactly why he has no clue of what’s going on in Ohio. Fisker Motors is going to take up half the old General Motors Lordstown plant, their car is going to be under $30,000,” Ryan said. “That doesn’t sound like you know, (a) millionaire — that’s a working-class person’s car.”

Asked about what he can accomplish in his current term if he doesn’t win in November, Ryan zeroed in on the deficit reduction and prescription drug provisions in the Inflation Reduction Act. Then he went on, stacking up other recent accomplishments — the CHIPs Act, the bipartisan infrastructure deal, a long-sought fix for multi-employer pension plans.

On the stump and on TV, Ryan makes no secret of his skepticism for the Democratic Party. He’s more than happy to tout his affinity for Republican policies, including Donald Trump’s.

But now, assuming lawmakers can get the latest legislative package across the finish line, the Biden administration has put together a string of pretty respectable policy achievements. Vance’s claims about a recession notwithstanding, the country continues adding jobs. Gas prices, a favorite stalking horse among conservatives, continue to decline steadily.

Despite readily invoking the policy wins, Ryan doesn’t seem inclined to move off from his broader message.

Avoiding an unpopular president during the midterms is nothing new, but Ryan’s vision is a kind of post-party coalition with himself at the center. It winds up looking like a socially liberal version of the Democratic Party he first ran in 20-odd years ago. But after Jan. 6, COVID-19, and the Dobbs decision — as Ryan understatedly alludes to it, “everything that’s happened in the past few years” — voters rallying to some imagined middle ground promised by one party’s candidate can feel exceedingly optimistic.

“We’re going to have fights,” Ryan went on, tempering his pitch somewhat, “but let’s have them about how do we have successes, and then we can argue about who takes credit for the successes as opposed to arguing about whose fault it is.”