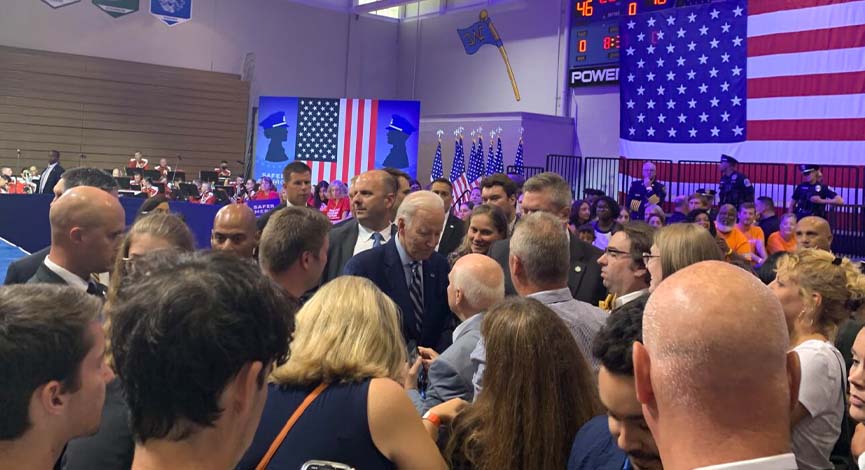 “You can’t be pro-law enforcement and pro-insurrection,” Biden said.

The president also referenced the FBI search at former President Donald Trump’s Mar-A-Lago residence in Florida, which has led to threats against the agency.

“Now it’s sickening to see the new attacks on the FBI,” Biden said, “Threatening the life of law enforcement agents and their families for simply carrying out the law and doing their job.”

The rally came amid a week of repeat trips to the state that handed Biden the White House in 2020. On Thursday, Biden will give a primetime address from Philadelphia on threats facing the nation’s democracy. On Monday, he’s scheduled to travel to Pittsburgh for Labor Day observances, the Capital-Star previously reported.

Biden spent several minutes at the end of his rally contrasting his work to add 100,000 police officers to America’s communities, strengthen gun control and advance mental health issues with the rioters who stormed the capitol and those who defend them.

The president took his legislative agenda to the Marts Center in downtown Wilkes-Barre a month after his bout with the coronavirus scuttled a previously scheduled visit.

He framed his policy as supporting robust community policing, while hedging with language about bad policing being held accountable.

Outlaw was happy with his “overall recognition that public safety is an ecosystem.”

Police, she said, have to work with social services and others to ensure their communities are safe.

Outlaw agreed, saying that a lot of cuts have come to departments while those same officers are asked to take on extra roles. Outlaw’s department was set to see its budget rise in this year’s Philadelphia city budget, according to the Philadelphia Inquirer.

She said Biden’s agenda could help community policing by taking police out of their cars and putting them into communities. She pointed out that you can drive around one block several times before you notice all the things you would just walking on it.

That would help build trust, she said.

More than 30 years have passed since a president was able to get both parties in congress to agree on gun reform.

During that time, school shootings have become a consistent tragedy, from Columbine and Newtown to Parkland and Uvalde, Texas.

Pennsylvania hasn’t been spared from the violence.

In 2003, a student killed a principal and himself using his father’s handguns in Red Lion, York County. And n 2006, a gunman killed five girls at the West Nickel Mines School in Lancaster County.

“You have to ask, Biden said. “Are our kids learning to read in school, instead of learning to duck and cover.”

The law Congress passed, and that Biden signed, includes enhanced background checks for purchasers who are younger than 21. The law will also ban the manufacture, sale and possession of guns that do not have serial numbers.

He talked about meeting with parents of students who died in Uvalde, Texas, having to submit DNA to identify their kids.

He showed his exasperation.

About two hours before Biden arrived, Chris Walsh, a member of the Laborers’ International Union of North America, took pictures of his colleagues as the Marine Corps Band played songs from “Les Miserables. Walsh said he was there “to support the president who supports the causes closest to us.”

The Dallas, Luzerne County, resident also enjoyed being able to see a president for the first time.

“Being from a small town, being able to see a president of the United States,” he said, “It’s kind of historic for me.”

While he supported the president’s policies he admitted he was a bit skeptical about gun legislation.

However, when it comes to schools, something has to be done.

“I think we’ve gotten to the point where we have to, unfortunately,” he said.

Before speaking to the crowd, U.S. Rep. Matt Cartwright, D-8th District, spoke to the Capital-Star about what he was most proud of in the Safer Communities Act.

“Certainly I’m all in favor of beefing up community oriented policing funding,”said Cartwright, who will face Republican Jim Bognet this fall in a rematch of their 2020 contest., “And this does a lot of that.”

He also said he is impressed by the focus on mental health issues.

He said this could help prevent a lot of crimes.

“This takes solid steps in solving that crisis,” Cartwright said.

One person who was excited to meet the president was Brooklyn Hamer, a 9 year old who attends Robert Morris Elementary in Scranton.

“He was friendly,” she said, after getting a picture with him.

She plans on bragging to her classmates about her adventures Tuesday. After all, she said she is the first person in her class who has met the president.

Hamer’s mom, Brittani, said she was impressed with what Biden said Tuesday.

“I am totally on board with the president’s plan,” she said.

This story was republished from the Pennsylvania Capital-Star under a Creative Commons license.