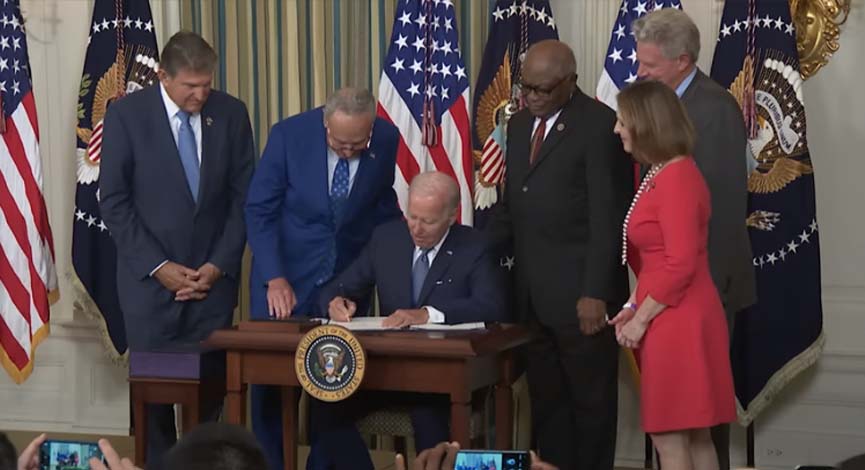 A screenshot of the Inflation Reduction Act signing ceremony at the White House on Tuesday, Aug. 16, 2022. (via The White House / YouTube)
ShareTweet

President Joe Biden signed his party’s signature climate, health care and tax package into law Tuesday, capping off more than a year of tumultuous negotiations that saw his original proposal to Congress slimmed down considerably.

Flanked by a handful of Democrats, including Senate Majority Leader Chuck Schumer, House Majority Whip Jim Clyburn and West Virginia Sen. Joe Manchin III, Biden sharply contrasted his outlook for the country with that of Republicans, who unanimously voted against the package.

“My fellow Americans, that’s the choice we face — we can protect the already powerful or show the courage to build a future where everybody has an even shot,” Biden said. “That’s the America I believe in.”

The law, which passed the U.S. Senate following a 51-50 vote and the U.S. House on a party-line 220-207 vote, totals about $750 billion in new spending, though it would actually reduce the country’s deficit in the long term by allowing Medicare to negotiate some prescription drug prices and changing a handful of taxes.

The signing Tuesday at the White House was attended by just five Democrats, in part because Congress is in the middle of its August recess with lawmakers back in their home states campaigning ahead of the November elections. Reps. Frank Pallone of New Jersey and Kathy Castor of Florida accompanied Manchin, Schumer and Clyburn.

But Biden, who returned to Washington, D.C., to sign the bill after vacationing at a South Carolina beach, plans to hold a second event to mark the bill’s enactment on Sept. 6. That celebration will likely have many more Democrats in attendance.

No Republicans voted for the package, which Democrats advanced using the complicated budget reconciliation process that gets around the U.S. Senate’s legislative filibuster.

Biden said Tuesday that the new law would set up Americans for a better future.

“The bill I’m about to sign is not just about today, it’s about tomorrow,” Biden said.

“It’s about delivering progress and prosperity to American families, it’s about showing the American people that democracy still works in America, notwithstanding all the talk of its demise.”

The law, which will roll out in phases over the next few years, will funnel $370 billion to clean energy programs, including electric vehicle tax credits and tax incentives for energy companies to produce renewable energy.

Biden said that the “bill is the biggest step forward on climate ever.”

The cost of insulin for Medicare patients would be capped at $35, though Democrats were unable to keep a provision in the final agreement that would have capped the monthly co-pay for people with private health insurance.

The proposals throughout the package are paid for by instituting a 15% minimum tax on corporations with incomes more than $1 billion and a 1% excise tax on stock buybacks, as well as by allowing Medicare to negotiate some prescription drug prices.

Boosting Internal Revenue Service coffers by $80 billion to increase compliance with tax laws already in place as well as the new changes is expected to bring in additional revenue, helping to further offset the roughly $750 billion price tag for the package.

The IRS funding would be divided up with $46.5 billion to bolster staff and update technology, $25.3 billion for operations support, $4.8 billion to update business systems and $3.2 billion for taxpayer services.

Treasury Secretary Janet Yellen wrote in a letter to IRS Commissioner Charles P. Rettig earlier this month that the federal government’s boost in funding for the agency would not lead audit rates to “rise relative to recent years for households making under $400,000 annually.”

“Instead, enforcement resources will focus on high-end noncompliance,” Yellen wrote.

While the legislation, named the Inflation Reduction Act, is expected to reduce the nation’s deficit, it likely won’t have much of an impact on inflation, according to the nonpartisan Congressional Budget Office.

The agency’s analysts wrote that the “the bill would have a negligible effect on inflation” during the current year and that during 2023 “inflation would probably be between 0.1 percentage point lower and 0.1 percentage point higher under the bill than it would be under current law.”

The Penn Wharton Budget Model from the University of Pennsylvania had a similar assessment, estimating that the law “would have no meaningful effect on inflation in the near term but would reduce inflation by around 0.1 percentage points by the middle of the first decade.”

“These point estimates, however, are not statistically different from zero, indicating a low level of confidence that the legislation would have any measurable impact on inflation,” The Penn Wharton Budget Model said.

The legislation, originally pitched by Biden as a multi-trillion-dollar proposal dubbed Build Back Better, took more than a year to come together.

Democrats in the U.S. House originally passed a $2 trillion package last November before the legislation stalled out in the U.S. Senate amid disagreements between progressive and centrist Democrats about the size and elements of the bill.

Manchin and Schumer, a New York Democrat, relaunched negotiations earlier this summer following many starts and stops during the first half of the year.

At the time, many Democrats were skeptical anything would come of the closely held, private talks, but encouraged the two to reach a final agreement that would meet some of the party’s goals.

The duo announced the surprise agreement on July 27, but Schumer needed to make some tweaks to the bill to get Sinema on board.

With the support of all 50 of the Senate’s Democrats secured, Schumer brought the legislation to the floor for debate and an all-night amendment voting session known as vote-a-rama earlier this month.

The Senate passed the measure on a 51-50 vote on Aug. 7 with Vice President Kamala Harris casting the tie-breaking vote amid uniform Republican opposition.

The package then cleared the U.S. House on Aug. 12 after members broke their summer recess to return to Capitol Hill to debate and then vote on the bill.

Biden and many of his Cabinet secretaries are expected to travel throughout the country in the coming weeks to champion the new law ahead of the November midterm elections.

Progressive Democrats have already begun making their pitch to voters on the provisions left by the wayside, telling constituents that those proposals could become law if more Democrats are elected to Congress later this year.

Republicans, who uniformly voted against the bill, are making the opposite case.

During floor debate and on the campaign trail, GOP lawmakers say the law will increase energy costs, lead to IRS audits on families and small businesses, and harm the economy.

“Our economy is in a fragile state as we emerge from this pandemic,” Michigan GOP Rep. Fred Upton said during floor debate, while touting his support of several bipartisan packages this Congress. “We have seen decades-high inflation that is crushing Main Street and squeezing the middle class.”