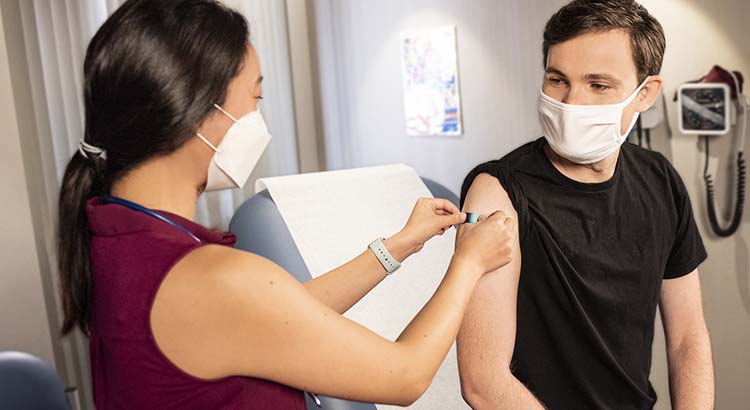 Federal public health officials said Thursday they are working with state and local health departments to boost messaging and vaccinations for those most likely to contract monkeypox, including at large-scale events.

But Biden administration officials at a press briefing also struggled to explain differing statements about how the vaccines should be administered, a crucial part of the White House strategy.

The U.S. Food and Drug Administration approved an emergency use authorization earlier this month to switch from giving the vaccine subcutaneously, the way most people are used to receiving a vaccine, to intradermally, or just below the skin.

Bavarian Nordic, the only company that makes the Jynneos vaccine, has raised concerns about the FDA decision, as have some local and state health departments. There is also not much data available yet on which jurisdictions are using the new strategy.

CEO Paul Chaplin sent a letter to U.S. Health and Human Services Secretary Xavier Becerra and FDA Commissioner Robert M. Califf about  the plan, according to The Washington Post.

He wrote that the company has “some reservations” on the intradermal approach, “due to the very limited safety data available (<200 people), the higher reactogenicity compared to the JYNNEOS standard dose and route (subcutaneous [SC]), and the fact that there was a relatively high percentage of subjects (20%) that failed to receive the second vaccination during a controlled clinical study.”

Reactogenicity refers to the body’s response to a vaccination, which can include pain or swelling at the injection side, as well as fever, muscle pain, or fatigue depending on the vaccine and the person receiving it.

But Biden administration officials during the press briefing defended their recommendation for a new way of administering shots, which is expected to provide up to five doses per vial instead of one, as safe and effective.

Peter Marks, director of the FDA’s Center for Biologics Evaluation and Research, said the administration decided to switch the way health care providers administer the shot after some health departments began telling residents they would give one shot instead of the complete two-dose regimen in order to stretch out the limited vaccine supply.

“Some of this was in response to seeing additional use of a one-dose delayed strategy, which was … very concerning because of the absence of data and the emergence of some data to suggest that that might be a strategy that is not as effective as we would like it to be,” Marks said.

The switch from subcutaneous vaccination administration to intradermal, Marks said, was “done very carefully, with a lot of thought.”

“And we are working very actively to make sure the community has the information that we reviewed, and can see the thought process that we use to come to the conclusion that giving this intradermally provided the same kind of protection” as giving it by the subcutaneous route, Marks said.

Centers for Disease Control and Prevention Director Rochelle Walensky said the federal government is working closely with local and state health departments to provide information and vaccines at large-scale events the LGBTQ community is expected to attend.

While anyone can get monkeypox, which spreads through close personal and often skin-to-skin contact, it has mostly affected the LGBTQ community.

So far, available data on the 13,517 U.S. cases of monkeypox, she said, show that 98% of cases are currently in men and that “among cases with known recent sexual history and gender, 93% of cases were among men who reported recent sexual contact with other men.”

Within the 6,000 cases with race and ethnicity data, Walensky said, 35% are among white people, 33% among Hispanic individuals and 28% among  Black people.

The median age of those contracting monkeypox is 35, she said.

To try to curb the spread in the most affected communities, the federal government is launching a pilot program to provide additional vaccine doses to areas hosting events expected to draw many LGBTQ people.

The gatherings, she said, are expected to provide a chance for public health officials to explain the switch to intradermal vaccine administration and reiterate that people need to receive two doses

The CDC is asking local and state health departments in those areas to share “how they will promote education and awareness, as well as how they will address health equity in delivery of both messaging as well as vaccine.”

The CDC, she said, will also publish a “toolkit” to help public health officials prepare for those events.

Walensky stressed that since the vaccine is a two-dose regimen, “receiving the vaccine at these events will not provide protection at the event itself” and that anyone who traveled to an event must get the second dose after returning home.

But she also reiterated that CDC is still collecting data on how well the Jynneos vaccine, which was approved in 2019 to prevent smallpox and monkeypox, will work during this outbreak.

“To be clear, we’re learning how well these vaccines work against monkeypox and in this specific outbreak,” she said. “From what we know right now, we expect protection to be the highest two weeks after the second dose of the vaccine.”

While public health officials “anticipate vaccines will provide protection,” she said, “temporarily reducing or avoiding behaviors that increase your risk of monkeypox exposure is important, especially between your first and second doses of vaccine.”

The federal government so far has distributed 700,000 vials of Jynneos nationwide, according to Dawn O’Co​nnell, assistant secretary for​ preparedness and response at HHS.

The federal government on Monday, she said, will make about 360,000 vials or up to 1.8 million more doses available for health departments to order.

The distribution of future vaccine doses will be contingent on local or state health departments adopting the new intradermal vaccine administration process and having used 90% of their previously allotted vaccines, according to Robert Fenton, the White House’s national monkeypox response coordinator.

The Biden administration doesn’t have particularly strong data on that, however.

Fenton and Walensky both said the information about which jurisdictions have switched and which have not is just starting to come in.

Walensky noted that CDC is continuing to provide information and training for health care providers who might not be experienced administering vaccines intradermally, adding that it’s crucial given the doses available.

“Ultimately, this is a precious resource we want to be used efficiently and wisely and that’s the purpose of this,” Walensky said. “So we’re really moving to get all jurisdictions to intradermal dosing.”