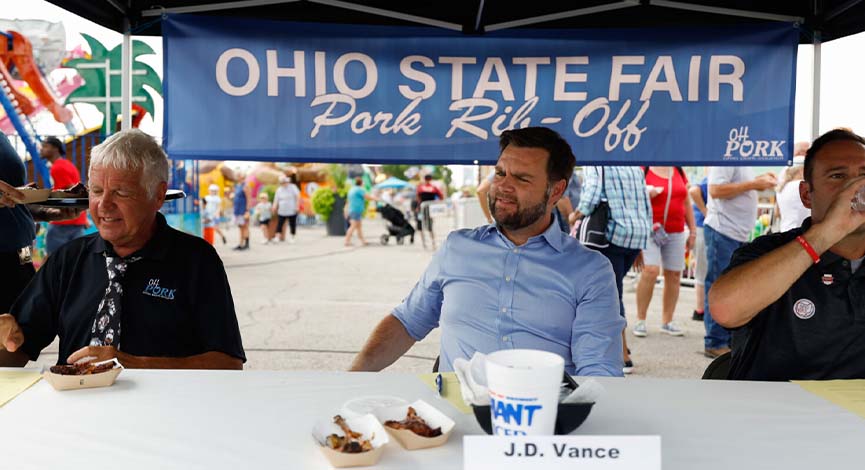 At the Ohio State Fair Tuesday, J.D. Vance downplayed the gap in fundraising that has opened up between himself and Democrat Tim Ryan. The Republican U.S. Senate nominee also elaborated on his opposition to the Respect for Marriage Act.

After a bruising primary, there were concerns that Vance might have a difficult time consolidating support among Republican voters. Fundraising figures reported last month gave some credence to that view. While Tim Ryan reported slightly over $9 million raised in the second quarter, Vance pulled in just $2.3 million.

Speaking to reporters, though, Vance argued that disparity is typical, and insisted he’s not worried about it.

“Democrats radically outraise Republicans — you see that across races across different offices,” Vance said. “And what ends up happening is that means Democrats usually are on TV earlier, but Republicans always have the resources necessary to get their message out there.”

Vance argued that Ryan has voted with President Biden “100% of the time,” and if voters know that, Vance will win the race.

He offered a handful of U.S. Senate races as examples of that funding pattern — specifically the 2018 race in Missouri but also the 2016 race in Ohio and even this year’s Senate race in Pennsylvania. Those comparisons don’t necessarily track with Democrats radically outpacing their GOP counterparts, though.

Sen. Josh Hawley, R-MO, did overcome a substantial fundraising gap in 2018 to oust former Sen. Claire McCaskill, D-MO. But after outside spending is taken into account, McCaskill’s funding advantage narrows from more than 3-to-1 to about 3-to-2.

In Pennsylvania, Democrat John Fetterman holds a fundraising edge over Republican Mehmet Oz, but at roughly 5-to-4, it’s not insurmountable.

In 2016, Sen. Rob Portman, R-OH, trounced Democrat Ted Strickland in fundraising, bringing in almost two and a half times what the former governor raised. What’s more, Portman was also the beneficiary of the biggest share of outside spending in Congress that cycle.

Last week, the Columbus based religious nonprofit Mission: America sent out a press release announcing Vance opposed the Respect for Marriage Act which would codify the right to same-sex or interracial marriages. The release went on to relate a quote from Vance that, “the religious liberty piece of this is very bad.”

Nothing in the Respect for Marriage Act implicates religious liberty. In short, the act says no public official should be deny the “full faith and credit” of a marriage based on sex, race, ethnicity or national origin, or deny “any right or claim arising from such a marriage.”

At the time, Vance’s campaign declined to elaborate on the question of how the measure intersects with religious liberty. That changed Tuesday.

“You want to ensure, of course, that people have respect in their situations,” Vance said. “You also want to make sure that if you’re a church or a nonprofit, you can actually run your church or nonprofit according to your own values and you have to be — you know that’s a balance we have to strike as a society, and I don’t think that law strikes a very good balance.”

It’s a puzzling justification given the legislation’s limited application to people “acting under color of State law,” which would seem to leave churches and nonprofits outside the bounds of its authority. The current U.S. Supreme Court also seems highly sympathetic to religious expression claims.

“I don’t know what problem it solves,” Vance said. “So I would not support it because, you have a sky high inflation crisis, you have a huge recessionary problem, and we’re arguing about rights that have already been granted by the Supreme Court?”

In its landmark 2015 Obergefell decision, the U.S. Supreme Court guaranteed the right to same-sex marriage. But the court has changed drastically since then, and the current majority’s willingness to honor previous decisions is dubious at best.

This summer, of course, the court was willing to roll back the national right to an abortion that the court itself had guaranteed for nearly five decades. The Respect for Marriage Act is gathering momentum specifically because Justice Clarence Thomas’ concurring opinion in that case floated the idea of revisiting and overturning court conferred rights like access to contraceptives and same-sex marriage.