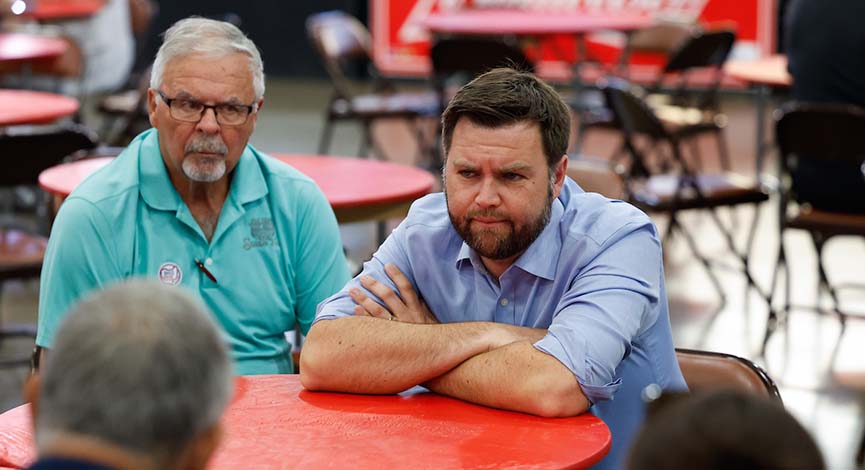 The dog days of summer are usually the time when political campaigns lay low, biding their time for a post-Labor Day blitz. Tim Ryan didn’t get the message.

Ryan poured more than $7.5 million into advertising since winning the Democratic U.S. Senate primary in May. Spending at that clip is a recognition of the challenge Democrats face winning over an increasingly Republican electorate. The content of Ryan’s ads only underscore that reality.

He’s been able to pursue this advertising strategy thanks in part to impressive fundraising. Despite his rapid spending, Ryan closed the second quarter with $3.5 million in cash on hand, giving him the cushion to keep airing ads through the summer. Meanwhile his opponent, J.D. Vance, finished out in the red.

The first $2,900 raised through Vance’s joint fundraising committee is earmarked for retiring that debt. A different Vance PAC, meanwhile, sets aside $2,900 for the campaign and $10,000 for the state party before paying down debts.

Ralph King describes himself as a “brutally honest type of guy,” and he didn’t hold back about Vance’s fundraising.

“What fundraising?” he asked.

The Cuyahoga County GOP committee member has roots in the local tea party and was an early supporter of Donald Trump. He’s also one of the signatories of a letter urging Trump to rescind his Vance endorsement ahead of the primary. King is still bitter about Donald Trump Jr.’s reflexive dismissal of Vance opponents as “RINOs.”

The RINO frauds attacking @JDVance1 HATE him precisely because they know he will shake up the establishment and put America First in the Senate!#OHSen pic.twitter.com/ngEN6LmvzS

King actually seems to like Vance as a person, describing him as smart, articulate and personable. But he’s skeptical of Vance as a candidate. To King, the biggest problem with the fundraising gap is what it suggests about the broader campaign’s capability.

“He’s mailing it in,” King said. “He’s not going to ‘Fox News’ voters to the polls for him. He needs to be the one out there working, and right now he’s not.”

“I’ve heard people say that he’s increasing his presence,” King added. “Let me tell you something — don’t increase it, you better kick it in the ass.”

“J.D. is going to win. There is absolutely no doubt about that,” former U.S. Senate candidate Bernie Moreno said in an email.

The entrepreneur dropped his Senate bid early at the advice of Donald Trump and committed to backing whoever the former president decided to support. Moreno is a longtime donor and well connected in GOP circles. He dismissed out of hand any suggestion of an ‘enthusiasm gap,’ and criticized Ryan’s pitch to independent and disaffected conservatives as creating a “mythical character” at odds with his record.

“J.D. is young, untarnished by the D.C. swamp, and will be an incredibly reliable conservative vote in the Senate,” Moreno wrote. “He will have the resources he needs to make certain Ohio understands the immense contrast between a young, energetic entrepreneur and a tired DC lifer who barely was able to get post offices named.”

“Whatever shortfall he has will be more than made up by either the Senate campaign committee or third-party entities like Mitch McConnell’s group that’s sitting on $150 million right now,” Clegg said.

Clegg specializes in political advertising and insisted it’s normal for campaigns to slow down in the summer and then hit the airwaves after Labor Day.

As for outside spending, those groups are already making their presence felt. GOP senators’ campaign organization, the National Republican Senatorial Committee, is spending $1 million to boost Vance. The NRSC has even begun cutting back in other states to put more money into Ohio, Pennsylvania and North Carolina. Meanwhile the Mitch McConnell-aligned dark money group One Nation is spending $3.8 million attacking Tim Ryan.

Two days prior to Moreno’s email, Vance was just across the sound in Nantucket, raising money with other Senate candidates at a $50,000-a-plate dinner alongside NRSC chair Sen. Rick Scott, R-FL.

It is indeed the season to fundraise in Nantucket or on Martha’s Vineyard https://t.co/OZVa1vF7ny pic.twitter.com/0v37rmG1zO

Vance will likely get another boost among GOP base voters this week, when Florida Gov. Ron DeSantis visits the state as part of a three-state tour backing Republican U.S. Senate candidates.

For his part, Vance insists he’s well positioned to win in November. Speaking this week with Dayton 24/7 Now, he downplayed the difference in fundraising, and like Moreno, he criticized Ryan’s out-of-state donors.

“If you look at Tim Ryan’s money, it’s almost all coming from out of state. Very wealthy donors who are pouring money into the state because they know that I’m going to stand up for working Ohioans and not for national special interests,” Vance said.

“I’m not surprised that those moneyed interests have come after me,” Vance added. “But at the end of the day, they don’t decide who gets to be the U.S. Senator from Ohio, the people do.”

The majority of individual contributions flowing into Vance’s campaign, also from come from out of state. And the single biggest donation in support of his candidacy came from one out-of-state donor in particular — venture capitalist Peter Thiel.

In all, Theil gave $15 million to a super PAC supporting Vance. But after a contentious primary full of multi-millionaire candidates, that PAC finished the quarter with less than $700,000 on hand.

It’s all bit surprising to University of Akron political scientist David Cohen. Heading into the race, Cohen said, one of the biggest questions was whether Ryan could raise enough money — not the author with a national profile.

“Vance has, by all accounts, underwhelmed with his fundraising,” he said.

As for what’s driving the sluggish returns, Cohen offered lackluster poll numbers and the sense that Theil or some other white knight will swoop in to bolster the campaign. A new poll from Emerson College showing Vance hanging onto a narrow lead might help a bit with the former. Then again, it shows double-digit undecideds in the Senate race, and Vance underperforming compared to Gov. Mike DeWine.

More than anything, though, Cohen points to the seeming miscalculation that a Republican running in Ohio would be running downhill.

“I don’t think it’s downhill for him at all,” Cohen said. “I think he made that assumption, that it was going to be a much easier race than it has been. Vance has to turn out his base and that means that he has to get his base enthused, and it doesn’t appear that he’s doing a very good job with that.”

In a sense, Cohen explained, Vance’s strategy of playing to the party’s extremes is more straight forward but potentially risky — in effect, he’s putting all his eggs in one bright red basket. Ryan, meanwhile, has the more complicated task of trying to simultaneously appeal to voters along a much broader spectrum. Although it’s a more difficult approach, it may offer more avenues for him to build a majority.