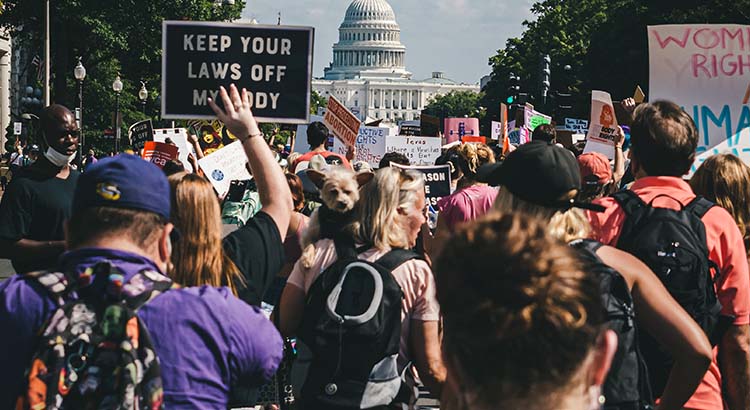 Ever since she was old enough for me to tell her anything, I’ve been telling my daughter that she could grow up to be whatever she wants to be, that no obstacle, big or small, would ever stand in her way.

I’ve told her that she’ll set her own destiny — that she’ll write the story of her life, and that only she can determine the way it turns out. I’d always believed it to be true. And after watching her grow and become the amazing young woman that she is, it’s always seemed like she believed it too.

Then, last Friday, in a ruling that speaks not for the majority of Americans who want abortion to remain safe and legal, but for a tyrannical minority that’s spent decades working toward this moment, *five people, four of them men, all of them accountable to no one, blasted a hole right through that narrative; as they struck down Roe v. Wade, the 1973 decision that provided a constitutional right to abortion, and Planned Parenthood v. Casey, the 1992 ruling that codified that right.

Because fundamental to the belief that you set your own destiny is the freedom to control your own body, to make decisions about how, when, and whether you choose to have a child — if at all.

And when my brave, proudly out child looked at us and told us she feared for her own safety, for her own future, the faces of millions of people nationwide fearing the same thing, looked back at us.

Because if the state can force you to give birth, if it can take away that fundamental control, then it’s entirely possible for the state to take away other freedoms that Americans have taken for granted for generations.

Indeed, in chilling terms, Justice Clarence Thomas opened the door to just such an eventuality, arguing that high court precedents establishing rights for LGBTQ Americans, along with the right to access contraception, now also are fair game.

Thomas wrote that those rulings “were demonstrably erroneous decisions,” once again speaking for a tyrannical minority, not the majorities of Americans who both support access to contraception and equal rights for LGBTQ Americans.

And if that’s the case, are all of the high court’s super-precedents, from Brown v. Board of Education, which desegregated the public schools to Loving v. Virginia, which struck down bans on interracial marriage, now also vulnerable? It’s not hard to conceive of that being the case.

If we’re to follow the logic of Justice Samuel Alito, none of those rights conferred by those historical rulings were specifically enumerated by the slave-owning, landed white men who were conspicuously silent about women when they crafted the young nation’s foundational document.

But through decades of jurisprudence, often at terrible cost, those rights were won. Black Americans and women were granted those core freedoms. In 2015, love won, and those freedoms and protections were granted to LGBTQ Americans.

That march forward has never been perfect. We’re reminded continually that progress cannot be taken for granted. It’s a reality driven home by the civil rights marches of the last two years, and most viscerally by the would-be fascists who tried to topple the 2020 election.

But besides taking away the rights of millions of people, the high court did something just as damaging — it took a torch to its own credibility; it demolished its standing as a guarantor of the protections in the document each justice took an oath to uphold and protect.

Last Saturday, for the first time in generations, Americans woke up in a country demonstrably less free and less equal than it was the day before.

And with the battle over abortion rights now moving to the states, and with my daughter and millions of people who can become pregnant looking to recover the freedoms that rightfully are theirs, they’ll have to do what the generations before them did: They’ll have to fight for them.

And with our collective freedoms, our shared humanity on the line, it’s going to take all of us to wage it.