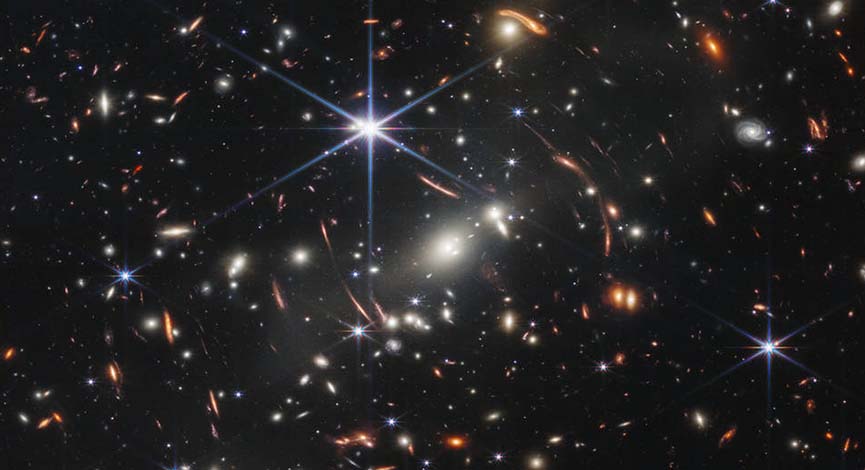 The James Webb Space Telescope produced this image, known as Webb’s First Deep Field, a view of galaxy cluster SMACS 0723 and the deepest and sharpest infrared image of the distant universe to date. It was released July 11, 2022. (NASA)
ShareTweet

So much of our collective experience as a country these days involves division and strife, but this week we rediscovered our capacity for unity and awe, occasioned by a picture.

On Monday, NASA released the first image from the James Webb Space Telescope, a “deep field” photo that captures hundreds of galaxies, each containing roughly 100 million stars and some being so distant in time and space they represent the farthest humans have yet journeyed in cosmological observation.

The image is deeply moving in a universal, inexhaustible way. It’s the kind of effect that is categorically immune to partisanship, absolutely pure of spirit, utterly egalitarian in nature.

On Tuesday — as a yearslong pandemic continued to take on new deadly forms and the House committee investigating the Jan. 6 attack on the U.S. Capitol heard more testimony about a former president’s attempt to violently overthrow an election — NASA released more images from the new telescope, and they were similarly antidotal to terrestrial ills.

What these views have in common is that they are gifts of perspective.

Like the universe itself, that perspective is ever expanding at an ever faster rate. We used to think that all the stars were part of the Milky Way. Then in 1924 the astronomer Edwin Hubble discovered that Andromeda, previously believed to be a nebula, was actually a galaxy quite apart from our own. This was a momentous transformation in perspective. 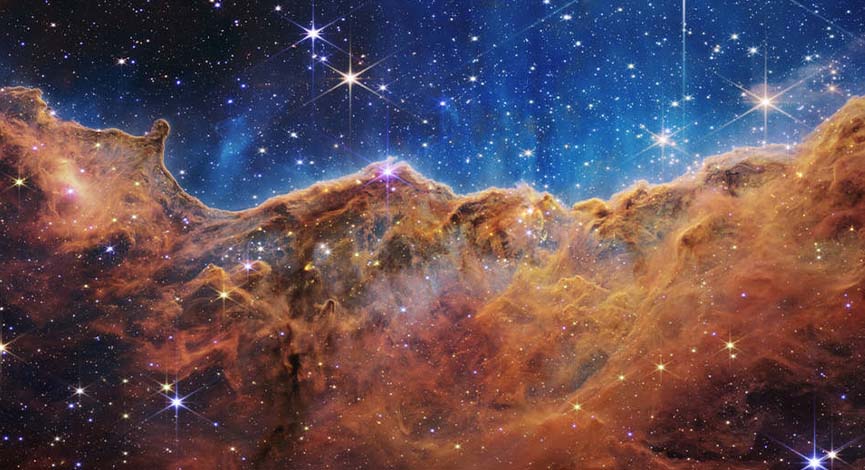 The James Webb Space Telescope produced this image of the edge of a nearby, young, star-forming region called NGC 3324 in the Carina Nebula. Captured in infrared light the image reveals for the first time previously invisible areas of star birth. (NASA)

NASA’s former most powerful space telescope, named for Hubble, took us to previously unimaginable depths of space. It once caught a glimpse of a galaxy in the area of the Big Dipper that is 13.4 billion light years away. The universe is about 13.8 billion years old, so the image showed how the galaxy appeared just 400 million years after the Big Bang. The James Webb telescope will allow us to see even further back in time.

Whereas Hubble, which remains in operation, orbits the Earth at a distance of only about 350 miles, Webb orbits the Sun on the far side of and at a pace that follows the Earth, about a million miles from us. Hubble makes images mostly with an optical view of space, but Webb is designed to view the universe in the infrared wavelengths. This will allow it to look through dust clouds as well as see the most distant visible objects. It will provide more momentous transformations in perspective.

No matter how far into space Webb peers, it and every human technology will only ever be capable of seeing the observable universe — the parts of it that emit light that has had time to reach us, which is only a portion of the universe, because space itself is expanding. Some astrophysicists speculate that our universe is part of a multiverse — there could be many other universes, each with their own laws of physics. There could be infinite universes, and we’ll never see any of them except the one we inhabit.

But there’s plenty to see here. Our universe has something like one hundred billion trillion stars, and naturally the big question about that big number is how many of those stars support life. One estimate is that a galaxy like the Milky Way probably has four planets that could sustain technologically advanced civilizations. There are 2 trillion galaxies in the universe. That could add up to lots of intelligent life. When you look at Webb’s deep field image, you’re almost certainly looking at the homes of living counterparts who very well could be marveling at their own new images that reveal to them a place we know as the Milky Way.

The import of the Webb pictures supersedes any message from any pastor or politician or even the rational discourse of one’s own mind in that, by presenting the actual features and structures of unfathomably faraway worlds, it indicates forces that are stupendously greater than earthbound interests, that to engage with a universe so resistant to human understanding demands promotion of the spirit over the brain, and that no matter how vast and inscrutable the cosmos proves to be, it is us, and we are it. To feel insignificant or infinitesimal before the universe is to forget that it produced us, and we are no less than its conscious agent, its sentient appendage, its moral organ, and in exact proportion to its significance and vastness so too are we significant and vast.

We are navigating a fraught election season. Democratic institutions are under attack. The Supreme Court is rescinding rights. Grade school classrooms are routinely scenes of slaughter. We have urgent earthly matters to attend to.

But as we press on with the business of improving our lives on this planet, the work will benefit from the perspective afforded by the James Webb Space Telescope and the engineers and scientists who created and operate it. We all, regardless of belief or background, will inevitably be better people when we recognize, in the most profound sense, who we really are.