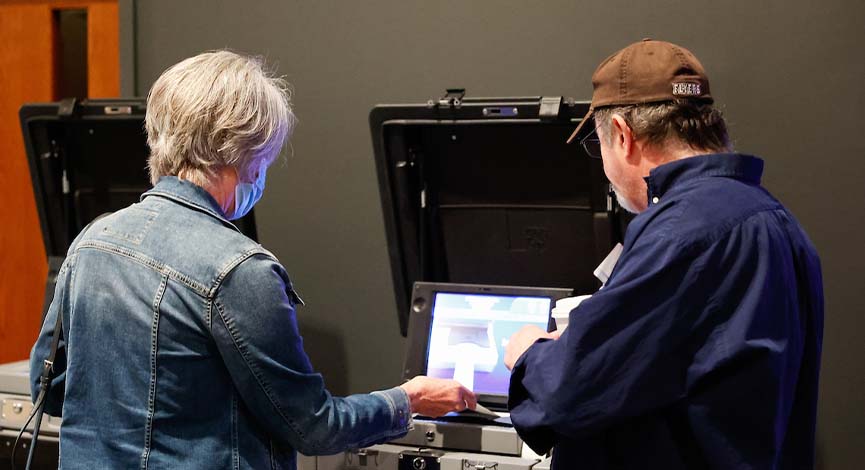 A voter feeds her ballot from the ballot marker into the ballot counter helped by a first time poll worker who asked not to be identified during the Ohio primary election, May 3, 2022, at the Grace Life Nazarene Church voting location, New Albany, Ohio. (Photo by Graham Stokes for the Ohio Capital Journal.)
ShareTweet

The Ohio Supreme Court unanimously sided with Secretary of State Frank LaRose in denying a candidate a place on the August primary ballot, and refusing more time for candidates to file for the primary.

The case arose from a Lorain County Board of Elections decision not to certify Erik Jones as a candidate for the Republican Party State Central Committee.

Confusion has riddled the election process due to a chaotic redistricting process, that is technically still ongoing.

The Ohio Redistricting Commission has yet to come up with a constitutional legislative map, having had five different versions rejected by the state supreme court.

With no viable map in contention, a federal court ordered that a map passed by the commission in February be used for the August primary and the November general election, since it was ordered to be put in the county boards of elections systems by LaRose. The federal court’s order came despite the fact that the map had been turned down by the state supreme court twice, and another time after the map had been slightly tweaked by the legislative mapdrawers.

The May 3 primary happened amid the chaos, without the Statehouse district races or central committee candidates on the ballot, forcing a second primary, set to happen Aug. 2.

When the federal court made the decision one which map to use, LaRose argued it did not “alter the partisan candidate filing deadlines for the primary election,” directing board of elections to continue with the deadline at Feb. 2.

Jones filed his candidacy on April 27 to appear on the August primary ballot, but wasn’t told until June 2 that his candidacy wasn’t certified because the filing deadline had passed.

In a different but related case, the Supreme Court ordered the Secretary of State’s office to accept the candidacy of six specific individuals, because it found the 90-day deadline had not passed before the candidates filed for the August primary.

The court said Jones indeed filed more than 90 days before the August primary date, but because he filed his case with the court a month after the board of elections made their decision, he did not act with the “utmost diligence,” as is needed in election cases.

Jones said he attempted to seek a solution directly from the Secretary of State’s office and obtain legal counsel. The court said he presented no evidence of either of these claims.

“We hold that Jones has failed to establish a valid excuse for the delay,” the court ruled.

With early voting already underway and the election weeks away, the court said the delay in Jones’ filing “made it impossible for us to decide the case earlier.”