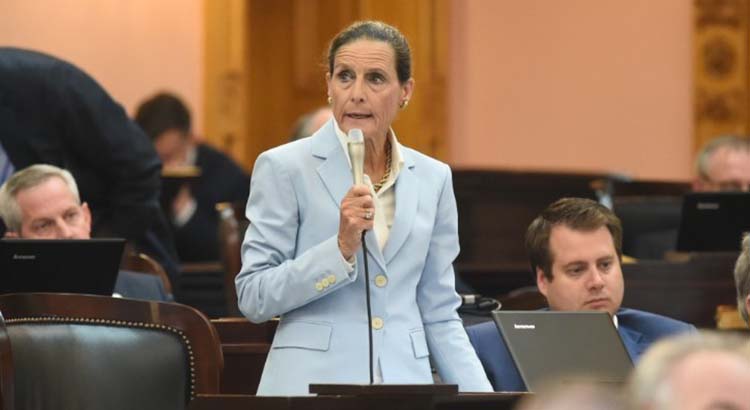 The sponsor of legislation that would ban nearly all abortions in Ohio said babies conceived via rape or incest still have a right to life.

Rep. Jean Schmidt, a Cincinnati area Republican, said on conservative talk radio earlier this week that her bill is likely to pass in the legislative session after the November elections.

“I do believe we have the votes in both chambers, and we have the full support of the governor on this bill,” she said.

The bill also creates a new misdemeanor crime of “promoting” abortion, for those who make, sell or distribute drugs or devices used to perform illegal abortions. Schmidt said in the interview this could be used to target some of the companies (including in Ohio) that have announced they will cover costs of employee travel to seek an abortion as needed.

When pressed by 700WLW host Bill Cunningham on whether Ohio should pass legislation banning birth control pills or condoms, she said she’ll listen to both sides of the debate.

House Bill 598, which Schmidt introduced, would ban most abortion in Ohio. Current Ohio law allows for abortions up to six weeks after a woman’s last period. The proposed legislation does not provide exceptions for pregnancies conceived by rape or incest.

Providing any abortion under the bill could lead to a fourth degree felony charge. The law allows the accused to mount a defense, however, if they only did so to save the life of the mother. That physician would need to provide written certification of the woman’s medical need along with that of another physician from a separate practice.

Likewise, the legislation requires at least two physicians present during the abortion: one to perform the abortion in the manner that provides the “best opportunity for the unborn child to survive,” and another to care for the fetus.

Schmidt drew national attention in April when she referred to a hypothetical 13-year-old’s pregnancy spawned by rape as an “opportunity.” Her recent comments, however, come after the U.S. Supreme Court last week overturned a landmark 1973 ruling that established a constitutional right to abortion. That decision wiped out the federal protection and returned control over abortion to the states.

A spokesman for Gov. Mike DeWine did not dispute Schmidt’s characterization of DeWine’s support for her bill, and noted that the governor has previously expressed support for conceptually similar legislation. Senate President Matt Huffman, R-Lima, said this week he expects an abortion ban of some sort to pass in late 2022.

Schmidt’s remarks indicate no signs of a softened position, and a sense of opportunity after the removal of a major roadblock to restrictive abortion laws. They, and Cunningham’s questions, have been edited here for length and clarity.

Cunningham: What about rape and incest [as a potential exception to a ban on abortion]?

Schmidt: “Rape and incest is an ugly, ugly, ugly act of violence, and that woman is truly harmed and scarred, and those wounds will never go away and we need to make sure that she has all of the love and help and support. But to end the pregnancy of the child is not going to erase those wounds or those scars. That child still has the right to life.”

So, as a leader in the House of Representatives, you would not vote to ban birth control pills in Ohio?

“You know, that’s another issue for another day, and I’m going to have to listen to both sides of that debate. But right now, what I’m really concerned about is the life of the child, and the fact that we have the opportunity in Ohio to protect it from its conception until its natural death. That’s what I’m most excited about.”

Would you vote against gay marriage in Ohio?

“You know, Bill, that’s another decision for another day. The issue right now is abortion, and that’s one I want to make sure sees its end in Ohio in a very quick fashion.”

[Cunningham for 90 seconds talks about various alternatives to surgical abortion, ending in a statement that companies are starting to “pay” their employees $4,000 to travel to more liberal states that allow them to obtain an abortion and other “workarounds”.]

Do you know what I’m saying?

“If those companies want to do that, they better make sure that they’re complying with the laws of the states that allow them to do that. Because in House Bill 598, it says anybody that promotes an abortion will be under the issues of criminal activity. They might have a problem with sending somebody outside the state with a paycheck in hand, because that would be – in some legal eyes – promoting abortion.”