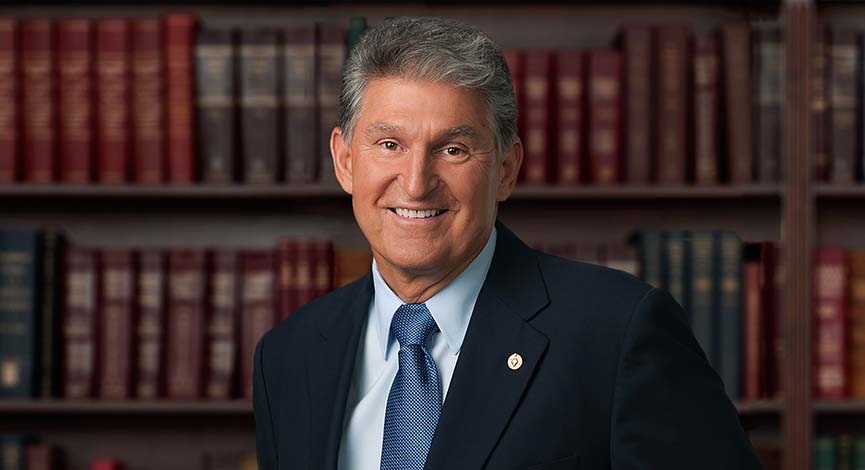 President Joe Biden in a statement on Wednesday night offered his support as well, saying the deal will fight inflation and lower costs for American families.

Using a budget process called reconciliation, a bill that draws the support of all 50 Democratic members of the U.S. Senate, with a tie-breaking vote by the vice president, cannot be blocked by Republicans using the filibuster.

“After many months of negotiations, we have finalized legislative text that will invest approximately $300 billion in Deficit Reduction and $369.75 billion in Energy Security and Climate Change programs over the next ten years,” Manchin and Schumer said in a joint statement.

“The investments will be fully paid for by closing tax loopholes on wealthy individuals and corporations. In addition, the expanded Affordable Care Act program will be extended for three years, through 2025,” they continued.

The announcement marked a big step forward for a major package after negotiations appeared to break down this month as Manchin objected to federal spending potentially fueling inflation, though he maintained he was still open to a deal.

The title of the package, which Democrats will try to advance through the Senate next week using the complex budget reconciliation process, will be the Inflation Reduction Act of 2022.

A summary of the bill says increasing the corporate minimum tax to 15% will bring in $313 billion and that changes allowing Medicare to negotiate prescription drug prices will yield $288 billion.

Enhanced tax enforcement from the Internal Revenue Service is expected to raise $124 billion in revenue for the federal government, while addressing the carried interest loophole will bring in $14 billion.

That additional funding will more than offset the spending proposed in the package.

Democrats’ estimates show that $369 billion would go towards energy and climate change while extending subsidies for the Affordable Care Act will cost $64 billion.

That would mean more than $300 billion in deficit reduction, according to the summary.

“The Inflation Reduction Act of 2022 will make a historic down payment on deficit reduction to fight inflation, invest in domestic energy production and manufacturing, and reduce carbon emissions by roughly 40 percent by 2030,” Schumer and Manchin said.

“The bill will finally allow Medicare to negotiate for prescription drugs and lower health care costs for millions of Americans.”

In a statement, Biden said he’d spoken with Schumer and Manchin and offered his support.

“This is the action the American people have been waiting for,” Biden said. “This addresses the problems of today — high health care costs and overall inflation — as well as investments in our energy security for the future.”

“If enacted, this legislation will be historic,” he added. “I urge the Senate to move on this bill as soon as possible, and for the House to follow as well.”

The statement did not include details of how the $370 billion for energy and climate programs would be spent or where the 40% emissions reduction would come from.

In his own statement, Manchin, who has financial ties to West Virginia’s coal industry, took a familiar position in opposition to those in his party who favor bolder climate action and said the bill would not seek to eliminate fossil fuels.

“We must stop pretending that there is only one way to combat global climate change or achieve American energy independence,” he said.

Rising energy costs — and relative scarcity in European countries more dependent on Russian imports — showed that energy reliability and affordability must be balanced with climate impacts, he said.

The bill includes “strategic and historic investments” in decarbonization that will help U.S. energy be cheaper, cleaner and more reliable, he said.

The agreement “invests in the technologies needed for all fuel types — from hydrogen, nuclear, renewables, fossil fuels and energy storage — to be produced and used in the cleanest way possible,” he said.

“[T]his bill does not arbitrarily shut off our abundant fossil fuels. It invests heavily in technologies to help us reduce our domestic methane and carbon emissions and also helps decarbonize around the world as we displace dirtier products.”

While details were scarce Wednesday, progressive and environmental groups praised the dollar figure.

“For months, progressives have advocated for a reconciliation bill on policies with consensus across the Democratic Caucus: climate, health care and tax fairness,” the Congressional Progressive Caucus tweeted. “We’ll need to evaluate the details, but it’s promising a deal to deliver on those issues might finally be in reach.”

“With $369 billion for climate and energy provisions, this bill has the potential to be the single largest investment in clean energy in American history,” the climate group Evergreen Action said in a statement.

The agreement calls for separate legislation this fall to update federal permitting.

Members of both parties have complained that federal requirements slow construction, including of energy and transmission projects.

But environmental advocates say requirements under the National Environmental Policy Act and the Endangered Species Act provide essential protections and shouldn’t be undercut.

The bill summary said the permitting reforms would help lower energy costs and would contribute to emissions reductions.