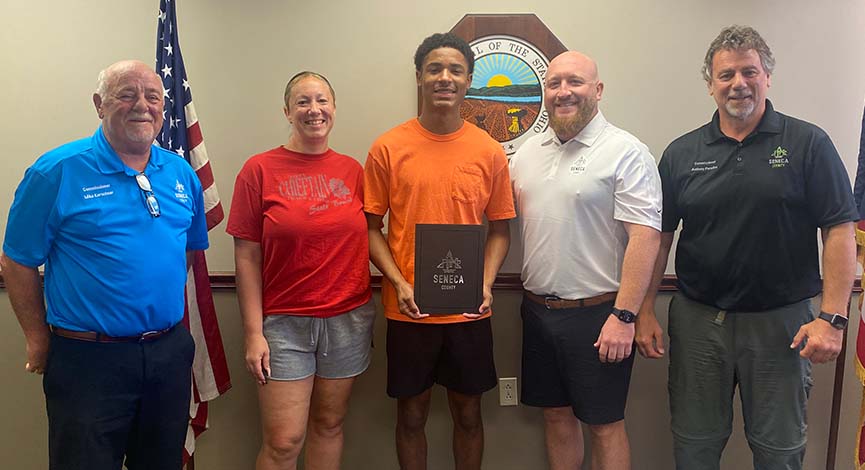 The Seneca County Commissioners pose for a photo with triple state track champion Sherron Jones (center), a Hopewell-Loudon graduate, and his mother Andrea Fuller (second from left) during a board session Thursday, July 28, 2022. (Contributed Photo)
ShareTweet

Tiffin, Ohio — The Seneca County Board of Commissioners presented a proclamation to a triple state track champion during Thursday morning’s session.

Sherron Jones, a Hopewell-Loudon graduate, was honored for winning the 100-, 200- and 400-meter races at the state track meet this year.

The commissioners spoke with Jones and his mother, Andrea Fuller, about his successful athletic career and his future. Jones is to attend the University of Findlay and he will continue running track.

“We are so proud of you,” Commissioner Anthony Paradiso said to Jones.

In other action, the board met with newly appointed Tiffin Mayor Dawn Iannantuono.

The commissioners each expressed their congratulations to Iannantuono, and she spoke briefly about the future. 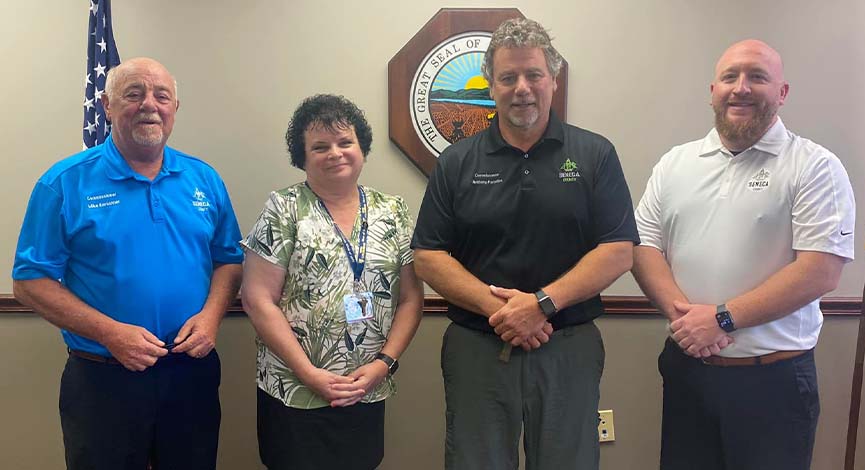 Iannauntuono said she looks forward to working closely with the commissioners for the betterment of Seneca County.

In March, county administrative staff presented a list of about 35 prioritized capital project requests to the commissioners. The list was created after County Administrator Stacy Wilson and County Building & Grounds Maintenance Supervisor John Logsdon presented 114 project requests to the commissioners earlier in the year. Of the 114, 68 had price estimates equaling more than $15 million.

The board previously agreed to move forward with the top 10 projects on the list, including the top priority, the construction of a new Agricultural Services Building.

The commissioners also received an update from County Administrator Stacy Wilson on architectural work being completed on a new EMS station. The commissioners previously set aside $750,000 for the first of potentially four stations that would be located strategically around the county as officials work toward a 24/7/365 ambulance service with paid staff that is supplemented by volunteers. The first station is likely to be located on the east side of the county.

In March the board agreed on an option to purchase about 3 acres of land on US 224 in Bloom Township. The option allowed the commissioners 120 days to decide if they wanted to acquire the property. The price of the portion of the parcel is about $52,500. According to the Seneca County Auditor’s website, the portion of the parcel that could be purchased is located near 9428 E. US 224. This site is the likely location for the first EMS station.

On Thursday, the board entered an executive session to discuss this option and ultimately directed the Seneca County Prosecutor’s Office to draft paperwork to move forward with a purchase agreement for the property that is to be considered next week.

The commissioners are to consider allocating funds for three identical EMS buildings once architects finalize cost estimates and drawings in the coming weeks.

The board also discussed the possible construction of a new public safety building, which would likely be south of Tiffin near the Seneca County Sheriff’s Office.

Most of the funding for these projects was freed up via solid fiscal management and the influx of federal funding through programs such as the American Rescue Plan Act. Guidance for ARPA funding allows local governments to use up to $10 million for general governmental services. The commissioners hope these investments in non-recurring, capital projects, will help lower the county’s economic footprint and will make buildings more efficient, and thus less expensive to operate.