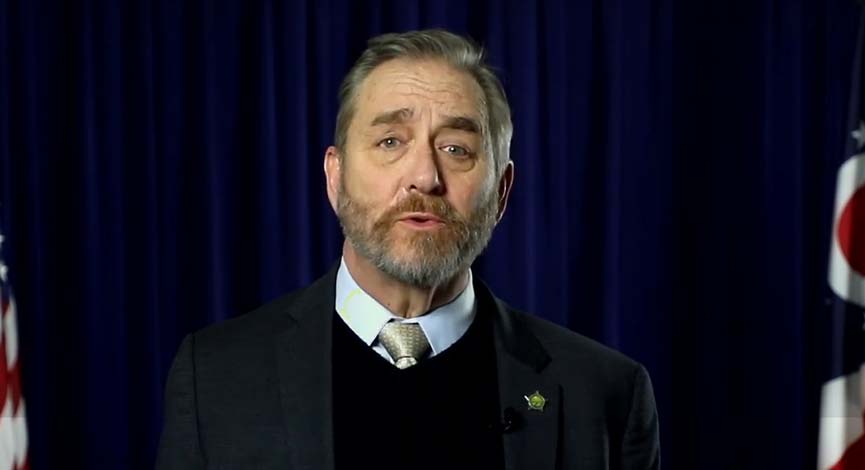 Now that one of the most restrictive abortion laws in the United States is in effect in Ohio, some of the state’s Republican leaders don’t seem to want to discuss it.

Consider Ohio Attorney General Dave Yost. He rushed to court on June 24 just after Roe v Wade was overturned to implement the Ohio law, which was signed by Gov. Mike DeWine in 2019.

Then, earlier this month, The Indianapolis Star reported that a 10-year-old rape victim was forced to go to Indiana to terminate her pregnancy. In the wake of the report, Yost went on Fox News to raise spurious doubts about the rape victim’s existence. Those doubts disintegrated two days later, when Columbus Police arrested a 27-year-old man they say confessed to raping the child at least twice.

And since the arrest, Yost has struggled to support his claim on Fox News that under the Ohio law, the 10-year-old could still have gotten an abortion in Ohio.

By late last week, Yost and his staff not only were still refusing to say how old a girl — or a teen, or a woman — needs to be before the law forces her to have her rapist’s baby. His communications director wouldn’t even say whether the attorney general supports the abortion restrictions he acted with such alacrity to enact less than a month ago.

The Ohio law forbids most abortions about six weeks after a woman becomes pregnant. It makes no exceptions for cases of rape or incest.

Yost on July 11 created much confusion when he told Fox host Jesse Watters he was skeptical about the Ohio 10-year-old’s existence and that it was a “hoax” to say she was forced to leave the state for an abortion, if she were indeed real.

“Ohio’s heartbeat law has a medical emergency exception,” Yost told Watters. “It’s broader than just the life of the mother. This young girl — if she exists and if this horrible thing actually happened to her, it breaks my heart to think about it — she did not have to leave Ohio to find treatment.”

Was he saying that a pregnancy by a girl so young would automatically make her eligible for exceptions because it threatened to kill her or cause “substantial and irreversible impairment of a major bodily function?”

In an analysis, the Legislative Service Commission said the law makes no age-based exceptions.

“Ohio’s abortion prohibition applies regardless of the circumstances of conception or the age of the mother,” it said, according to the Washington Post.

After the girl’s existence was confirmed, Yost’s office claimed that he hadn’t told the Fox audience that 10-year-olds are automatically exempt under the Ohio law.

“Yost’s office emphasized that his assessment did not relate to age requirements, but to whether the pregnancy would be considered a medical emergency,” The Columbus Dispatch reported on Thursday.

However, two OB-GYNs said that from a medical standpoint, there’s nothing that would make 10-year-olds as a group automatically eligible for abortion exceptions under the Ohio law. Such pregnancies are risky, they told the Capital Journal, but so are a lot of others.

And besides, such a claim doesn’t seem to make any sense in the context of Yost’s appearance on Fox. Was he saying he was familiar with the 10-year-old’s individual health status even as he continued to doubt her existence?

Bethany McCorkle, Yost’s communications director, responded by pointing to an “explainer” her office issued on Thursday. It discussed exceptions in the law, but it sheds no light on whether a 10-year-old would automatically be eligible for them or how Yost could have known about the individual circumstances of a girl whom he said might not be real.

For doctors, when and whether the law permits abortions isn’t just an academic exercise. If they violate it, they can be charged with felonies, be sued in civil court and subject to professional sanctions.

In his position as attorney general, there are substantial steps Yost could take to clear up the confusion he helped create in his Fox News appearance — and by the law more generally, said Maria Phillis, a Northeast Ohio OB-GYN.

He “could issue guidance to the state and its agencies and even the general public to say, ‘Hey, this is actually how this law should be applied,’” she told the Capital Journal last week. “So if he thinks just being 10 years old is a sufficient medical necessity to require an abortion, he can make that statement and make that clarifying guidance.”

She added, “He’s the attorney general. He can say, ‘We don’t think we should prosecute anyone in an abortion of a 10-year-old.’ He can say, ‘I don’t think we should prosecute any physician for making a decision under this law.’ But he’s not doing that. He seems to be kind of trying to have it both ways. And in some ways it seems like he’s trying to gaslight Ohio physicians and patients and constituents, honestly, about the impacts of this law.”

“When have we ever issued guidance after a Supreme Court ruling?” McCorkle responded in an email. “The (Ohio Department of Health) is statutorily required to write rules; I think the question is better directed to them.”

Of course, any guidance from Yost in this case would be in regard to the Ohio law, Senate Bill 23, and not the U.S. Supreme Court decision in Dobbs v Jackson Women’s Health Organization, which cleared the way for enforcement of the Ohio law.

When that was pointed out, McCorkle responded by writing, “Please share with me where we are required to put out guidance on certain laws.”

He added, “While that section also provides examples of conditions that constitute a serious risk of the substantial and irreversible impairment of a major bodily function, the physician should be using their good-faith medical judgment, based on the facts known to the physician at that time, as to whether other conditions or specific facts constitute a medical emergency.”

But when asked if Yost had given his department any guidance on how to follow S.B. 23, he replied that the health department “considers all communications with the attorney general’s office to be privileged.”

As confusion and controversy grow around Ohio’s abortion restrictions, the state’s Republican leaders aren’t answering some difficult questions that it raises. Despite being asked several times, aides to DeWine, a former attorney general, and Yost haven’t said how old their bosses think a person has to be before the new law requires them to have their rapists’ babies — or what they personally think about the issue.

His previous actions and statements seem to indicate that he at least used to.

“Sometimes, the evolution of the law requires bold steps,” he said in a statement just after the law passed in 2019. “In the last 46 years, the practice of medicine has changed. Science has changed. Even the point of viability has changed. Only the law has lagged behind. This law provides a stable, objective standard to guide the courts.”

Less than an hour after the U.S. Supreme Court overturned Roe v Wade on June 24, Yost took to Twitter to announce that his office had already filed a motion to enact the Ohio law.

“BREAKING: We filed a motion in federal court moments ago to dissolve the injunction against Ohio’s Heartbeat Law, which had been based on the the now-overruled precedents of Roe and Casey,” it said.

And last week, as he attempted to sow doubts about the existence of the Ohio child who was raped, Yost slammed Caitlin Bernard, the Indiana doctor who cared for the child, to The Dispatch, calling her someone “who has an obvious ax to grind.”

Bernard’s ax, apparently, was speaking out against the end of Roe v Wade by arguing that it can compromise patient care.

But McCorkle, Yost’s spokeswoman, wouldn’t answer directly last week when asked whether Yost supports Ohio’s new abortion restrictions. She only said, “The job of the Attorney General is to enforce the laws that exist.”

Phillis, the Ohio OB-GYN, said things have been difficult working through the coronavirus pandemic “in the midst of laws getting passed trying to keep us from taking good care of our patients and then getting called an activist for speaking out and saying this is going to be a problem for our patients and here’s why… I mean, come on. What is Dave Yost doing to take care of any of our patients? That’s what I want to know.”