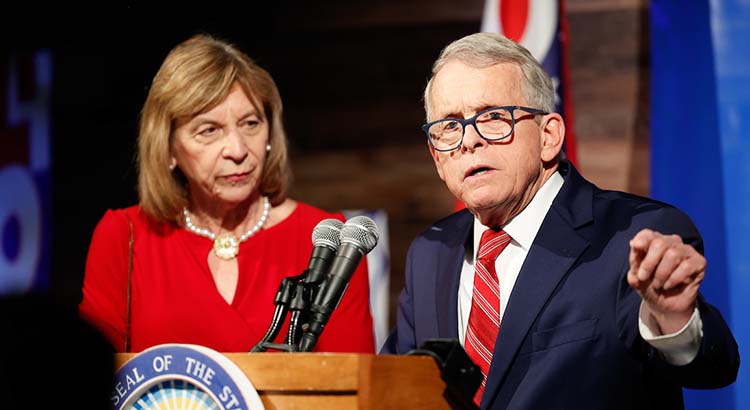 Gov. Mike DeWine spends a lot of time jawing about his concern for protecting the “most vulnerable” Ohioans whenever he signs a draconian law attacking the bodily autonomy of others.

But as we learned this week, a 10-year-old Ohio rape victim was forced to travel to Indiana for an abortion after the U.S. Supreme Court overturned national abortion rights, and within hours Ohio Attorney General Dave Yost had a federal court put Ohio’s six-week abortion ban signed by DeWine in 2019 into effect.

From the Indianapolis Star:

On Monday three days after the Supreme Court issued its groundbreaking decision to overturn Roe v. Wade, Dr. Caitlin Bernard, an Indianapolis obstetrician-gynecologist, took a call from a colleague, a child abuse doctor in Ohio.

Hours after the Supreme Court action, the Buckeye state had outlawed any abortion after six weeks. Now this doctor had a 10-year-old patient in the office who was six weeks and three days pregnant.

Though Indiana lawmakers are poised to further restrict or ban abortion in mere weeks with a special session July 25, for now, the procedure still is legal there. And so, the Star reported, the girl soon was on her way to Indiana to Bernard’s care.

Asked Wednesday about the law he signed preventing this 10-year-old rape victim from having a choice over her pregnancy in Ohio, DeWine could only stutter and stammer through a political hack non-answer:

“Yeah, first of all, I have no more information than you do or anybody does. Reading in the in the paper, it came came as you know, from a story out of out of Indiana from from a doctor over there. This is a horrible, horrible tragedy, you know, for a 10-year-old to be assaulted, 10-year-old to be raped, you know, as a father and grandfather, it just it’s just gut-wrenching to even even even think about it. I assume that the doctor has reported this. I assume that if she was treated at an emergency room, you know, these are all mandatory reporters. So I’m assuming that this has been referred to children’s services, I assume has also been referred to local whatever the local law enforcement agency is. We have out there a obviously a rapist. We have someone who is dangerous and we have someone who should be picked up and locked up forever. And again, I don’t not knowing all the facts of the case, I’m just assuming that that process has has in fact, has in fact, been been followed. [sic]”

Everyone knows that the rape of a 10-year-old is horrible. That’s not the question.

The question is for DeWine to explain why he thinks he is justified in creating law to force child rape victims to carry pregnancies from their rapists. On that subject, DeWine’s silence rang loud.

DeWine would inflict the emotional and physical violence of forced birth-giving on child rape victims, but won’t take responsibility for his own actions.

This is a most disgusting form of cowardice.

Either DeWine has the courage of his convictions and explains why children must undergo this suffering he’s causing; or he’s a coward.

From his answer, it’s apparent he’s so unconcerned — while this has made national and international news all week — he hasn’t bothered to seek out the facts of the case.

Compare his current posture to the rhetoric DeWine deployed when he signed the law that caused this situation:

“The essential function of government is to protect the most vulnerable among us, those who don’t have a voice,” DeWine said.

If a 10-year-old rape victim does not rank among Ohio’s most vulnerable, I shudder to imagine DeWine’s conception of vulnerability.

This is just the beginning. This was one example that came within days of the Supreme Court’s ruling and the enactment of Ohio Republicans’ law.

Over the coming years, there will be many more. We will report on each story we can, and they will all be heartbreaking to read, I’m sure, and devastating to everyday Ohioans’ lives.

This is what happens when long-standing freedoms are ripped away from Americans by extremist politicians and politically motivated, activist courts.

This is what happens when politicians choose to be blind to the nuances and complexity of life, and instead stake out radical, absolutist positions, and then give those positions the power of law.

Ohio Republicans are planning to move legislation next that will ban nearly all abortions, again with no exceptions for rape or incest.

The sponsor says she has the votes in the General Assembly as well as the “full support” of DeWine.

State Rep. Jean Schmidt doesn’t know yet, she said, whether they will make this new, even more extreme law before or after the November General Election. She’s called forced pregnancy for rape victims “an opportunity.”

Ohio Republicans and Mike DeWine may be fine with making our state an example of heartless cruelty before the eyes of the nation and the world.

I think it’s sick and monstrous.

But that’s the law they made and threaten to make worse, so they don’t get to shirk responsibility and accountability for their actions.

Each heartbreaking story of suffering and pain falls squarely on their heads.