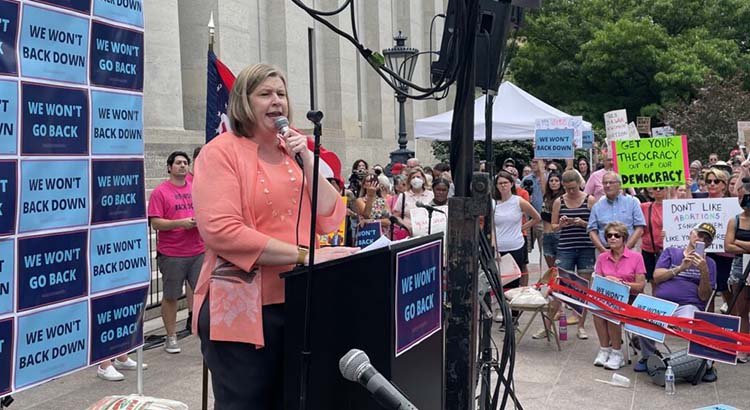 Democratic gubernatorial nominee Nan Whaley is calling for a constitutional amendment protecting abortion access in Ohio. But that won’t happen until next year at the earliest, and Republican lawmakers are gearing up to effectively ban abortion outright by the end of the year.

In a press conference Wednesday, Whaley argued the majority of Ohioans want access to procedure.

“It’s time for voters to fight back. If they’re going to take a right away from women by banning abortion, we’re going to take it directly to the people and say enough is enough,” Whaley said.

Polling from Suffolk University released earlier this month determined 53% of Ohioans want to protect abortion rights. And that share is relatively consistent going back to 2020 and 2019.

Despite what appears to be a slight electoral advantage in public opinion, in the short term Whaley and others face an even more insurmountable obstacle than Republican Statehouse supermajorities — the calendar.

Under Ohio law, signatures must be turned in 125 days prior to the election, which for November’s election would be next Wednesday, July 6. Even if amendment backers had snapped into action immediately, Whaley acknowledged, completing the process in time would be impossible.

Instead, she promised to lead the effort to get the question on the ballot once she’s elected.

“I think that having a Democratic governor that is a pro-choice governor will make this a much easier path for us to get it to the ballot,” Whaley said. “We need a leader. And I’m saying that I will use my leadership as governor to make this happen.”

While Whaley and others make plans for 2023 or 2024, Republicans are laying the groundwork for a more rapid response. Senate President Matt Huffman’s spokesman said legislation banning nearly all abortions with limited exceptions could gain approval by the end of the year.

“The Senate will conduct a detailed policy analysis of the Supreme Court Opinion to determine the path forward for additional legislation which will work through the committee process toward the end of the year,” spokesman John Fortney wrote in a statement.

In a rear-guard effort, meanwhile, a group of Ohio abortion providers are asking the state supreme court to declare the state’s six-week abortion ban unconstitutional. That measure, put on hold by a federal court three years ago, took effect Friday shortly after the Dobbs decision came down.

The petitioners argue Ohio’s constitution already provides protection for abortion rights, and they cite decisions in which the court recognized rights to “privacy, bodily autonomy and freedom of choice in healthcare.” In an ironic turn, they cite a recent amendment championed by conservatives which was meant to undermine the health insurance mandates in the Affordable Care Act.

“The Health Care Freedom Amendment further bolsters the Ohio Constitution’s strong emphasis on protection of liberty and personal autonomy, and reinforces that these protections extend to Ohioans’ right to make decisions about their own bodies — including the fundamental right to make a decision as private and central to a person’s bodily integrity as the decision to have an abortion,” they write.

Organizers for an eventual amendment could see the goalposts move before they begin their work. Right now, getting a constitutional amendment on the ballot requires about half a million signatures, but that number is tied to the total votes cast in the most recent gubernatorial election. If abortion proves to be an animating issue for voters this November, turnout could be relatively high.