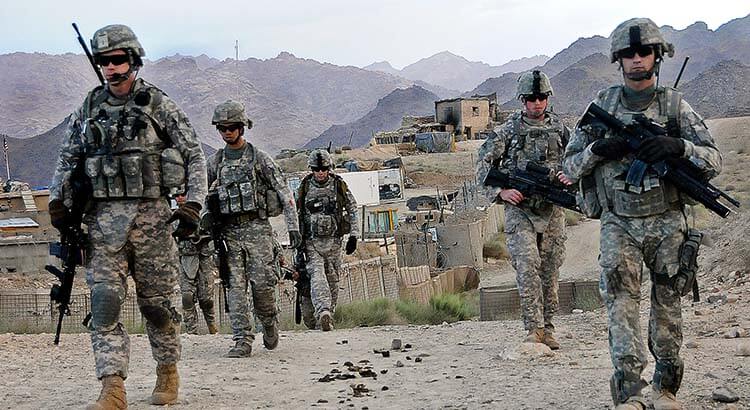 U.S. soldiers deployed to bases in Afghanistan and Iraq often lived and worked alongside large pits where batteries, plastics, rubber, chemicals and other garbage would be lit on fire with jet fuel.

The legacy of those burn pits followed thousands of military members back to the United States, where they have suffered from cancer, neurological disorders and numerous other illnesses.

On Thursday, the U.S. Senate, in an overwhelming 84-14 bipartisan vote, agreed to expand health care and benefits those veterans will receive, in long-sought, sweeping legislation brokered by Montana Sen. Jon Tester and Kansas Sen. Jerry Moran.

“Over the last two decades, an estimated 3.5 million service members were exposed to dangerous chemicals,” Senate Majority Leader Chuck Schumer, a New York Democrat, said this week. “After returning home, many veterans developed terrible diseases because of their exposure to these toxic waste dumps. But even so, nearly 80% of all disability claims related to burn pits have been denied by the Veterans’ Administration.”

The Department of Veterans Affairs has provided care to some veterans, but many have been asked to prove their illnesses were connected to their military service in order to qualify for health care and other benefits.

Working from a garage

Veterans and surviving family members began traveling to Washington, D.C., often at their own expense to ask Congress to do something, anything to help. Along the way, veterans service organizations and advocates got the attention of Jon Stewart, a long-time advocate for 9/11 first responders and a celebrity comedian.

Standing feet from the U.S. Capitol last week, Stewart lauded several veterans service organizations and their leaders, including Rosie Lopez Torres, co-founder and executive director of Burn Pits 360, for working together over years to get the legislation on Congress’ to-do list.

“Rosie, from her garage, out of the necessity of bankruptcy and despair, brought all this together,” Stewart said. “I’m just honored.”

Torres founded the non-profit organization alongside her husband, Army Captain Le Roy Torres, after they experienced “delay, denial of benefits and ineffective treatment from his physician” for constrictive bronchiolitis and toxic brain injury.

Torres said she, veterans and military families began walking the halls of Congress more than a decade ago, trying to get lawmakers to change the system.

“We had one thing in common, the government was putting up this tactic of delay and deny. Year after year we walked with these families,” she said. “So we thought, let’s pass a bill for a registry. We got the bill passed for a registry, but obviously that wasn’t enough.”

Veterans and their families, not sure how to get health care or benefits, often called her non-profit “asking for help, begging for help.”

“We felt alone in the fight many times,” Torres said.

Their push for health care and benefits for veterans exposed to burn pits garnered increasing levels of support among U.S. lawmakers over the years, culminating in the  Senate vote Thursday, where 84 senators voted to approve a significant expansion of VA benefits.

North Carolina’s Tillis said in a statement he voted against the bill out of concerns the VA “does not have the capacity to properly implement” the package.

“This legislation will have adverse operational and administrative impacts, and I remain concerned that it will result in increased wait times, delays in receiving care, and a substantial increase in the claims backlog,” Tillis said. “I fully expect that in the coming years, Congress will be forced to make substantial changes to account for these unintended consequences.”

Tillis was also frustrated senators weren’t able to agree on an amendment process.

The legislation was ushered through the Senate by the bipartisan duo of Tester, a Democrat, and Moran, a Republican.

Tester, chairman of the Veterans’ Affairs Committee, said Thursday the vote on the bill would give the Senate the chance to make history.

“Generations after generations of Americans have gone to war, backed by a promise that we made to them when they signed up that we would care for them when they got home,” Tester said. “Unfortunately, that didn’t happen in the case of toxic exposure. We failed them.”

The country so far has been capable of recognizing the physical wounds caused by war, Tester said. And veterans health care officials have been taking steps to address the mental health impacts of sending soldiers to war, he continued.

“But we haven’t been recognizing the toxic wounds of war and that will end today with the passage of this bill,” Tester said.

Moran, the top Republican on the Senate Veterans’ Affairs Committee, said during the final minutes of floor debate that the bill “is the most comprehensive toxic exposure package the Senate has ever delivered to veterans in our country.”

Moran also defended the $278.5 billion price tag over the next decade, noting “the cost of war is not fully paid when the war is over.”

“We make a decision when we send those service men and women to war that we’re going to do what we said we were going to do and care for them,” Moran said.

The legislation, named for deceased Sergeant First Class Heath Robinson of the Ohio National Guard, would expand eligibility for VA health care to more than 3.5 million veterans exposed to burn pits since 9/11.

It would add 23 illnesses to the list of toxic-exposure-related ailments presumed to be connected to military service, ending the need for veterans with those conditions to try to prove to the VA their illnesses were linked to their deployments.

The package would direct more resources to VA health care centers, employees and claims processing as well as federal research on toxic exposure.

The measure would also expand presumptions for veterans exposed to Agent Orange, a chemical the U.S. military used during the Vietnam War. American Samoa, Cambodia, Guam, Johnston Atoll, Laos and Thailand would all be added to the list of locations where veterans are presumed to have been exposed to the chemical.

Biden has repeatedly spoken out against the use of burn pits, often blaming them for the death of his son Beau, though he said during his State of the Union address this year he couldn’t know for sure.

“They come home — many of the world’s fittest and best trained warriors in the world — never the same: headaches, numbness, dizziness, a cancer that would put them in a flag-draped coffin,” Biden said.

“One of those soldiers was my son, Major Beau Biden. I don’t know for sure if the burn pit that he lived near, that his hooch was near in Iraq and earlier than that in Kosovo, is the cause of his brain cancer and the disease of so many other troops. But I’m committed to find out everything we can.”

Congress has restricted the U.S. military’s use of burn pits over the years.

In the 2010 annual defense policy bill, Congress told the Department of Defense to develop regulations that would bar using open-air burn pits to dispose of certain materials — such as hazardous waste, medical waste, tires, treated wood and batteries — unless alternatives were ​​infeasible.

An April 2019 report showed the Defense Department had reduced the use of burn pits to nine, with seven in Syria, one in Afghanistan and one in Egypt.

A spokesperson for the Pentagon said last week that U.S. Central Command, which covers much of the Middle East, including Afghanistan, Syria and Egypt, has four active burn pits in use, while U.S. Africa Command has two active burn pits.

“All of them are being operated by host nation contractors or host nation military partners and none by U.S. forces,” the spokesperson said. “Due to security considerations, we do not release the exact locations of those burn pits.”