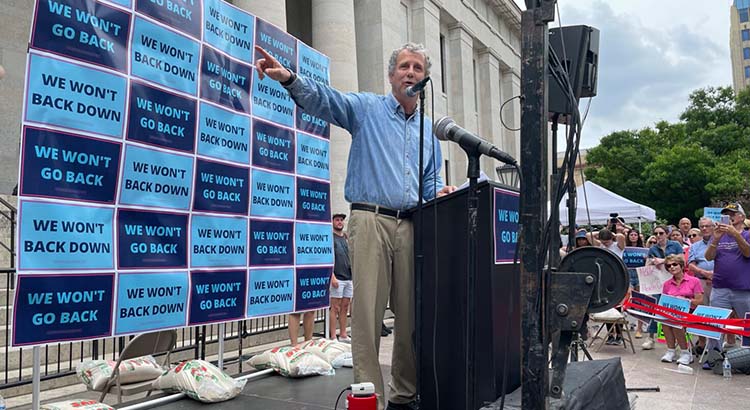 Most of the Democrats in the U.S. Senate have signed on to a letter to President Joe Biden pressing him to “take immediate action” to protect abortion rights, following the U.S. Supreme Court’s Friday ruling overturning Roe v. Wade.

The one-page letter, led by Health, Education, Labor and Pensions Committee Chairwoman Patty Murray of Washington and signed by 32 other Democrats, called the decision “an unprecedented assault on women” and pushed Biden “to use the full force of the federal government to protect abortion access in the United States.”

“Now is the time for bold action to protect the right to an abortion,” the senators wrote. “You have the power to fight back and lead a national response to this devastating decision, so we call on you to take every step available to your Administration, across federal agencies, to help women access abortions and other reproductive health care, and to protect those who will face the harshest burdens from this devastating and extreme decision.”

The letter is dated Saturday, one day after Biden said he would do everything in his power to protect access to abortion — but that his power as chief executive was limited and that it was up to Congress to codify protections that had existed for 49 years under the Supreme Court’s Roe v. Wade decision.

The current Congress, in which Democrats have a slim House majority and the Senate is split 50-50, has appeared unwilling to pass a federal law to protect abortion rights, Biden said, adding that voters should elect candidates to Congress who back abortion rights.

The decision by the court will allow each state to set its own abortion laws, leading to a patchwork of access throughout the country. The result is expected to be an uptick in the number of women traveling out of state for abortions, as well as unsafe abortions in states where the medical procedure will now be banned or heavily restricted. Across the United States, reaction has been swift.

Biden, who on Monday was at the G7 Summit in Schloss Elmau, Germany, is expected to return to the United States later this week, following a NATO Summit in Madrid, Spain.

In a sign of how Democrats plan to highlight the issue in the fall midterm elections, the Democratic Senatorial Campaign Committee, the caucus’ campaign arm, revealed a new website Monday. It is dedicated to highlighting Republican candidates’ abortion records.

The group produced a video showing a dozen Republican candidates for U.S. Senate seats saying they opposed Roe, and in some cases abortion rights categorically.

Herschel Walker in Georgia, for example, indicated he supported total abortion bans without exceptions. J.D. Vance in Ohio told an interviewer he opposed allowing abortions in cases of rape or incest.

The video included audio of Vance being asked if a woman should be forced to carry a child resulting from rape or incest.

“It’s not whether a woman should be forced to bring a child to term,” Vance told the interviewer. “It’s whether a child should be allowed to live, even though the circumstances of that child’s birth are somehow inconvenient.”

His campaign website describes him as “100 percent pro-life” and calls for “eliminating abortion.” Vance does support an exception if the life of the pregnant person is at risk, the New York Times reported in May.