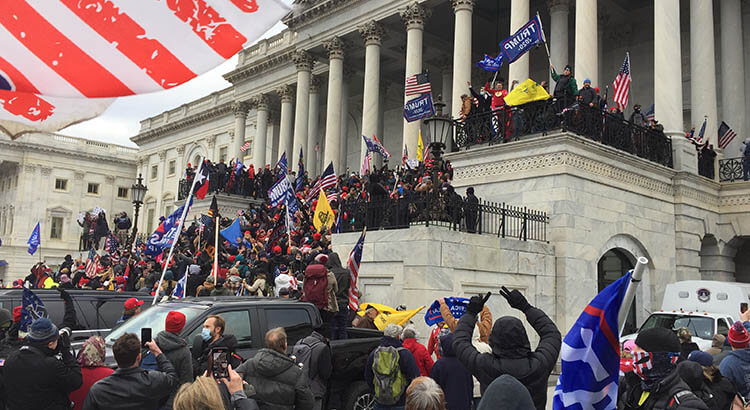 Picture a split screen on your TV. On one side a parade of prominent Republican officials in the Trump administration, in the Trump family, in the Trump Justice Department, in the Trump 2020 reelection campaign are spilling the beans about Jan. 6. Finally, Americans are hearing the truth about Trump’s Big Lie from his own people. And they pull no punches.

The defeated president knowingly deceived millions in the country about an election he lost. He pursued what he knew was an illegal plot to stay in office. He understood the criminality of his malfeasance but plowed ahead anyway. That’s what Trump’s senior advisors, White House counsel, campaign manager, attorney general, daughter and others testified under oath.

On the other side of your split TV screen are 2022 Republican midterm candidates. Almost to a man, they dismiss the explosive truths dropping on the Jan. 6 half of the screen. These pols intentionally reinforce what they know is false about a “stolen election” that wasn’t, and the need to restore “integrity” to elections based on massive fraud that wasn’t.

They know there is no evidence supporting either claim but repeat them anyway. Again, key Republicans in the Trump orbit reaffirmed there was “no there, there” about Trump’s declaration that he won but for the cheating. But there is a mountain of evidence that the former president deliberately violated the law and, as a federal judge deemed probable, “corruptly attempted to obstruct” Congress. New, damning revelations about the nefarious lengths Trump went to stay in power are jaw-dropping.

Yet campaigning Republicans continue to parrot Trump’s Big Lie without regard for the electoral damage inflicted. So, here’s a question for general election voters in Ohio — Republicans, independents, Democrats: How can candidates who are asking for your vote in November be trusted if they’re willing to lie to win favor from a likely criminal still conning the country about an election his own cybersecurity chief called the most secure in American history?

Every Republican running for federal office in Ohio has pledged allegiance to a man with no allegiance to the rule of law, as witnessed by his team of Republican enablers who drew the line at insurrection. In every congressional race, in every GOP gerrymandered district, proud defenders of an indefensible crook who watched the violent attack at the U.S. Capitol to stop the peaceful transfer of power — and did nothing for hours — have the gall to pitch themselves as principled politicians.

Noble these Trumpian toadies are not. Consider five Republican incumbent congressmen seeking reelection who voted, baselessly, to overturn the 2020 presidential election results after the Capitol was rampaged by a bloodthirsty Trump mob chanting “Hang Mike Pence!” One of those lawmakers, ranking Trump sycophant Jim Jordan from Ohio’s 4th U.S. Congressional District, is directly implicated in the president’s lawless scheme to seize a second term.

A participant in the Jan. 6 rally and a QAnon proponent — whose devotion to the would-be dictator was splayed across his lawn with a giant painted Trump sign — campaigns for Congress in the 9th District as “someone who can unify our communities.”  You can’t make this stuff up. But J.R Majewski, who also suggested that every red state should secede from the union, is in a toss-up district in a predicted red wave election year with a Trump endorsement.

That could be all it takes to unseat Democrat Marcy Kaptur, a 20-term incumbent with nearly four decades of public service.

The Ohio GOP candidate for an open U.S. Senate seat, is an elite coastal venture capitalist and carpetbagger. J.D. Vance moved back to Ohio to buy political prestige with Big Tech billions and strategically morphed from a Never-Trumper to an Ultra-Trumper. But Vance’s craven adulation of a man he once described as “noxious” and “reprehensible” was enough to snag a last-minute nod from the incorrigible fraud and win the Republican nomination.

Now the nominee shamelessly champions Trump’s deceit as gospel. The 2020 election was stolen. Large-scale fraud. Joe Biden is a “fake president.” Vanity Fair wrote about an interview Vance did on a far-right podcast where he practically drew a blueprint for a successful coup in 2024. After winning (or losing?) Trump would declare himself absolute ruler, dare the courts to enforce constitutional order and unilaterally wipe out “the institutions of the left” in a kind of “de-Baathification program, a de-woke-ification program.”

Before you panic about brownshirts clicking down Pennsylvania Avenue, be empowered to act. Be inspired by the real patriots investigating the Jan. 6 carnage and warning of the clear and present danger an unaccountable Trump presents. Be categorically unwilling, as an American, to surrender your democratic birthright to alt-right demagogues who a spin a violent insurrection to overthrow a free and fair election as “legitimate political discourse.”

And be repelled by those campaigning to represent you who defiantly stand with the only president in our history who trashed the peaceful transfer of power, cracked a fundamental pillar of our government and threatens to do it again. On your split TV screen one side is fighting for the rule of law and accountability. One is openly marching lockstep with a narcissistic fascist who knowingly tried to steal another term.

Nov. 8 will decide whether truth wins.