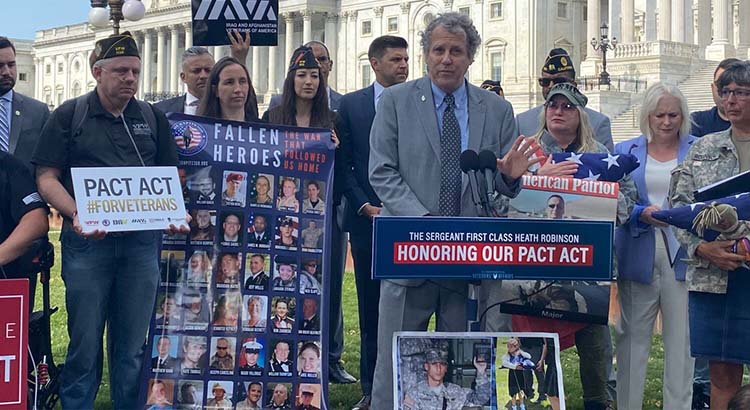 Ohio Democratic Sen. Sherrod Brown speaks at a press conference on legislation to provide health care for veterans exposed to burn pits on June 7, 2022. Susan Weber Zeier of Sandusky is on the far right of the photo. Photo by Jennifer Shutt, States Newsroom.
ShareTweet

The little engine that could lives in northeast Ohio. It chugs away in the form of a 65-year-old retired UAW worker who, after multiple setbacks, finally surmounted Capitol Hill. It was an improbable legislative odyssey for Susan Weber Zeier of Sandusky, who confided the whole experience was almost surreal.

On the cusp of long-awaited victory with a major bill in Congress to expand health care and disability benefits for veterans exposed to toxic military burn pits, a hopeful Zeier can’t help but pinch herself.  Who ever thought she would be an instrumental part of history? Who ever thought a gray-haired Ohio grandma would be schlepping around the august halls of the U.S. Capitol to buttonhole senators and congressmen with packets of information?

“You have a sense of you can’t believe you’re there, that you’re getting texts from a senator’s office asking if you can speak at a press conference tomorrow. It’s a little overwhelming at times and hard to take in. I’m just somebody from Sandusky, Ohio. But there’s a lot of people on Capitol Hill that know who I am now.”

Yes, they do. Zeier made sure of it. “I told Sen. [Sherrod] Brown that I was going to legally stalk him because he wasn’t going to forget my face, my voice. I wanted the burn pits issue to always be in the back of his mind. If you can get one member of Congress to fight for you and you just don’t ever give up, you can get it done.”

And she did — almost. The landmark bipartisan measure Zeier and other veterans’ advocates tirelessly supported was on its way to a final vote in the U.S. House last week and to President Biden’s desk for a certain signature. But the bill stalled unexpectedly, hung up on a procedural snag in Congress. The legislation’s presumed passage will be delayed until after the July Fourth congressional recess.

For Zeier, it’s just one more hurdle among many. But the momentum going forward is undeniable and the Ohio woman looks forward to being at the White House for the bill’s eventual signing. She anticipates the moment will be enormously satisfying yet bittersweet. “I would give all this up, meeting everyone I’ve met, to have Heath back,” she said. The bill is named after Sergeant First Class Heath Robinson of the Ohio National Guard who died in 2020.

Robinson was married to Zeier’s daughter Danielle. The couple lived with their young daughter Brielle in a Columbus suburb. Heath was a strapping 36-year-old marathon runner when he was knocked sideways by an inexplicable medical diagnosis — a lung disease so rare oncologists had no idea how to treat it. The Ohio National Guardsman was given weeks to live.

His family was devastated. Zeier recalled “the initial shock that he was going to die soon, and we just focused on making memories and hoping Brielle (then 3) would somehow remember him.” Doctors were flummoxed. How does an extraordinary type of stage four lung cancer — with no primary tumor presenting — suddenly and aggressively appear in a healthy, active-duty soldier?

What had the combat medic been exposed to?

Heath, along with millions of post-9/11 veterans, had been stationed near flaming, open-air trash piles at overseas U.S. military bases. A crude answer to the basic logistics problem of how to deal with piles and piles of military garbage. Everything from electronics and vehicles to human waste was regularly doused in jet fuel and set ablaze, spewing toxic fumes and carcinogens into the air.

For years, some 3.5 million soldiers, especially those deployed to Iraq and Afghanistan, inhaled those fumes. Noxious black smoke smoldered 24/7 over massive holes dug in the ground and filled with burning waste from military bases. Nearly 90 percent of veterans deployed to the Middle East were reportedly exposed to the poisoning effects of breathing the toxins and chemicals in the smoke. A danger, noted Zeier, that was well documented by military environmental engineers.

“Heath did guard patrol within 20 yards of a blazing burn pit for three months in Iraq,” she said. Like thousands of others similarly positioned, the toxic ramifications came years later when he was severely afflicted with acute health issues. The airborne pollutants he gasped from the notorious garbage-disposal fires were killing him. Like thousands of others, he struggled to get help from the Veterans Administration.

The V.A. denied the vast majority of burn-pit exposure claims over an impossible burden of proof. Service members suffering from respiratory distress, blood disorders, autoimmune diseases and rare forms of cancer like Heath’s were on their own.

“The more I learned the angrier I got,” said Zeier. “I realized that the entire process of using those burn pits was criminally negligent on the part of our government. There were lots of red flags about the air quality. Nobody’s ever going to be held accountable for that.”

Zeier made a promise to her dying son-in-law. “I would never stop telling his story until all the men and women who served like he did and are sick and being denied benefits by the V.A., that they’re all taken care of. That’s all he wanted.” Fulfilling that pledge consumed five years of Zeier’s life.

She clocked countless hours on research, emails, phone calls, meetings, and trips to Washington to lobby with other advocates and hold press conferences. Along the way a congressional aide (and Iraq vet) advised her to “channel your anger and transform it into fight mode, then go out there and do something!”

“So, that’s what I did,” said the determined Ohio engine who thought she could.