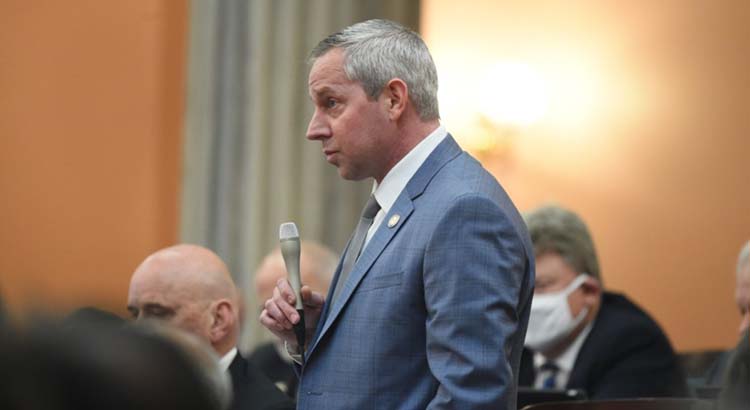 The Republican co-chair of the Ohio Redistricting Commission declined his fellow co-chairs invitation to adopt a new legislative redistricting plan, as was ordered by the Ohio Supreme Court.

The letter from state Rep. Jeff LaRe, R-Violet Twp., to state Sen. Vernon Sykes, D-Akron, went on to declare the the Ohio Constitution dictates “when and how the commission must respond to a plan that is invalidated” by the Ohio Supreme Court, despite the fact that it was the court who invalidated the maps for a fifth time last week.

The maps that were invalidated this time around were a carbon copy of a map also passed by the ORC in February, which was rejected by the state’s highest court then as well as unconstitutional and unduly partisan.

In its most recent decision, the Ohio Supreme Court majority gave the commission until Friday morning to come up with a new plan. That decision is not up to them, according to LaRe’s letter.

This comes after the court gave the commission deadlines for every other map attempt, all of which spawned commission meetings and discussions about how to meet the deadlines ordered by the court.

Former commission member and senate president Matt Huffman even introduced a previous map during the commission’s third attempt at legislative redistricting, saying presenting an old map was better than not meeting the court’s deadline.

LaRe’s letter also brought up the federal court decision given at the end of May, which allowed the Ohio Secretary of State to implement the map most recently adopted by the commission as the map to use in the August 2 primary for statehouse races, and in the November general election.

“It would be foolish for the commission to take any further action that would disrupt that election, or the general election that is scheduled a mere three months later,” LaRe wrote.

He said “logistical problems” also keep the commission from adopting a new plan by the June 3 deadline. Now that a map has been put in place, LaRe wrote, “it is not possible to draw a new general assembly district plan until the results of the November elections are known.”

“I fully expect the commission to adopt a constitutionally compliant general assembly district plan in advance of the 2024 elections,” LaRe concluded his letter.

The ORC did not hold any meetings in advance of the June 3 court-ordered deadline, despite the fact that Democrats requested it in three different letters.