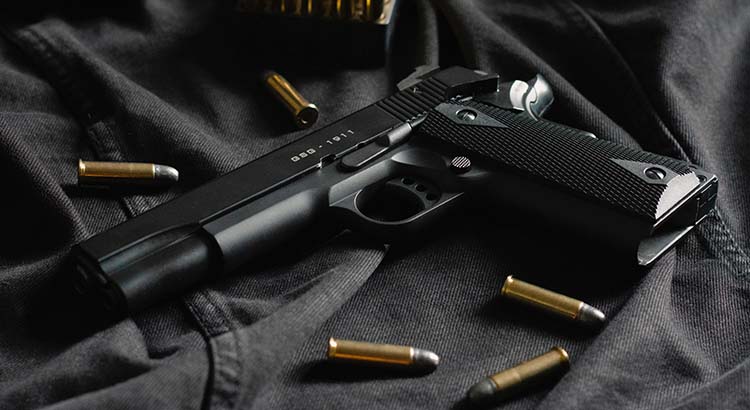 Republican state lawmakers sent a bill to Ohio Gov. Mike DeWine on Wednesday that empowers local boards of education to allow teachers to carry a gun in the classroom.

Under current law, a teacher would need consent of a board plus more than 700 hours of training to bear arms in school.

But under House Bill 99, that teacher would need consent of the board and to meet certain training requirements, which are capped by the state at 24 hours unless the local board demands more. The legislation, a rewrite of which was only unveiled Tuesday, doesn’t clearly establish any minimum number of training hours, and ample dispute and confusion exists as to what minimum standards the bill calls for.

The legislation comes mere days after the May 24 shooting in Uvalde, Texas, in which a teenager purchased two assault style rifles that he used to kill 19 young children and two teachers. Seventeen others were wounded.

“Last week I called on the General Assembly to pass a bill that would allow local school districts, if they so chose, to designate armed staff for school security and safety,” he said. “My office worked with the General Assembly to remove hundreds of hours of curriculum irrelevant to school safety and to ensure training requirements were specific to a school environment and contained significant scenario-based training. House Bill 99 accomplishes these goals, and I thank the General Assembly for passing this bill to protect Ohio children and teachers. I look forward to signing this important legislation.”

After a 2019 mass shooting in Dayton that killed nine people and wounded 17, a crowd demanded DeWine and other politicians “do something” amid the haunting familiarity of random, armed massacres in America. Several Republicans in the House and Senate co-opted the phrase Wednesday and said passing this bill is doing something.

“The thing that has to be done is stop the shooter,” said Sen. Terry Johnson, a McDermott Republican who regularly champions legislation expanding gun rights in Ohio.

“When people are bleeding, you have to stop the bleeding.”

On Tuesday, when Senators first unveiled a re-write of the House-passed legislation, a long line of teachers and anti-gun activists gave four hours of testimony pleading against the bill. A Fraternal Order of Police lobbyist joined them.

The legislation’s supporters were limited to a firearms lobbyist, and the CEO of a company that consults on active shooter response plans, which is owned by the Senate committee’s chairman, Sen. Frank Hoagland.

Democrats cited that lopsidedness and argued the legislation will cause more harm than help. They said hastily trained teachers will likely be ill equipped to respond to a fraught and traumatic situation like a school shooting with proper marksmanship and care.

Sen. Cecil Thomas, a Democrat and former police officer, said cops spend hours learning to use a firearm before they procure one. From there, they’re regularly retrained on its proper use and storage. Two dozen or so hours of training, he said, to carry a gun around children just doesn’t cut it.

Despite the typically staid and sober tone of the Senate, debate grew chippy at times. Sen. Niraj Antani, R-Dayton, accused Democrats of conjuring “crocodile tears” during this and other gun rights discussions. He said the legislation is the most important thing the General Assembly has done to prevent a school shooting in Ohio.

As the debate waged on, Sen. Hearcel Craig, D-Columbus, noted funerals were underway as he spoke for the dead children and teachers in Uvalde.

Rep. Reggie Stoltzfus, R-Minerva, described the legislation as an optional means of defense against an inevitable problem.

“School shootings have been around for decades,” he said. “They’re not going anywhere.”

What the bill does

For a board to allow a school worker to bear arms, the legislation requires that teacher to undergo training including tactics responding to “critical incidents” in schools, completion of tactical live firearms training, and completion of “realistic urban training.”

The legislation requires the “curriculum, instruction, and training” to follow the state’s private investigator and security guard firearm training, which requires 20 hours of certified training to carry a handgun.

Nonpartisan legislative researchers who analyzed the bill didn’t interpret this to require a minimum number of hours, nor did two attorneys who reviewed the legislation for the Ohio Capital Journal. However, Ryan Stubenrauch, an attorney and communications consultant, said he believed the legislation unequivocally requires at least 20 hours. Democrats argued the bill lacks a clear minimum requirement; Republicans disputed this point.

However many the hours, the training would require approval from a new body within the state Department of Public Safety. School boards would be required to notify parents that “one or more persons” have been authorized to carry a weapon in the school, but they wouldn’t need to specify.

Rep. Dontavius Jarrells, D-Columbus, asked lead sponsor Rep. Thomas Hall, R-Madison Twp., a hypothetical: If a teacher mistakenly shoots a student, could the teacher be held liable? Hall didn’t directly answer the question, claiming it’s irrelevant to the legislation and the question was a form of grandstanding.

Republicans emphasized the bill is permissive in that it allows local boards to opt in or stay away from arming teachers; and flexible in that they can require more training.

‘Asking for way too much’

Jagdish Khubchandani, a professor of public health at New Mexico State University, studied a variety of firearm prevention policies and evaluated their efficacy in the journal Violence and Gender.

In an interview, he offered a skeptical take of the idea. He offered more questions than answers: Some trained soldiers shoot poorly, how could teachers be expected to do better? What happens if a teacher accidentally hits a student? How do they store the gun? What if students get their hands on it? What toll does it take on students to learn everyday in “warzone” like schools?

“It’s asking for way too much, without evidence of impact,” he said.

He called the policy a Band Aid to a more complex problem, of mentally unwell teenagers with easy access to potent weaponry. He likened it to preparing for a heart attack by stocking up on medication but failing to exercise or diet.

As of 2019, 18 states allow anyone with permission from school authority to carry a weapon, according to the National Conference of State Legislatures.

The idea, which gained popularity after a spate of school shootings in the U.S., is broadly unpopular with educators. In a 2019 national survey of 2,926 teachers, more than 95% indicated they don’t believe teachers should carry a gun in the classroom. Even among the 16% of respondents who were gun owners, only 11.5% of them said being armed while teaching should be a part of teacher’s duties. Gallup polling from 2018 found 73% of teachers oppose the idea.

More Ohioans died from guns last year than any year on record from the Ohio Department of Health’s data warehouse.

Passage of HB 99 would mark another significant relaxation of Ohio’s gun laws. In 2020, DeWine signed a “stand your ground” law that removed a person’s duty to retreat from a perceived attack before responding with deadly force. Earlier this year, lawmakers removed background check and training requirements for Ohioans to carry a concealed firearm.