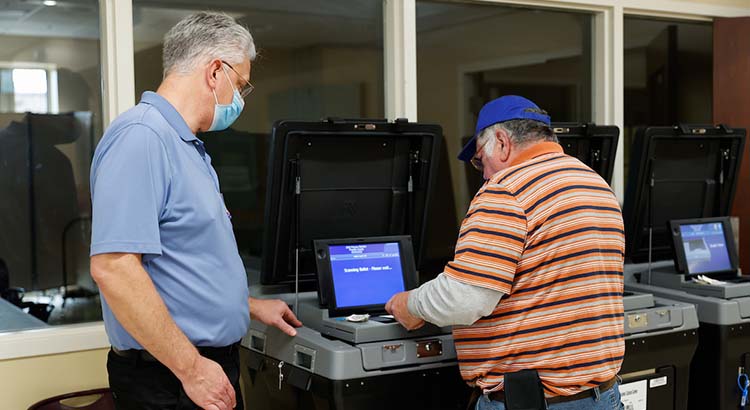 A voting location manager assists a voter with the ballot counter machine during the Ohio primary election, May 3, 2022, at the Noor Islamic Cultural Center, Dublin, Ohio. (Photo by Graham Stokes for the Ohio Capital Journal.)
ShareTweet

Election officials in 23 counties signed on to a letter asking the commission and LaRose to heed their warnings that the maps adopted by the commission and pushed along by a federal court are unconstitutional, and therefore would push precinct workers to be a part of elections “when the outcomes of those elections have already been predetermined by politicians who manipulated districts to prevent fair competition.”

“As precinct election officials, we cannot in good faith participate in a primary election on August 2 if it proceeds with unconstitutionally gerrymandered districts, and we advise our fellow poll workers to not be made complicit in illegitimate elections,” the letter stated.

The officials said they are continuing to collect signatures on the letter, and cite Ohio Attorney General Dave Yost in arguing more time exists for the General Assembly to change election dates and methods before the November general election.

The Ohio Redistricting Commission has also been given a June 3 deadline by the Ohio Supreme Court to resubmit a legislative district plan, after finding the maps adopted invalid for the second time.