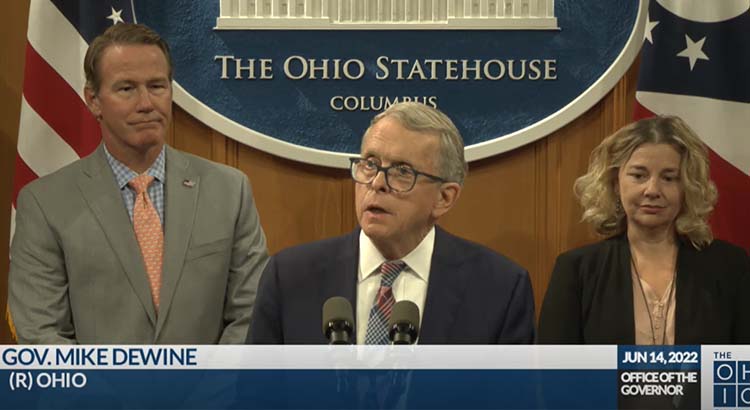 Ohio Gov. Mike DeWine has approved $3.5 billion for building and renovation projects over the next two years. The governor shared details of the capital budget Tuesday.

But perhaps more notable than the latest appropriations is DeWine’s plan for how to pay for them. Instead of funding the projects through borrowing, as the state normally does, DeWine plans to pay for the bulk of the budget in cash.

“If we pay cash for all of this, I am told by our budget team that it will save the taxpayers of the state of Ohio up to $1.6 billion dollars in interest in the coming years,” DeWine said.

DeWine explained lawmakers have already cleared his administration to pay $1.5 billion in cash, but he may go back to them for further spending authority. The move would give the state added flexibility going forward as interest rates rise. Ohio is in the position to pay ahead for these infrastructure projects at least in part because of an influx of federal dollars meant to assist with COVID-19 relief easing state balance sheets.

Walking through the budget, DeWine emphasized how these investments in physical improvements will support broader policy efforts. Dollars for hospitals and treatment facilities will further mental health and addiction services, for instance, he said. New funding for the Community Capital Assistance Program, he added, will continue helping people with developmental disabilities secure housing.

“The Ohio Department Developmental Disabilities worked with local partners and has authorized so far with that money the purchase of 62 homes, constructed 15 homes and renovated 344 homes,” DeWine described.

The budget will spend just over $400 million on the state’s jails and prisons including nearly $75 million to replace aging buildings and $85 million for various safety and security upgrades. DeWine boasted that the $515 million earmarked for Ohio’s state parks is the largest investment of its kind in state history.

The state will also spend $100 million on a new round of school safety grants, and devote $22 million to training facilities for firefighters, including a high-rise structure meant to simulate an apartment or office tower.

DeWine and Lt. Gov. Jon Husted also put significant emphasis on how investments tied to the deal bringing Intel to Ohio will yield benefits beyond the immediate area. Street and wastewater improvements will serve the region, DeWine argued, and the chips Intel starts making will benefit the country. Husted similarly framed the investments.

“It’s not just Intel, it’s the companies that we will bring with them that will create the economic momentum for a generation,” he said. “What we did is the envy of 49 other states, and they wish they would have had a chance to do it.”

Still, the money pouring into the area isn’t just for roads and sewers. After previously stacking up $5.5 million in tax incentives, the historic Newark Arcade will receive another $1 million in the capital budget to fund renovations. The glass-roofed shopping center is more than a century old and has been closed for improvements since 2019.