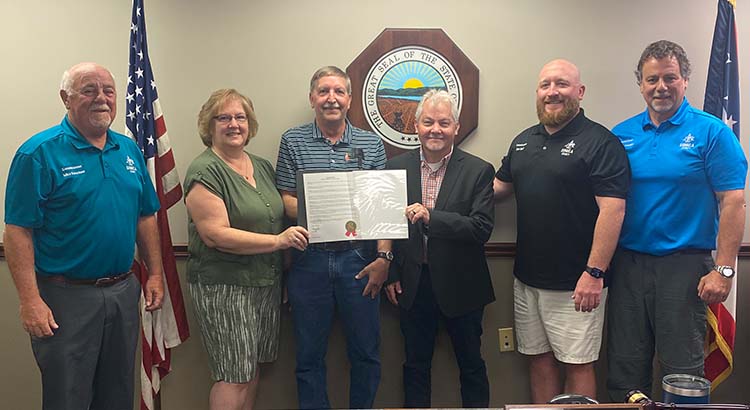 Tiffin, Ohio — The Seneca County Board of Commissioners approved a resolution Thursday morning formalizing its strong opposition to any expansion at Sunny Farms Landfill.

Draft language for the resolution was introduced on June 2 followed by another draft being publicized on June 9. After receiving feedback from various sources, a final resolution was approved Thursday morning.

The resolution notes that WIN Waste Innovations, the operator of Sunny Farms Landfill, has filed a Permit to Install Application with the Ohio Environmental Protection Agency to expand the north unit of the landfill. The expansion would grow the footprint horizontally and vertically, allowing for an increase in the landfill’s allowable daily intake from 7,500 tons to 12,000 tons, making it comparable with the intake currently allowed at Ohio’s largest landfills.

It also states that while the county commissioners have no direct authority over the regulation of landfills, the board still emphasizes the importance of timely action by the Ohio EPA, the Seneca County General Health District, and any other regulatory authorities to ensure that the landfill complies with all state and federal rules and regulations with respect for the safety of county residents.

According to the resolution, the commissioners strongly oppose any expansion or growth at Sunny Farms Landfill and urge the landfill’s operators to make significant improvements in controlling emissions and completely mitigating potentially harmful health effects at the landfill’s current size. The document also respectfully requests that WIN Waste Innovations rescind its Permit to Install Application for expansion of the north unit until Sunny Farms Landfill demonstrates compliance with the Clean Air Act and with all other state and federal rules and regulations, as required of all solid waste facilities in the state of Ohio

You can view the resolution in its entirety by clicking here.

In other action, the commissioners approved a proclamation recognizing June 19-25 as National Amateur Radio Week.

Mike Mastro and Denny and Deb Wilkinson, from the Seneca Radio Club, were in attendance to accept the proclamation. The trio explained how amateur radio works to send and receive messages to and from locations across the world. Mastro said he has even communicated with amateur radio operators in Australia and Italy, among many other places.

From 10 a.m. on June 25 to 2 p.m. on June 26, the amateur radio club will be participating in national amateur radio Field Day. The event is to occur at Meadowbrook Park and will even include bouncing a radio signal off the International Space Station to send a message across the country.

Not only is amateur radio a fun hobby for the nearly 50 people in the club, but Denny Wilkinson said the technique, skill and equipment used by this group could be very important in case of an emergency when local communications equipment may not be functioning.

The opportunity earned accreditation after state officials reviewed all aspects of the school’s programming including thousands of data points.

“This is the highest level of accreditation a board can receive, and it is the SCOC’s first review that includes zero citations,” Hurst said. “This recognition places SCOC at a high level of excellence since very few board reviews have ever achieved zero citations.”

Hurst, and Board President Erin Simmons both said they were proud of the staff at the opportunity center.

Also during the session, Sheriff Fred Stevens presented a 45-page annual report for 2021. You can view that report in its entirety by clicking here.