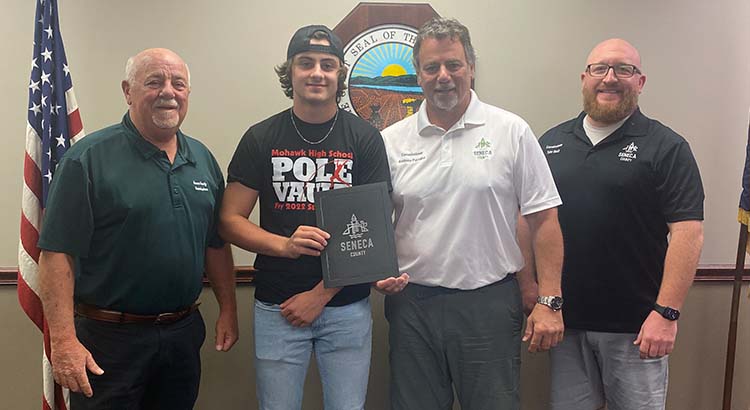 Tiffin, Ohio — The Seneca County Board of Commissioners spent the first part of its meeting Thursday morning congratulating Mohawk High School’s Zaiden Fry for winning his second state championship in the pole vault event this June.

The board signed and presented a proclamation honoring the standout athlete.

Fry, joined by his family, coaches and school administrative staff, said he was appreciative of being honored by the commissioners.

Commissioner Tyler Shuff told Fry that “the entire community” is proud of him for his accomplishments. Fry, who will be a senior next school year, said he plans to continue training hard and working to bring home a third state championship next season.

In other action, Seneca County Board of Elections Directors Jim Ehrman and Lori Ritzler spoke with the commissioners and were approved for $46,105 for a lease payment for upgraded electronic poll books. Ritzler said the machines have been in use since about 2017 and have greatly increased the efficiency of the election process for staff and voters alike, compared to the previous paper poll books.

Although the machines have worked well, new cybersecurity directives from the Secretary of State’s Office make it so the board of elections must upgrade to newer models before the November election. Ritzler said it is a good possibility that some or all this funding could be reimbursed by the state government, but that decision has not been made yet.

Shuff thanked Ehrman and Ritzler for their hard work in providing accurate and transparent elections for local voters.

County Administrator Stacy Wilson also commended the Board of Elections team for their hard work and read an e-mail from Secretary of State Frank LaRose’s Office.

The email states, “We had nothing but positive feedback to offer during our discussions of Seneca County Board of Elections. We want to commend you on an excellent performance, even under extremely difficult and constantly changing circumstances due to redistricting … you made us all proud during the May 3, 2022, Primary Election.”

In other business, Seneca County Airport Operator Brad Newman updated the commissioners, including that his son Andrew is likely to begin taking on more of a leadership role with the airport.

Brad Newman said that Andrew has been helping at the airport since he was 10 years old.

The commissioners also agreed to provide as much as $48,000 to re-seal and stripe the runway. Newman is working to get a new quote for the work. Re-sealing and striping the taxiway and the ramp will also need to be completed in 2023, with quotes of about $38,000 and $22,467, Newman said. Also during the session, the commissioners canceled the July 7th and July 21st meetings due to scheduling conflicts, and also reminded the public that an EMS evening session is scheduled for July 14th at 7 p.m. at the North Central Ohio Educational Service Center.

During commissioners’ reports, Commissioner Mike Kerschner responded to an elected official who asked last week what the Seneca County EMS system has accomplished over the past eight years. Kerschner thanked volunteers and EMS leadership and provided a lengthy list of accomplishments. The list included deploying a full-time, 24/7/365 crew out of Bettsville, that has been running since April, ensuring no out-of-service time. This full-time crew went into service in about 90 days once the housing was adequate for 24-hour shifts. The county EMS budget has been increased to pay for this staff to ensure coverage of the county. Kerschner also mentioned that volunteer EMTs have been supplemented with the help of 14 full-time EMS crew members and 9 part-time EMS crew members.