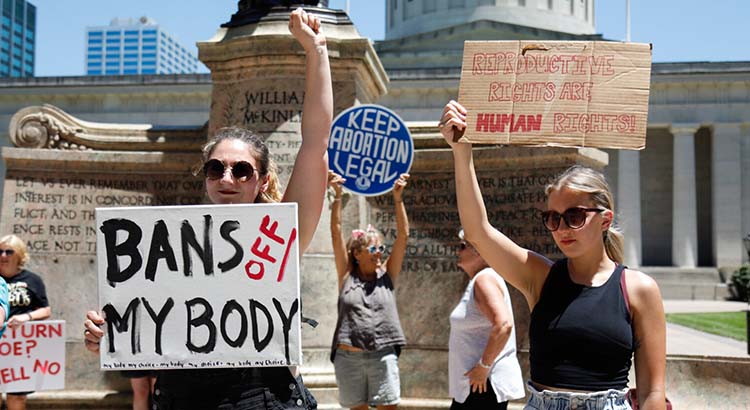 COLUMBUS, OH — JUNE 24: Rebecca Molnar of Hilliard (left) acknowledges support from a passing car from a small group of protesters gathering after the Supreme Court announced the reversal of Roe v. Wade, June 24, 2022, at the Ohio Statehouse, Columbus, Ohio. (Photo by Graham Stokes for the Ohio Capital Journal.)
ShareTweet

Local legal officials say they and other city attorneys and county prosecutors in the U.S. will not make abortion ban enforcement a priority.

Zach Klein, city attorney for the city of Columbus, and Cuyahoga County Prosecutor Michael O’Malley signed on with more than 60 other prosecutors throughout the country, pledging not to use their offices’ resources to enforce abortion bans.

“We will continue to use our prosecutorial discretion to put the safety and security of Columbus residents first by allocating our resources to target the most serious crimes facing our community,” Klein wrote in a statement.

The city attorney’s office does not prosecute felony offenses, of which most abortion-related charges would be. Those would fall under the Franklin County Prosecutor’s Office.

However, legislation currently being considered by the Ohio legislature could include misdemeanor charges, such as a charge of “promoting” abortion, and the city attorney plans to keep from using his resources on those charges as well, a spokesperson for Klein said on Tuesday.

“The announcement that the City Attorney’s Office will not prosecute abortions shows women, health care providers and residents where we stand should these cases come before us,” said communications director Pete Shipley.

The letter, which was created on June 24 and is still being updated with more attorneys signatures as of Tuesday, says the attorneys “cannot stand by and allow members of our community to live in fear of the ramifications of this deeply troubling decision.”

“Laws that revictimize and retraumatize victims go against our obligation as prosecutors to protect and seek justice on behalf of all members of our community, including those who are often the most vulnerable and least empowered,” the letter states.

Though the attorneys didn’t all agree on a moral level about abortion, they agreed individual beliefs shouldn’t dictate the justice system.

“But we stand together in our firm belief that prosecutors have a responsibility to refrain from using limited criminal legal system resources to criminalize personal medical decisions,” the letter stated.

Currently in Ohio, abortion is legal up to six-weeks of pregnancy. Legal ramifications of the law are focused on the medical professionals conducting abortions, not on those receiving the abortions. Criminal and civil penalties could be leveled against doctors.

A bill that sits in the legislature awaiting committee passage would ban abortion entirely, with no exception for rape or incest, and create penalties for “promotion” of abortion as well.