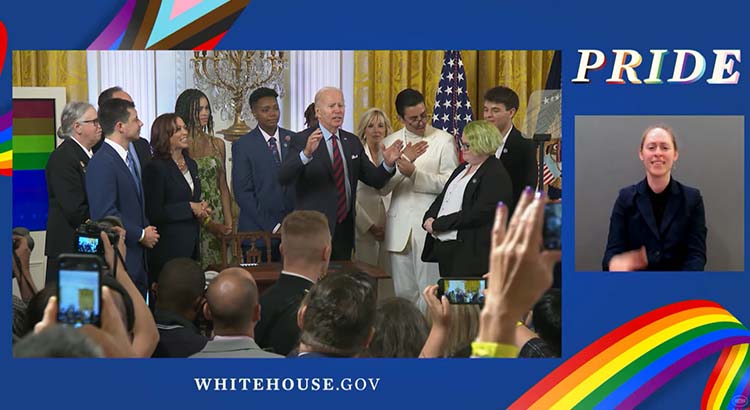 Screenshot from the White House feed is of the Pride Month event today at the White House, where the president signed an executive order protecting the rights of LGBTQI+ youth.
ShareTweet

The order is meant to counter laws in Republican-led states that restrict the rights of LGBTQI+ kids and their families. A senior administration official referenced Texas and Florida as two states where LGGTQI+ youth “have their rights under attack.”

According to a White House fact sheet, Wednesday’s order — issued during Pride Month — directs the Department of Health and Human Services to clarify that federally funded health providers may not offer conversion therapy, a discredited program that seeks to change a person’s sexual orientation.

Biden is also encouraging the Federal Trade Commission to consider designating conversion therapy a deceptive trade practice. He will direct the departments of State, Treasury and HHS to develop an action plan to help nations ban the practice worldwide.

The order will also task HHS with addressing barriers to mental health care, reproductive care and HIV prevention and treatment for LGBTQI+ people and will direct the department to work with states to promote access to gender-affirming care.

The order will direct the U.S. Education Department to create a working group on LGBTQI+ students and families to advance policies for states and school districts “to promote safe and inclusive learning environments,” according to the fact sheet.

In a call with reporters, a senior administration official said more than 300 state laws targeting LGBTQI+ people and their families “bully kids.”

“Hateful, discriminatory laws that target children are out of line with where the American people are,” the official said. “President Biden is going to use his executive authority to protect kids and families.”

The Texas law subjects to prosecute families of transgender kids who seek gender-affirming care, which is recommended by major medical groups to treat gender dysphoria.

Other state bills under debate prohibit health care for transgender youth, bar transgender students from school sports or from using bathrooms that align with their gender, and make it more difficult for transgender people to get official identification documents, according to an American Civil Liberties Union tracker.

The order will use existing funding at HHS, the Education Department and other federal agencies responsible for carrying it out.

Biden signed the order at a White House event Wednesday with members of Congress, LGBTQI+ state and local officials and advocates.