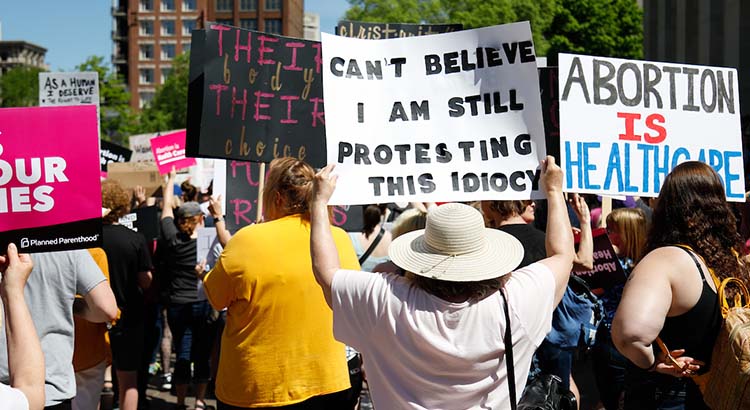 As with so many aspects of the culture wars, the American debate over abortion seems to spend little time considering what policies will actually do to the people at whom they’re aimed.

Proponents of restrictions — or outright bans — believe they’re fighting to save unborn lives. But while the question of when an unborn fetus becomes a person is more a question of faith than science, those restrictions can have profound impacts on many who are undeniably people.

Of course, the people who will be most profoundly affected will be women and families who don’t or barely have the money to leave the state for an abortion in the likely event that Ohio severely restricts or bans the procedure after Roe v Wade is overturned.

So it seems important to see what data can say about who these women are and what restricting their ability to end unwanted pregnancies means for Ohio and the rest of the country.

Each year, the Ohio Department of health compiles abortion statistics in the state, giving a partial picture of who is getting them.

One striking fact is how many fewer women from all backgrounds are terminating their pregnancies. The number has plummeted from just under 45,000 in 1977, the first year for which the state published the statistics, to around 20,000 in 2020, the most recent year for which numbers are available.

Perhaps not surprisingly, the largest group of women who got Ohio abortions in 2020 were in their 20s — 59% — followed by women in their 30s, 29%. Also unsurprising is that 62% of women got abortions before they were nine weeks pregnant, while less than 2% got them after 19 weeks of pregnancy.

And, while it’s not surprising that unmarried women are more likely to get abortions, in 2020 they were much more so. The Ohio health stats indicated that 82% of the 20,605 women who received abortions in the state were never married, separated, divorced, or widowed.

But what is perhaps most striking among the Ohio statistics is how overrepresented Black women were.

Ohio is only 13% Black, but Black women received 48% of all abortions in in 2020, the largest single group. Whites, by contrast, make up 82% of the state’s population, but white women made up only 44% of the group receiving abortions.

The fact that so many unmarried and Black women were having abortions might suggest they didn’t believe they have the emotional and financial support they needed to raise a child — often in addition to children they already have. Also, more than 27% of Ohio Black people were living in poverty in 2020, compared to just 10% of white people.

However, there is evidence that at least nationally, the poorest women are less likely to seek abortions than their more affluent peers.

A 2015 study by the Brookings Institution found that while women living below the poverty line were much less likely to use contraception and more likely to become unintentionally pregnant, those who did were less likely to get abortions.

Between 2011 and 2013, 32% of women making four times the federal poverty level who had become unintentionally pregnant got abortions, the study said. That compares to less than 9% of women living below the poverty line during the same period.

Cost might be something keeping the poorest women away from the abortion clinic.

Planned Parenthood reports that its lowest-cost, early-pregnancy procedure in Ohio costs $650. If so, further restrictions seem likely to force up the cost — particularly if they force women to travel out of state for the procedure.

It seems important — with the U.S. Supreme Court apparently poised to overturn the 1973 decision — to look at the consequences it might have for women who won’t be able to get abortions and society generally.

One paper published in 2020 by the National Bureau of Economic Research attempted to do that.

In it, two economists and a demographer used credit data to build on the 2016 Turnaway Study, which followed 1,000 women who had sought abortions at 30 clinics across the country. Through follow-up interviews, that study sought to compare women who were turned away from abortions to those who received them.

In the follow-up analysis, “The Economic Consequences of Being Denied an Abortion,” the research team compared credit information between women who were denied abortions due to gestational limits in states to those of women who received abortions, but were within two weeks of those limits. It sought to look at financial stress caused not only not only from the costs of having and raising a child, but also from  “a well-documented large and persistent decline in earnings (i.e. ‘child penalty’) that women experience on average following the birth of a child.”

The three researchers detected a lot of financial stress.

“We find that abortion denial resulted in increases in the amount of debt 30 days or more past due of $1,750, an increase of 78% relative to their pre-birth mean, and in negative ‘public records’ on the credit report such as bankruptcy, evictions, and tax liens, of about 0.07 additional records, or an increase of 81%,” the paper said.

It added, “These effects are persistent over time, with elevated rates of financial distress observed the year of the birth and for the entire 5 subsequent years for which we observe the women. Our point estimates also suggest that being denied an abortion may reduce credit access and self-sufficiency, particularly in the years immediately following the birth, although these estimates are not always statistically significant.”

Of course, worse economic outcomes for those mothers and their babies don’t just affect them. They also affect any other children and family members the woman is caring for.

Being forced to carry a child to term might also increase the chances that a child is unwanted and that can cause bad societal outcomes, such as an increase in crime.

In 2001, economists John J. Donohue III and Steven Levitt published “The Impact of Legalized Abortion on Crime” in the Quarterly Journal of Economics. It tried to explain the precipitous drop in crime through the 1990s from all-time highs in the 1960s, 1970s and 1980s.

After ruling out other theories for the drop, it concluded that the 1973 legalization of abortion resulted in many fewer unwanted children and, as that cohort came of age, a lot less crime.

“Legalized abortion appears to account for as much as 50% of the recent drop in crime,” it said.

The paper stirred a ferocious response across the political spectrum. Some, including Supreme Court Justice Clarence Thomas, compared it to the pseudo-science of eugenics, which advocated sterilization of people with traits deemed “undesirable.”

In a 2019 podcast, Levitt said subsequent research reinforced their earlier work. He also denied that his and Donohue’s research advocated forcing anybody to do anything.

“I actually think that our paper makes really clear why this has nothing to do with eugenics,” Levitt said. “In our hypothesis what happens is abortion becomes legal, women are given the right to choose and what out data suggest is that women are pretty good at choosing when they can bring kids into the world; when they can provide good environments for them.”