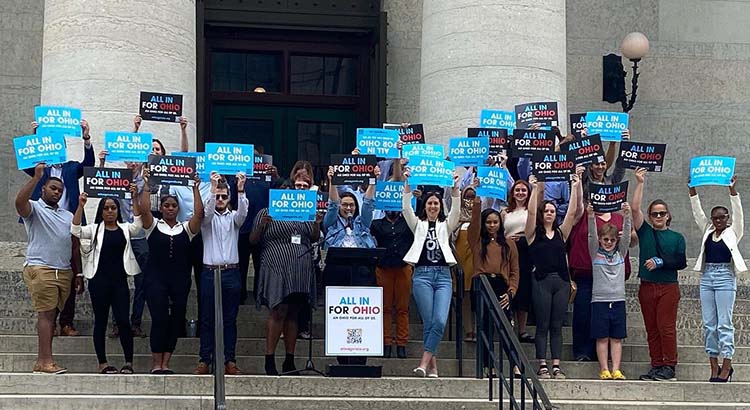 Advocates for the All in for Ohio Agenda gather in front of the Ohio Statehouse. Photo provided.
ShareTweet

By Prentiss Haney and Hannah Halbert

Earlier this month, Ohioans of all walks of life gathered outside the Statehouse because we’re sick and tired of what’s happening inside it.

Inside, extremist, and unaccountable lawmakers have been pushing policies that would target trangender kids, muzzle teachers and determine when and how we start a family. Meanwhile, some of those same lawmakers are trying to funnel more of our public resources to wealthy corporations that push down our wages and fight even the most basic worker protections.

Outside, a coalition that includes Policy Matters Ohio, Ohio Organizing Collaborative (OOC), Ohio Federation of Teachers, Ohio Education Association and Freedom BLOC (Black Led Organizing Collaborative) launched the All in For Ohio Agenda. We called for a new vision for our state — one that embraces abundance over scarcity, healing over punishment, and solidarity over division.

We created the agenda because we want what most Ohioans want: safe, healthy, and beautiful communities where everyone can live with respect and dignity, regardless of their race, gender, zip code or income level. The agenda is built on six policy pillars that focus on revenue, education, voting rights, economic dignity, community safety, and healthy communities.

Our policy solutions are practical and possible. Many could be immediately funded by the recent influx of federal dollars and sustained by more balanced tax policy, including restoring the top income-tax rate to what it was under Republican Gov. George Voinovic and closing some special interest tax breaks that benefit the wealthy and corporations. Since 2005, state lawmakers drained about $8 billion from Ohio communities a year to hand out tax cuts and tax breaks to the richest Ohioans and wealthy corporations. As a result, the richest 1% of Ohio households — those with average annual incomes of almost $1.5 million — have received an average annual tax cut of nearly $51,000. Our agenda simply asks those who do well in Ohio to do right by Ohio.

A handful of corporate-backed extremists want to divide us by race, gender, and geography so we can’t come together and demand the wealthy pay what they truly owe. They want to undermine our faith in one of the most important goods government delivers: public education. These same extremists are also afraid of losing power as the nation changes, so they want to stop teachers from talking about race or even saying the word “gay.”

Public schools serve as anchors for communities and the center of family life. That’s why our agenda places so much emphasis on education. Some of the same people attacking teachers and students want to take our public dollars from our schools and give them to the wealthy and corporations. In the last state budget, the All in For Ohio coalition pushed lawmakers to finally fix the way they fund K-12 education by passing the Fair School Funding Plan. As we prepare for the 2023-24 state budget, we’re calling on lawmakers to make the plan permanent. Otherwise, we’ll return to a system that prioritizes wealthier, whiter districts and shortchanges districts where residents tend to have lower incomes. The old system underserved both rural and urban communities, and especially harmed Black and brown students. We can’t afford to go back.

Our agenda recognizes that when we live in safe communities with clean air and water and have jobs that pay fair wages and offer good benefits, we’re better able to care for ourselves and our families. For too long, certain politicians have stacked the deck against everyday Ohioans. We’re calling for policies that ensure all Ohioans have enough food on the table and can get the health care they need. We’re pushing lawmakers to increase funding for child care so more parents can work knowing their kids are safe and child care centers pay caregivers a wage that dignifies the critical work they do. Our agenda will help working people share in the prosperity they create by raising the minimum wage. We can make our communities safer by embracing a caring response for people in crisis and community-based programs that emphasize healing, instead of relying primarily on punishment and aggressive law enforcement. And our agenda will get to the root of the racial disparities in life expectancy, infant mortality, and maternal mortality by recognizing racism as a public health crisis.

Right now, some powerful Ohio policymakers don’t embrace our vision and don’t seem to value their own constituents’ voices. They have flagrantly defied the will of the people by refusing to pass fair legislative maps, ignored calls to end attacks on health care and schools, and continue to put forward divisive legislation. The All in for Ohio agenda will protect our right to speak out in peaceful protest. It will make it easier for all Ohioans, regardless of where we live or what we look like, to raise our voices by voting. Our agenda has real people behind it. All in For Ohio’s organizing partner, the OOC, is registering 50,000 people to vote this year. We know that we cannot simply wait for some politicians to do the right thing. Our agenda is pointing the way toward the beautiful future we can create together. Now we must come together and build the power we need to make it a reality.

Hannah Halbert is the Executive Director of Policy Matters Ohio. She joined Policy Matters in 2010 as a policy liaison. She had previously spent nearly four years with the Equal Justice Foundation and the Legal Aid Society of Columbus where she protected homeowners from foreclosures during the housing crisis. Before becoming executive director of Policy Matters, Halbert was named project director in 2018, overseeing work and wages research. Halbert also serves on the board of the Central Ohio Worker Center and the Ohio Association of Nonprofit Organizations. Halbert has a master’s in nonprofit management, a law degree from Hamline University and a bachelor’s degree from Transylvania University.