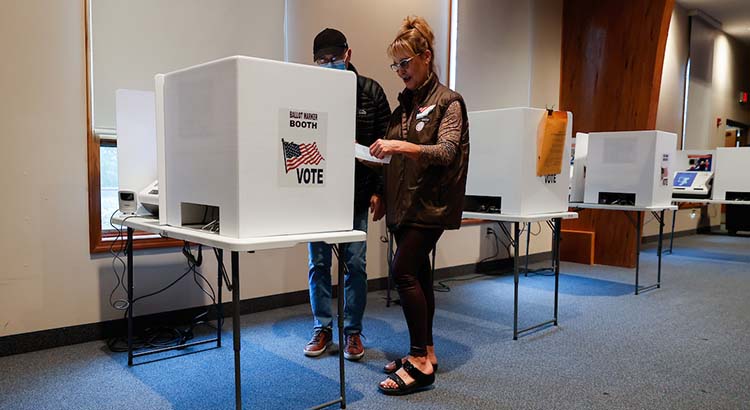 The foreboding of the late Supreme Court Justice has come to pass. Women are being denied decision-making power over their own lives. They are being dehumanized as lesser. Being robbed of bodily autonomy. Courts, lawmakers and physicians are deciding what’s best for pregnant women — after establishing that they lack the capacity and privilege to make choices for themselves.

The forever story to treat women as second-class citizens has come to a dark chapter about dystopian patriarchy with chilling parallels to “The Handmaid’s Tale.” The U.S. Supreme Court is poised to strike down a constitutional right that, for half a century, has given women the choice to carry a pregnancy to term or not. We’re back to 1973. Pregnant women without access to abortion are forced to give birth.

Over two dozen other states are in the same camp. Bills have been passed or are pending that would severely restrict or outright prohibit the ability of pregnant women to make important decisions about their lives, including whether, when and with whom they choose to become parents. There is talk among congressional extremists to impose a federal ban on abortions, outlawing the procedure nationwide.

The reality of this fast-approaching doomsday for women and their self-determination is impossible to fully fathom after nearly 50 years of protected reproductive rights. Ginsburg said many times that she feared Roe v. Wade (legalizing abortion) would be narrowed and that it would be poor women, who lived in areas where access to abortion was already limited, who would suffer the most. But she was “skeptically hopeful” that the Supreme Court would not overturn landmark precedents with abandon and that the core of Roe’s protection for reproductive choice would ultimately prevail.

The court’s leaked document — overturning Roe and Planned Parenthood v. Casey with abandon — may well mirror its finalized version. Overnight, the constitutional liberty millions of women have taken for granted when making personal decisions about how to handle a life-altering pregnancy will likely be erased. Ginsburg refused to believe that would happen. Not even a narrow-minded partisan bench would summarily waive judicial respect for long-standing precedents simply because it had the ideological votes to do so.

She knew how dire a post-Roe world would be for the least powerful — low-income women, teenagers, rural women, LGBTQ+ people and Black and brown women who have less access to health care. Ginsburg made the clear connection between abortion restrictions and other forms of sex discrimination. Reproductive rights were about equality. Women, like men, deserved unfettered agency over their lives and individual choices.

“Two generations of young women have grown up understanding that they can control their own reproductive capacity and in fact their life’s destiny. We will never go back to the way it once was.”

Roe gave every woman the right to abortion as a choice. It was her business what to do with her life and no one else’s. Ginsburg was adamant. A woman’s fate is not decreed by fiat. It belongs to her.

Those who wield absolute leverage at the Supreme Court and state governments will impose their minority agenda on America because they can. Right-wing political appointees on the court have a lock on power. Far-right legislators in Ohio and elsewhere have a lock on power through gerrymandered districts. Theirs is a battle to exert tyrannical control over due process. It matters not that a consistent majority of Americans support the right to abortion and the reproductive freedom it represents.

It is at moments like this that we need the wisdom of the “Notorious RBG” to sustain us and gird us for the long haul to restore hard-won rights. The post-Roe era is here but women (and men) who believe in equal protection under the law do not have to go quietly into the good night.

Ginsburg often said, “Fight for the things you care about but do it in a way that will lead others to join you.”

The women who marched on D.C. in the largest single-day protest in U.S. history are ready to go to war for the women of child-bearing age yesterday, today and tomorrow.

The struggle moves to the Statehouse where radical legislation aimed at women is taking shape.

In Ohio, several draconian measures are under debate to ensure that no abortion is performed in the state under penalty of prison. Many of those introducing, co-sponsoring and pushing passage of these bills that treat pregnant women as children incapable of making adult decisions will be on the ballot this year. That’s when the first volley of furious female voters must fly.

It won’t be easy. But we will not submit to less than. We will not go back.