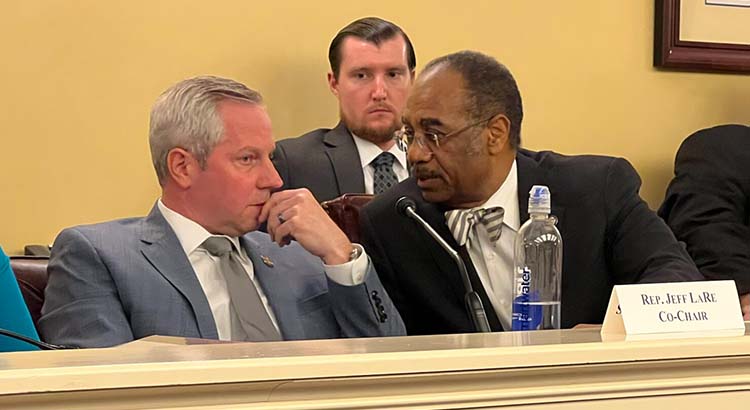 The Ohio Redistricting Commission is asking the state supreme court to rule on a legislative plan previously deemed unconstitutional only after it has been used for the 2022 general election.

Those that agreed to resubmit a February version of the legislative redistricting plan treated the new/old plan as a “stop-gap” measure in arguments against objections filed with the Ohio Supreme Court.

“The Commission is out of options,” Secretary of State Frank LaRose said in his response to objections.

Court challengers have asked the state’s highest court to hold the commissioners in contempt for their actions in the process, including violating supreme court orders.

Gov. Mike DeWine said objections to the maps “are completely detached from both the facts and reality.”

“Their submissions repeat the same hypercritical refrain, ignoring that the Commission’s principal constitutional charge is to craft redistricting plans for incorporation and use in Ohio’s statutory framework so that elections may, in fact, proceed,” DeWine stated in his filing with the court.

LaRose took his turn to advise the supreme court on what next steps should be, but they include a separate court, namely the U.S. District Court, taking up a case that asks the federal court to intervene where the commission and the supreme court have not.

A three-judge panel of that court have said they will order that the very same map re-adopted by the commission on May 5 be pushed through as the map for the 2022 general election.

The state’s chief elections officer said the federal court must set the Aug. 2 primary date “in stone,” while also urging the General Assembly to put a plan in place regarding election deadlines.

“If either of those contingencies is not met, millions of Ohioans run the risk of being denied the right to engage meaningfully in the elective process,” LaRose told the Ohio Supreme Court. “That is an outcome the Secretary cannot accept.”

LaRose didn’t blame just the court or the commission for current situation, however. He pointed to inaction in the General Assembly as part of the problem leading the commission to its brick wall.

“The General Assembly did not act and there is no indication that it will ever be able to secure supermajority votes in each chamber to pass emergency legislation to set a 2022 General Assembly primary election date and associated other election deadlines for the state legislative districts,” LaRose stated.

LaRose, who has voted with the majority in adopting every legislative plan thus far, acknowledged in the documents that the plan had previously been rejected by the supreme court, but said the duplicate adoption “should not be viewed as an attack on this court’s previous ruling.”

They stood behind the statements LaRose made in his response and in verbal and written statements he made during last week’s commission meetings laying out the election, essentially saying a new plan would be impossible to implement.

“Accordingly, the realities of administering Ohio elections compelled the commission to resubmit the third plan,” McColley and LaRe stated in court documents.

The two legislators also “are mindful that the Third Plan was previously invalidated by the Court,” but dug in their heels along with LaRose on the urgency of election administration.

“In the alternative, if the Court invalidates the Third Plan again, Respondents ask the Court to delay requiring any further remedial action by the Commission until after the 2022 elections, at which time elections will determine which Commission members return to the Commission,” they wrote.

Despite the fact that LaRose said even an Aug. 2 date couldn’t work during commission discussions and in court documents that say legislative action would need to be confirmed as well, LaRe and McColley contend that Aug. 2 is the only viable election date “unless this Court wants to risk the administration of the 2022 election, confuse the electorate, and drive down turnout.”

Also to prevent electorate confusion, McColley and LaRe said the 2022 election should go forward with the third map, and any ruling from the court should come after it, whether or not the map is deemed unconstitutional.

None of the court documents delve into the details of whether an election might be deemed invalid if maps used during the election are later ruled unconstitutional.

The only two saying the court should no longer look to the commission as a source of redistricting power were the two Democratic members, who have stood behind challengers of the maps at every turn.

“This Court must also discard any sense that the Republican Commissioners will abide this Court’s authority and the Ohio Constitution in the future unless it takes stronger action,” state Sen. Vernon Sykes and House Minority Leader Allison Russo said in their responses to the court.