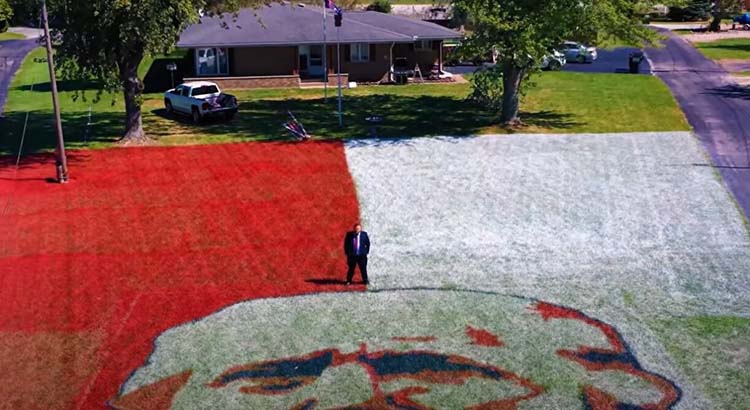 J.R. Majewski, an Air Force veteran who says he works in the nuclear industry, will face off against Democratic Rep. Marcy Kaptur, who first won the seat in 1983.

If Kaptur wins, she’d become the longest serving congresswoman of all time. However, she faces an inflationary economy, an ongoing pandemic, an unpopular president, historical headwinds and a newly competitive district after it was redrawn.

“This district is going to make up its mind. Do you want Marcy Kaptur? A lady that has been in office, served our district for 38 years? Or do you want a guy that’s grown up in Toledo, that has faced all the odds that we all face today,” he said to The 419 Grind, a Toledo-area interview show.

“I’m living proof you can make it out of Toledo if you make the right decisions.”

Majewski built up a national profile in 2020 after media appearances spotlighting his front yard, repainted as a Trump banner large enough to read from hundreds of feet in the air. He told Fox and Friends it took him about 50 hours to paint. He would later come to host candidate forums and presidential debate watch parties on the yard, he said in an interview with One America News, a conservative broadcaster.

He eventually caught Trump’s eye, getting a shoutout at a recent rally for his congressional run and yardwork.

“He’s a great guy,” Trump said. “He’s in there fighting for whatever the hell he’s fighting for. I don’t care. I love him.”

Majewski has adopted aspects of Trump in substance and style. Media Matters for America, a research organization led by a Democratic operative, unearthed a trove of online comments from Majewski expressing belief in the QAnon conspiracy theory. Some of his QAnon connections are less subtle — he has made media appearances wearing a shirt featuring a large “Q.”

He echoed the repeatedly debunked claim that the election was somehow stolen from Trump by President Joe Biden. He offered no specifics.

“I think the election was stolen, personally,” he said in an interview with political talk host David Pakman. “I think there were extreme irregularities in the election.”

He went on in the interview to confirm his presence at a “Stop the Steal” rally on the Capitol campus on Jan. 6, 2021 as a massive crowd of Trump supporters sought to block Congress from certifying the presidential election. He said he didn’t enter the building.

“United we stand. Divided we fall. We need to finish the wall. They want to raise all our taxes, we done with them all,” Majewski raps.

Campaign finance records show the campaign paid $8,000 in November 2021 to Manifest Billions, LLC. The company is owned by Jason Jensen, a Toledo rapper with writing credits on the song who goes by the stage name J-360.

Majewski opposes abortion access and gun restrictions, supports energy deregulation and “election integrity,” and wants to build a wall along the southern U.S. border, according to his campaign website. He said he’d fight to “abolish all unconstitutional three letter agencies such as the Department of Energy and the CIA.”

He has received endorsements from Michael Flynn, a national security official who was pardoned by Trump for lying to Congress; Roger Stone, a Republican operative also pardoned by Trump for lying to Congress; and U.S. Rep. Paul Gosar, who was recently censured by Congress and stripped of his committee assignments for sharing a video of a cartoonish depiction of himself killing a titan with a progressive Democrat’s face superimposed on its head.

His job history is unclear. His website states he worked at FirstEnergy’s Davis Besse Nuclear Power Station in Oak Harbor. Now, the site states, he serves as a “senior leader in the nuclear industry.” He mentioned in the 419 interview he works at the Davis Besse plant. EnergyHarbor, which since acquired the plant, did not respond to inquiries. Majewski did not respond to an interview request and has not yet filed a financial disclosure with the U.S. House.

Ohio’s 9th Congressional District was considered among the most gerrymandered in the country over the previous 10-year cycle. As such, Kaptur has won her past few elections on double digit margins. However, the current iteration creates a roughly even partisan split, according to analysis from Dave’s Redistricting App. The map in use for this current two-year congressional cycle is the subject of an ongoing lawsuit, presided over by an Ohio Supreme Court that has repeatedly invalidated GOP-passed maps as Republican gerrymanders. However, any ruling is unlikely to apply for the current cycle.

Susan Tebben contributed to this report.